We invite you to our traditional annual UCU Days in September. From 8 to 14 September, we will gather professors, students, graduates, and friends of our university in one place. With interesting conversations and discussions, we’ll talk about 30 years of Ukrainian independence and what kind of Ukraine we’ll build in 30 years. 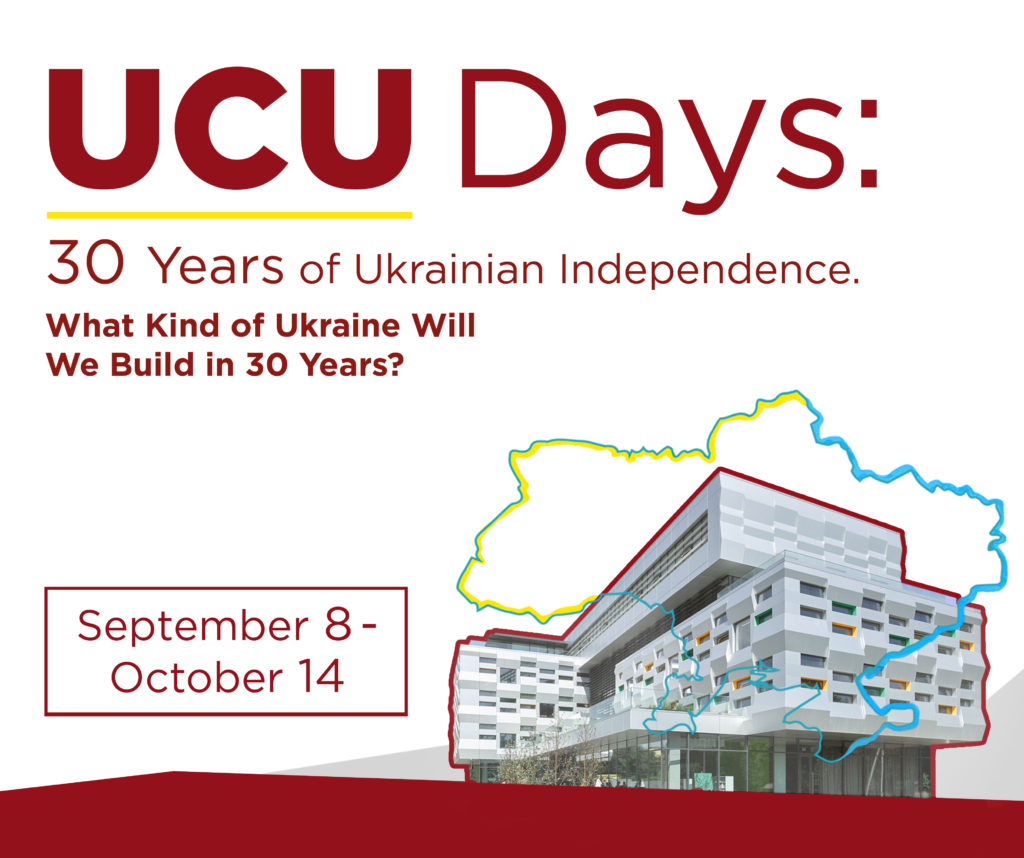 We invite students, professors, staff, UCU graduates, Lviv residents, and all friends to join in the Days of the Ukrainian Catholic University.

What is “UCU Days”?
It’s a week of celebration at the Ukrainian Catholic University on the occasion of the start of the new academic year. UCU Days are an opportunity to get acquainted with our university, to attend open lectures, master classes, and public interviews with invited speakers. It’s also the traditional induction of first-year students and a celebration of the feast day of the University Church of the Holy Wisdom of God.

And this year we also invite all on 12 September to the national festival “Wind of Hope.”

For the health and safety of all, we ask you to maintain quarantine norms. The number of spaces for the events will be limited, so please watch for announcements about event registration.

– Oleh Romanchuk, Director of the UCU Institute of Mental Health and the Ukrainian Institute of Cognitive-Behavioral Therapy

Michael Yarymovych is an expert in the field of space travel in the USA, an active member of the Shevchenko Scientific Society, an Honorary Member of the Society of Ukrainian Engineers in America, Member of the National Academy of Ukraine, Member of the National Academy of Engineering of the USA. He began his activities in the space field in industry, and then joined NASA in projects for flight systems of Apollo. Eventually he started working at the US Department of Defense, where he took part in developing new space projects, the Space Shuttle and GPS. In the 1970s, he held the position of Director of the Advisory Group for Aerospace Research and Development at NATO in Paris. He eventually became Chief Scientist of the US Air Force in Washington. In 1977, Michael Yarymovych became Vice-President for Space and Defense Engineering at Rockwell International. He retired in 1998 from Boeing as Vice-President of International Technologies, and continued consulting with various American and international organizations.

Moderator: Dmytro Sherengovsky, Deputy to the Vice-Rector for Academic Affairs

The event will be broadcast on UCU’s YouTube channel.

Discussion of the UGCC strategy

With the participation of UCU President, Metropolitan of Philadelphia of the UGCC in the USA, Archbishop Borys Gudziak

Annual meeting of UCU graduates
On the program: An open meeting with the UCU Senate is planned.