BACK
How can we escape technological captivity to find a new freedom? 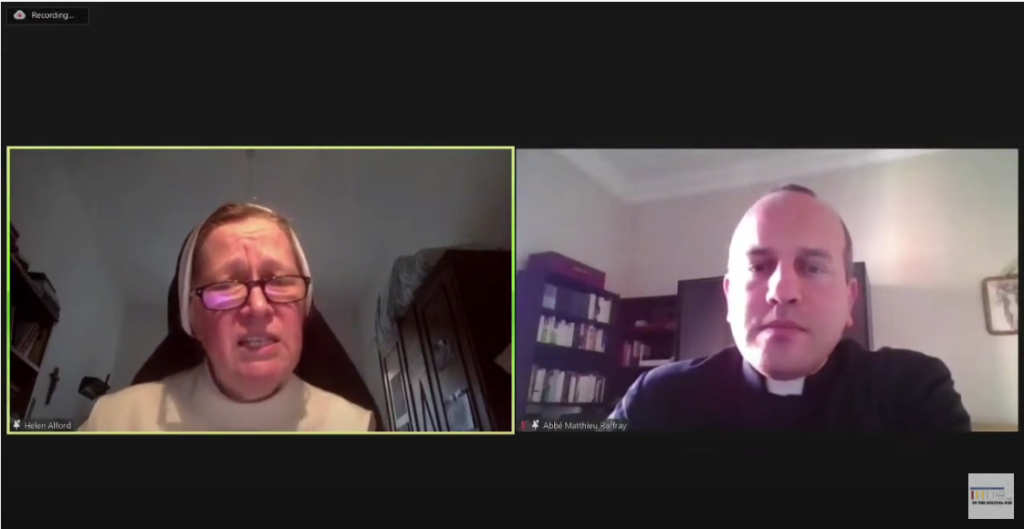 Summary of: “Homo Novus: From Technological Capitivity to New Freedom,” a panel discussion from The Angelicum in Rome, Wednesday, February 24. This was part of the virtual, international 2021 conference on Integral Human Development in the Digital Age: Poverties, Migrants, Pandemics, and the Idea of a New Social Ethics” organized by the Ukranian Catholic University

Humanity has always been devleoping tech, Sister Helen Alford, a philosopher-engineer trained at Cambridge and vice-rector of Rome’s Angelicum, reminded the Integral Human Development conference. She was leading a panel discusssion of the current conflict of society, liberty, and technology.

Alford noted how food containers developed in Neolithlic times transformed society. In the same way, we should see digital tech not as something foreign to humanity; rather we must understand it, how it effects us, and how we can be the ones in control of our decisions. Gabor L. Ambrus, a researcher at the Angelicum, noted that we will not find sustainble solutions by turning away from tech, which will always be developing in new ways. On the other hand, Mattheiu Raffray, professor of philosophy at the Angelicm said we need contemplative purification from tech dominance.

Alford called for a shrewd response speaking the language of the world: we need to resond to the totalitarian tendency of current tech with economics-driven solutions .

Key ideas from each participant, summarized and paraphrased (these are not direct quotes):

After the bubble burst of 2000, Google and others discovered a way to make money out of the internet by tracking what we are doing and building a profile of who we are. From this, they could predict what we might do in the future—great info for advertisers! But then they added a third step: They deployed mechanisms to persuade us to do what they predict we will do.

The advertising is the communication and everything else — news, videos, stories, whatever, is just collateral .
“The limits of my language are the limits of my world,” wrote Wittgenstein.

We lack the language to explain what is going on. We need first to put tech in perspective. It’s not just internet stuff — in Neolithic times, containers for food was a new technology, a massive breakthrough.

Instead of organizing our life around the tech, life should be the purpose or container of the tech. And though we often think of tech as controlling us, we must remember that actually behind the machine is one group of people controlling another bigger group through the machine (not the machine controlling).

How do we solve this? Economics is the dominant discourse of our world; therefore, if we can intervene in tech-control with the mindset of economic actor, maybe we can find the solution.

Throughout her talk she cited the book, Stand Out of Our Light: Freedom and Resistance in the Attention Economy by James Williams, former Google employee and Oxford research fellow.

Our attention span is a commodity, we have become merchandise, and now our freedom is threatened by our very own dependence on the digital: a new form of enslavement. We are captivated by endless suggestions of new videos on youtube, a new encounter with the next click on Tinder, the constant ques for likes and clicks.

To make the addiction work, media hides satisfaction, so we keep looking, keep clicking. We end up with man deprived of his will and freedom, at the mercy of the technology of power. Modern man becomes anorexic with real desire, Facebook replaces real friendships, Amazon has replaced concrete market diplays and connections, pornography replaces real love. Man beocmes depressed because he cannot achieve the impossible imperatives of the pleasure offered him (how many likes is enough?). Technological promises have removed the flavor that desire once possessed.

Only virtuous control of our appetites and desires can help us. The body and its desires are the only cause of wars and conflict. We some purification and deattachment.

Gábor L . Ambrus, Researcher at the Pontifical University of St. Thomas (Rome) and member of the Centre of Theology, Philosophy and Media Theory at the Charles University:

Ambrus spoke of technological totalitarianism and the concept of nothingness. If we seek freedom in our time it must be within tech not outside of it. No authentic and truthful theory of society and invidiuaal is possible without considering the nature and impact of technology. Yet we must resist the “insane drive of self exploitation,” which looks like unfreedom.

TotalitarianIsm enabled by tech is a process maybe centuries in the works. We have a new sense of what totalitariasm means. The total organization of life in which no segment was spared observation and control is now more possible than ever before, enabling totalitarians to shift from focus on the masses to control of the individual in a terrifying way.

We face the constant threat of boredom, met with needless flight from boredom into tech that will ultimately make us more bored. Boredom, or leisure, is the beginning of freedom — but could lead to captivity.

During the Q&A, an audience member noted how his young kid is always bored when he is told to stop using his iPad.

Alford we should expect this reaction: The iPad and the apps are created by the best experts in the world expressly to capture attention. The kid is supposed to feel bored afterwward.

A massive system is set up to break us down, she said. We can’t just be virtuous, though we must start with virtue. Gabor noted that while tech seems to help distract us from boredom, you only end up developing over a long period of time another boredom, a terrifying one, when you see your addictions have not brought you anywhere and you begin to see the cost of it.