On 18 September, staff of the Ukrainian Catholic University and the Ukrainian Research Institute of Harvard University showed the results of their cooperation in the form of a seminar-presentation of an interactive atlas of Ukraine in the great hall of the Sheptytsky Center. 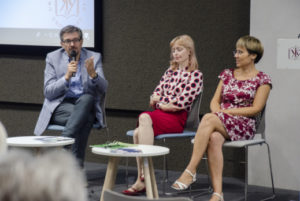 MAPA is not simply the web platform of a cartographic atlas. It’s a full-fledged interactive product with an unlimited amount of variable responses to modern questions. If you’re interested in what percentage of people in which areas of Ukraine are supporting refugees or ATO soldiers, or what was the amount of victims of the Holodomor (Ukrainian genocide), you’ll find answers in visual form right here. In addition, the user can mix a greatly varied menu of questions on the map, comparing them with each other. This is an Internet platform open to everyone interested. It will be of most interest to scholars, journalists, or analysts, or all who research the history and modern society of Ukraine. The project uses the latest innovations in information technology to study key questions of Ukrainian history (the modules Geneaology of Rus, Historical Podillia, Holodomor) and modern social and political geography. 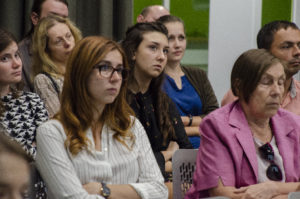 “Re-thinking the history and current status of Ukraine. MAPA. An interactive atlas of Ukraine. This was the name of the seminar, the first part of which aimed at explaining what is ‘inside” MAPA and how to work with it.

“Researchers and journalists often used the project’s data, especially in heated discussions on historical themes, in particular during the latest Russian-Ukrainian ‘media war’ regarding the origin of Anna Yaroslavna, and also in discussions around the assessment of demographic losses of Ukraine as a result of the Holodomor (1932-1933),” emphasized Viktoria Sereda, assistant professor at UCU’s Sociology Department. 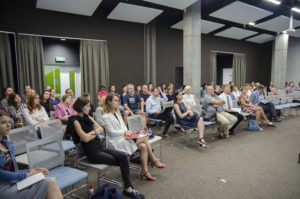 The second part of the seminar on the MAPA project shared discoveries made on the basis of work with the digital atlas of Ukraine. Demographer Natalia Levchuk demonstrated how the introduction of data to the map of the MAPA atlas contributed to the discovery of those factors that caused regional variations in demographic losses during the Holodomor. In particular, historian Serhii Plokhii analyzed the dynamics and geographic dimension of “the fall of Lenin,” that is, changes in the attitude to Soviet and neo-Soviet historical narratives and the regional reflection of these processes on the map of Ukraine: “Ukrainian regionalism, the historical past, and the language question have often been the source of heated discussions or election campaign manipulations. Modern Atlas, the second division of the MAPA platform, allows all interested to conduct on their own a comparative, interregional analysis of identities, language preferences and practices in Ukraine today, to visualize the attitude of residents of the country to the historical past on the basis of the newest sociological data, and to follow the course of the ‘fall of Lenin’ after the Euromaidan.” 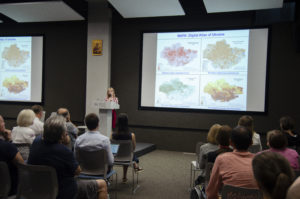 In her turn, sociologist Viktoria Sereda considered the problems of macro-regional presentation of sociological data and regional particularities of the attitude to the past and the language question in Ukraine.

We want to add that researchers at the given time are developing and perfecting the language module of Ukraine, in particular by adding information regarding the most varied divisions, like communicating in Ukrainian, Russian, a mixture, and bilingualism. And they also are researching the practical dimension of one or another language at home according to the division into highly urbanized cities or regions. 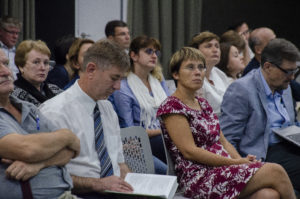 This is already the second presentation and acquaintance with the given project at UCU. The first presentation was held in 2017 for students of the sociology program (http://sociology.ucu.edu.ua/mapa-presentation-2017/)