The discussion about the current situation in Ukraine took place within the Annual International Conference Series within a broad theme titled Integral Human Development in the Digital Age.

We present the final thesis. 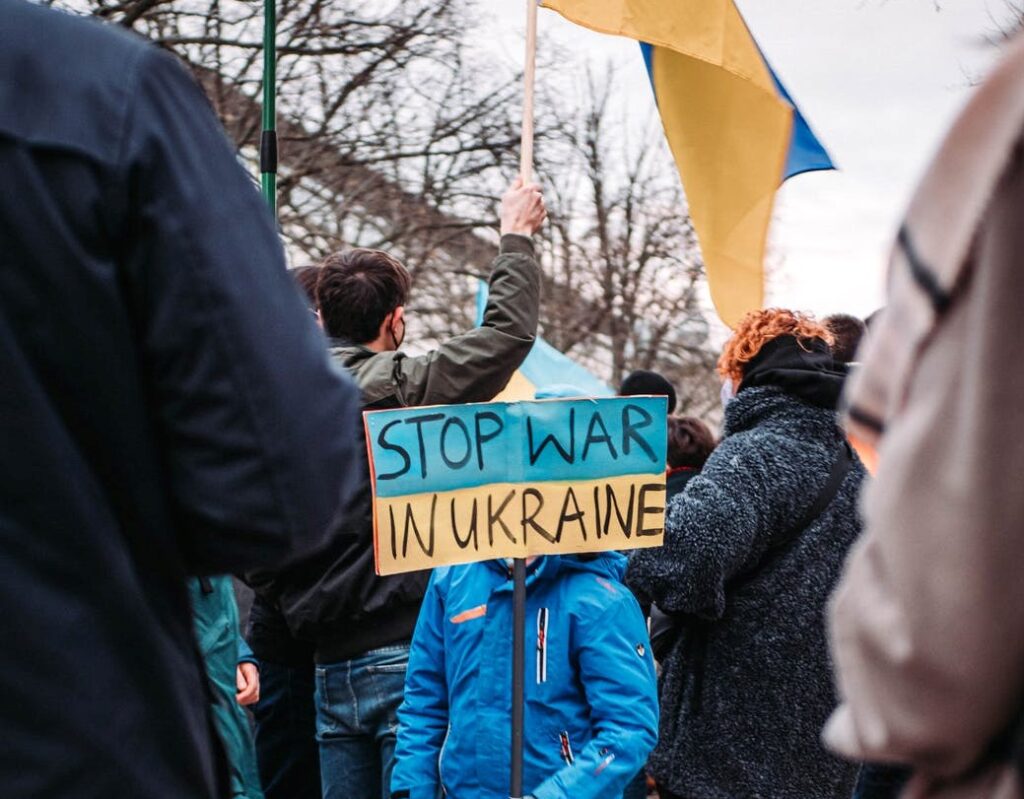 All of us are in a very difficult situation right now and I want to give some impressions that struck me the most.

A column of enemy tanks was actively moving deep within Ukraine. To stop it, a decision was made to blow up the Henichesk automobile bridge. The engineer of a separate battalion, Seaman Vitaliy Skakun, volunteered to perform this task.

The bridge was mined, but Vitaliy didn’t manage to get off it. He contacted his fellows, informing them that the bridge was being destroyed and then an explosion was heard.

Also impressive are the lines of dedicated volunteers who are working to supply and support the Ukrainian army, and they don’t stop for a minute.

We are also impressed by millions of donations from ordinary Ukrainians and people from all over the world to fund our ability to resist.

I also see the faces of Russian prisoners who are lost; they really don`t understand and they’re really lost, totally confused.

Oksana Kulakovska, Director of the Analytical Center of UCU

We appreciate the involvement of international scholars in this most difficult moment in our history as a sovereign country. It is a decisive moment for all of us, but I can’t be really pessimistic. In order to understand how we have to deal with this situation, we need to understand that the enemy wants to eliminate our country. We can see a dozen examples which will build not only the history of our country but also of the whole world.

We need different kinds of support from the world community – Can we expect it now? – This is a big question.

The first thing that has to be done – Russia will do everything to behead our state and annihilate our will in days. This really unites all people under that threat.

The Church in Ukraine has great respect in society. In no other country of Europe do religious communities have such strong influence. The Church is a strong social actor that unites Ukrainians for the fight. The Russian aggressor uses the Church and religious narrative in an entirely different and completely unacceptable area. It uses the Church and religion in a criminal way, to legitimate the evil which it is doing.

Building the peace process is important – we need to reconstruct the security situation in Europe. The church needs to be involved in that.

We see quite a grim picture, but it`s realistic. The message for Ukrainians is grim, but also for Europe and Russia.

I can’t express what all Ukrainians are now experiencing. Here in the USA, many of us are trying to convince our politicians and establishment that the fate of Ukraine is the fate of the whole world. We see manipulation on the part of the media and some politicians in Europe and the USA, though my humble goal is an attempt to understand and explain the situation in Ukraine to Americans. Unfortunately, for too long we’ve had the illusion that Putin will come to his senses.

What’s happening in Ukraine can happen anywhere. Many politicians use the situation in Ukraine for their own political games. We, however, are trying to do everything necessary so that the USA will get involved as much as possible to change the situation.

I’m very happy to see you all, regardless of all the circumstances. The world is united, after the fact of encountering evil, unfortunately. Many western intellectuals who supported Russia have now changed their minds. To a significant extent, this became possible through the voice of Ukrainian intellectuals, and also of those scholars from all countries who study Ukraine.

In fact, you’re fighting public thought in Europe, which is fairly pro-Russia, and they are trying to balance between interests. The media repeats Putin’s message and we have to make more space for the Ukrainian voice in the West.

We should begin the process of the legal trial of Putin right now so that they understand what awaits them in the future.

The day Russia invaded Ukraine we received many messages from the Nanovic community in support of Ukraine.

It’s important that we inform the world that Ukraine is a cultural pearl, a country of deep religious faith, a country of significant literature and beautiful operas.

All of us need to give a testimony of prayer and to witness to the truth. The Notre Dame community joins all its forces in support of the Ukrainian people, who are fighting for their freedom.

Now I`m in Paris, ceaselessly speaking with people, meeting with people. With all our might we’re trying to unite the civilized world.

Now we must unite university all over the world with the goal of supporting Ukraine.

As with all of us, I’m a bit off-balance – Ukraine needs global, united international solidarity. Bringing students together and becoming retranslators of what is going on. We need to help students go from fear to dignity, as it was during the revolution of dignity.

People are coming together. We pray, and people and soldiers are becoming strong. I pray for Putin’s conversion and a miracle. And the Lord will not stop doing great things.

About three illusions of the West:

Putin will not stop at the Polish border. His next goal will be to revive the USSR and get NATO out of Eastern Europe.

The West says that they are giving us everything possible and that more support will be a cause of World War III. However, the West’s half-heartedness can lead to difficult consequences for the world eventually.

We know about the importance of values: Jesus never betrayed His values, even before the face of death, and we should demonstrate this to everyone in the West. It is Ukraine that is now in the forefront of defending the most important human values.