People of various ages and professions from various corners of the world have for 16 years now been coming to the UCU School of Ukrainian Language and Culture. Among them are political scientists, diplomats, historians, students, and even schoolchildren. (In the time of the school’s existence the youngest participant was 8 years old and the oldest 82). 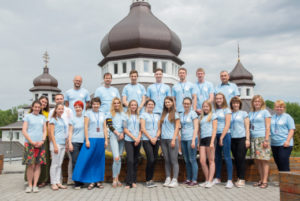 They study Ukrainian here, make trips in the country, become acquainted with Ukrainians, research culture and traditions – that is, they become immersed in the environment. The most important rule for all is to be open to communication and speak the Ukrainian language.

How it all began

The idea of the School of Ukrainian Language and Culture arose in 2002 when a group of students from Canada who wanted to study the Ukrainian language came to UCU. Jeffrey Wills then thought that, if there’s a demand, a Ukrainian-language school should be created. And so was born the idea, and a year later the first school was held, lasting approximately a month.

At that time Nazar Danylkiv, current director of the school, was still a student and joined the program in 2005. He worked there as a tutor and at the same time helped with organization. In 2016, Nazar became director of the school. (Up to that time it was headed by Roman Vaskiv, who today helps UCU from the USA.) Under the direction of Nazar Danylkiv the school expanded its activities with new programs (the Carpathian program, educational tours for organized groups, etc.) and publishing and methodological, and research projects. The school now continues to grow in numbers and in quality.

In 2005, teacher Mariana Burak joined the team and in 2008 became the school’s academic director. This position was really necessary because the number of students, who up to that point had varying levels of fluency in Ukrainian, was growing, and some of them took part in the school for a number of years in a row. So naturally the need arose to structure the educational process, give it variety, and adjust to students’ needs. 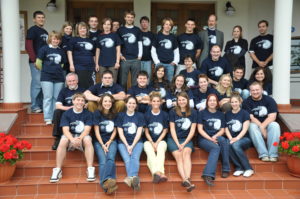 Eventually, in 2010 the school’s team decided to improve the instructional materials which the teachers on their own developed over the years of teaching the program, to make it more interactive and, at the same time, accessible for participants with varying levels of knowledge of Ukrainian and to publish a series of instructional sets.

“We thought that this wouldn’t take much time, because we had done all the work already which, it seemed to us, was necessary to simply systematize it,” says Mariana Burak, author of the first part of the set. “But it turned out that these materials were only a small part of what eventually formed the instructional set ‘Yabluko.’ There was much work, and over the next five years we worked on compiling, structuring, and designing the instructional-methodological set, which now is composed of a textbook, notebook, exercise games, and audio materials.”

The next challenge was to find teachers of the Ukrainian language who could master modern methods of teaching foreign languages. “When the school was founded, didactic methods for teaching the Ukrainian language practically did not exist, and we needed to find our own ‘know-how,’ relying on methods for teaching English,” says Mariana Burak, who is also an experienced and degreed teacher of the English language. “Luckily, in the first years of the program’s existence volunteers of the US Peace Corps shared their work with us, and this radically changed our views on our own language, its structure, and how themes can be explained.” 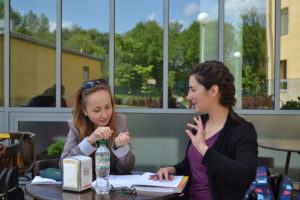 All those interested can take part in the school. Potential participants are tested and interviewed to determine the level of their fluency in Ukrainian and to understand their motivations and individual desires. In this way the participants are divided into groups, beginning, intermediate, or advanced.

Some want to perfect their written language, some their spoken. Considering the personal motivations of the participants, the school tries to make the study of language as natural as possible, with context and situation. This would not be possible if they attended usual language courses in their countries.

“We try to satisfy the individual needs of the students, but at the same time we give information in the liveliest language, in context,” explains Mariana Burak. “Very often teachers, in addition to excursions planned as part of the school, prepare separate scavenger hunts with concrete tasks, where students in real, daily situations have to perform their tasks, using the Ukrainian language. We also study very practical matters, how to proclaim greetings and wishes, write postcards to one another, bargain at the market, and buy food, souvenirs, and flowers.”

The so-called “Carpathian program” which the school offers gives particular immersion in natural interaction. The participants spend the first two weeks of the summer semester in the Carpathians. 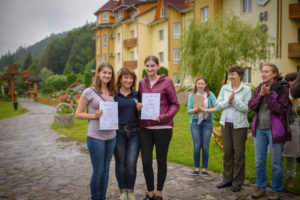 “From morning to lunch they have Ukrainian language lessons with professional teachers. In the second half of the day, excursions, workshops, mountain hikes, rafting… And in team situations like this the instruction is intensive,” says Nazar Danylkiv.

And Mariana notes that, as academic director, she at first did not understand the purpose of activities like rafting in a language program and was very surprised when she saw its real effectiveness. “It worked,” says the teacher. “Repeating the same commands in extreme situations is very effective. After such adventures, students at even the lowest level knew words like ‘careful,’ ‘head,’ ‘legs,’ ‘right,’ ‘left,’ and many others.” 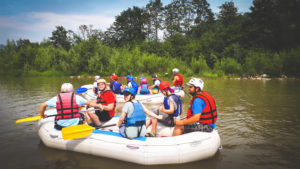 So the Carpathian program, first of all, distinguishes the UCU School of Ukrainian Language and Culture from other similar schools. A second particularity is tutoring.

Olena Synchak, teacher of the Ukrainian language and author of the higher level of the “Yabluko” textbook, explains in more detail:

“In addition to lessons with teachers, our participants have separate assignments with Ukrainian students with whom they practice language, carry out assignments, read, and interact. In advance we speak with potential student-tutors and then we tell those who are chosen about teaching methods and we give guidelines.  This is a good start for students, some of whom eventually join the school as teachers and even become co-authors of our textbooks.” 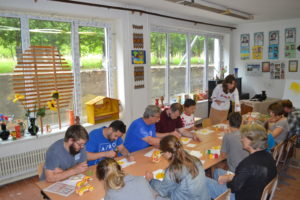 In addition to teaching the Ukrainian language, the school also offers lessons in Ukrainian history, political science, economics, and the development of computer education and IT. The teachers really have a number of challenges because they can’t teach the same for each group.

“First you teach people, their needs, interests, and motivations, and you do everything so that they can work comfortably. And only then, when you’ve learned well the particularities of the group, you prepare lessons very quickly and share with your colleagues what works and what doesn’t,” says Olena Synchak. “Once at university they taught me that first it’s necessary to learn the rules and then, accordingly, to carry out your assignment. When you use this approach with a foreigner and say ‘learn this rule, its 20 exceptions, and then do the exercises,’ this doesn’t work. Instead, only by studying the needs and particularities of a group can you understand how and in what form to present material.” 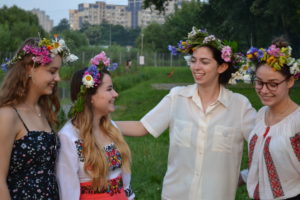 In order to improve the program, the school’s organizers at the end of each week ask for students’ comments.

“Participants fill out a form about academics (quality and the appropriateness of the instructional materials and teaching) and organizational matters (food, lodging, etc.),” explains Nazar Danylkiv. “Then we analyze all this and talk it over together with the students. We often receive much advice from them about how to improve the school.”

How rules work at the school

What school has no rules? The first rule of the School of Ukrainian Language and Culture is to speak in the Ukrainian language. The second is that Wednesday is presentation day, when all the groups prepare presentations on a particular theme and then discuss them. Third, every Friday participants take a test on the materials covered that week. The fourth rule, which is for staff of the school, is to gather the participants’ written materials and eventually to publish them in a special newspaper. 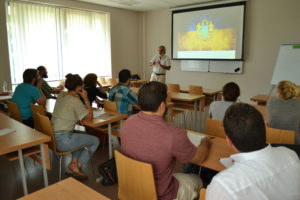 “At the end of the semester the students give their written materials for a summary assignment. Then the teachers edit them, give them to designers, and make a special newspaper. And only on the concluding evening do the participants receive it as a gift and, unexpectedly, they find their texts there. This is always a very emotional moment,” says Olena Synchak.

Who are our participants?

People of various professions and from various corners of the world come to study Ukrainian at UCU. Many are diplomats. In the 16 years of the program’s existence, students have been diplomats from the USA, Canada, Poland, Great Britain, France, and Japan.

In addition, the program generally has a great number of historians and political scientists and sociologists who are studying Eastern Europe. “This year’s program had a Fulbright scholar researching the history of the Jews in World War II on the territory of Transcarpathia, and also students studying the Holodomor and genocide who for their research needed to read much literature or archival documents in Ukrainian,” says Mariana Burak. 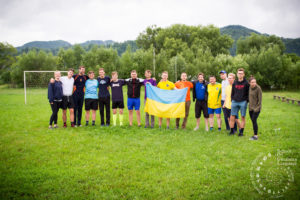 “And we have many translators, like Robert Chipok, who translated the verse of Ivan Franko. He was at the school in summer 2016 and then for three years has continued to study the language with us through Skype. Another student of ours, Danylo Aleksandr, is a professional translator at the Council of Europe and works with official documents. There was also a translator from the UN who was born in Ukraine and is fluent in Ukrainian but after years of living in Britain she decided to improve her knowledge,” adds Nazar Danylkiv.

There are also participants who are students in Slavic studies. Also students from Columbia and Michigan universities in the USA and Monash University in Australia came for UCU’s program. “Often, in addition to Ukrainian, they are studying other Slavic languages,” says Olena Synchak. “These are students at a high level. They’re very motivated, creative, and, as a rule, go right into the very strong group.” 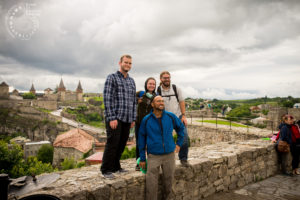 Yet another interesting participant is future priest Alex Bricki, who is at the program for the sixth time. Alex works in an individualized program. He analyzes Holy Scripture and is learning to give sermons.

It is interesting that the School of Ukrainian Language and Culture has participants of various ages: the youngest student was 8 years old and the oldest 82. The latter was Fr. Manuel from Portugal. The history of his becoming enthused with Ukrainian is very interesting.

“It started when Fr. Manuel went to Great Britain to study the English language and there became acquainted with two Ukrainian nuns. After their studies, they all returned to their countries. From Ukraine the nuns sent Father a Christmas greeting. It had an image of books with inscriptions in Cyrillic. And suddenly Fr. Manuel was very upset that he couldn’t read them. That was his whole motivation: ‘I want to know what’s written there, so I will study Ukrainian,’” explains Mariana Burak, his former teacher. “Then Father came to the UCU school twice, and twice he was unquestionably the group’s favorite. Students, in particular of a young age, simply adored him and listened with great satisfaction.”

It’s important to note that after studying at the school the participants continue to meet, interact, and tell their friends about their study. Some of them admit that their universities do not always have the level of instruction and conditions for teaching that are here at UCU. 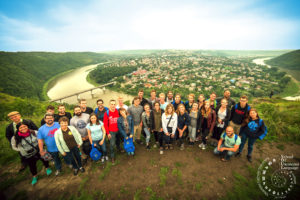 You can read more about the School of Ukrainian Language and Culture here.