On 20 February, the fourth anniversary of the memorial of the new heroes of Ukraine, the Heavenly Hundred, a memorial event was held in Staryi Sambir. With the prayer “Bozhe Velykyi
Yedynyi” [God, Great and One], a procession began from St. Nicholas Church to a memorial to the heroes of Ukraine, where a hero of the Heavenly Hundred, Bohdan Solchanyk, historian,
graduate of Lviv National University, teacher at the Ukrainian Catholic University, representative of Ukraine’s scholarly elite, who was killed by a sniper’s bullet on the Maidan on 20 February 2014, is buried. 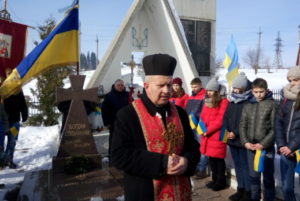 Participating in the memorial events were the pastor, Fr. Mykhailo Nykolyn, together with the assistant pastor, Fr. Ihor Podan, Rector Fr. Bohdan Prach of the Ukrainian Catholic University
together with university chaplain Fr. Taras Ostrovskyi and military chaplain Fr. Ivan Halyo. Also present were representatives of the city and district government, faithful of the church, numerous youth who led the procession with state banners, and close family of the young hero. 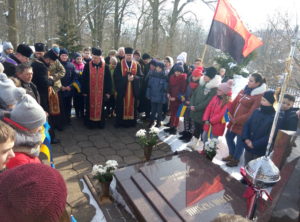 When they reached the burial site, a panakhyda [memorial service] was celebrated. In his speech, the rector of UCU reminded all present not only about the sad moments of those stormy events four years ago but also about the bright and always smiling face of young Bohdan: “He will always remain in our memory as a fighter for truth, justice, the dignity of the citizenry, as one who loved his country and people. He was always ready to sacrifice himself to the end. And so we must come here, when it is difficult for us, to gain inspiration for daily work and our life, to live it responsibly.” After Fr. Bohdan’s speech, all the event’s participants sang the Ukrainian anthem. 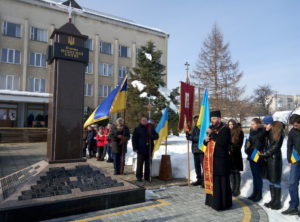 Then the whole community prayerfully processed to the square of the Heaven Hundred heroes, located across from the city administration. Joining the memorial activity were residents of the
city and students who also came to honor the memory of new heroes. After the panakhyda memorial prayer, Fr. Dean Mykhailo Nykolyn spoke: “For us questions and doubts arise: Was this sacrifice in vain? For this ‘passion week’ has continued four years. But we must remember that after Good Friday, the sufferings of Our Lord, victory over death, over evil, comes to us. Light comes to us, the light of Christ’s Resurrection, which transforms us. So we do not doubt but believe that the Lord is with us!” At the end of the memorial prayer a requiem was held in honor of the lost heroes.