This year the community of the university’s friends and benefactors gathered for the 12th time for an UCU celebration that supports the future of Ukrainian education. With their joint efforts through the festive Saturday evening, the guests provided 56 scholarships for students and teachers! And two million hryvnias of the general sum of the donations is to be spent on building a new sports field. We’ll now tell you what was on this year’s program, in addition to traditional embroidered shirts, sincere smiles, and fun. 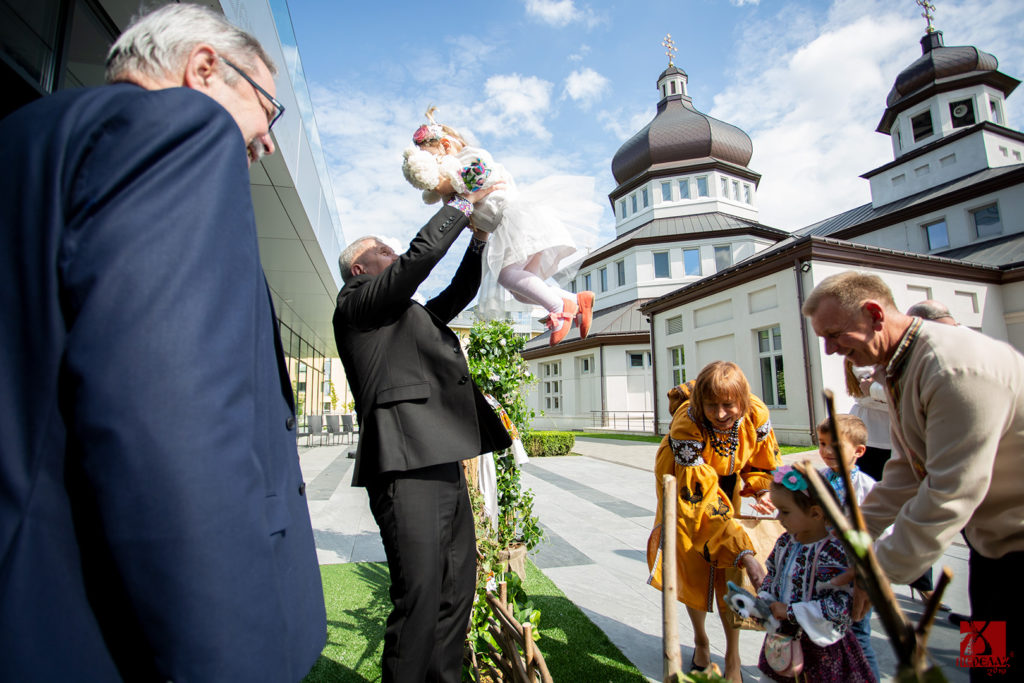 The symbolic perelaz (stile) at the entrance, an open-air barbecue with musical accompaniment by Viktor Vynnyk (the rock group MERI) and the Polish rock group H.O.R.P.Y.N.A, and children’s games were all part of Perelaz 12.  Also, as usual there was on the program a charitable auction during which Lviv benefactors were able with their bids to help not only talented university students but also Ukrainian artists who specially donated their paintings for UCU’s charitable activities. For 12 years this celebration of mutual support and sacrifice has gathered Lviv benefactors into one big family. The majority of guests were not participating for the first time and some of them have not missed one of the 12. 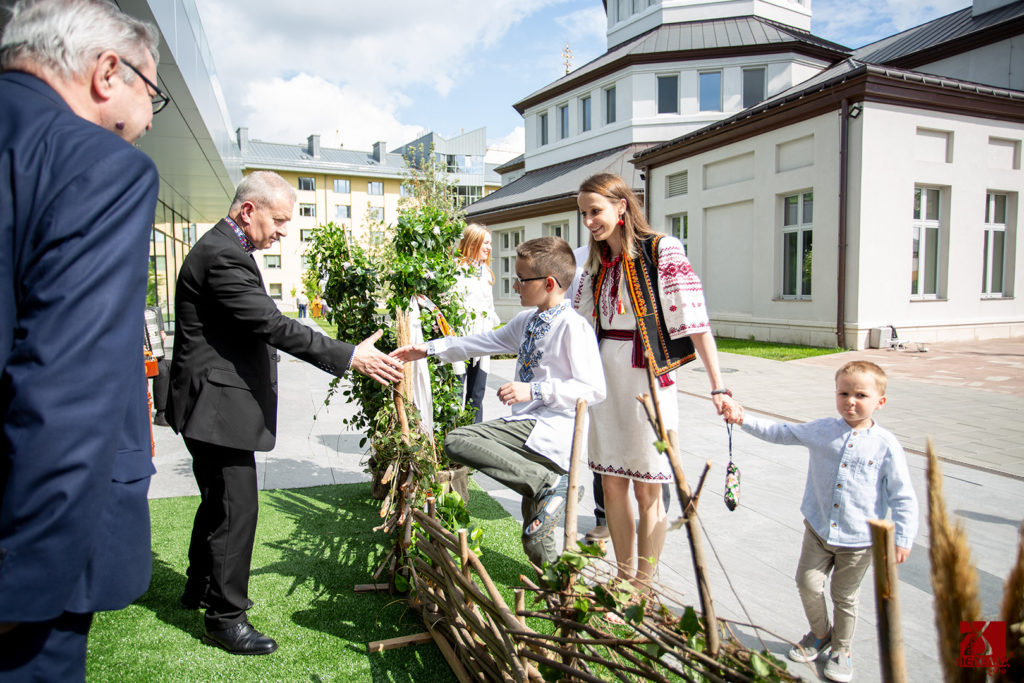 Sofia Havryliv, who has not missed one of the 12 perelazes, admits that, of all the year’s celebrations, this is her favorite. “Here there’s always a pleasant and friendly circle of acquaintances, a real family. All are dressed in national attire, happy and friendly. My family and I have supported the university all these years, because we consider that here they are fostering our Ukrainian future,” explains the young lady. 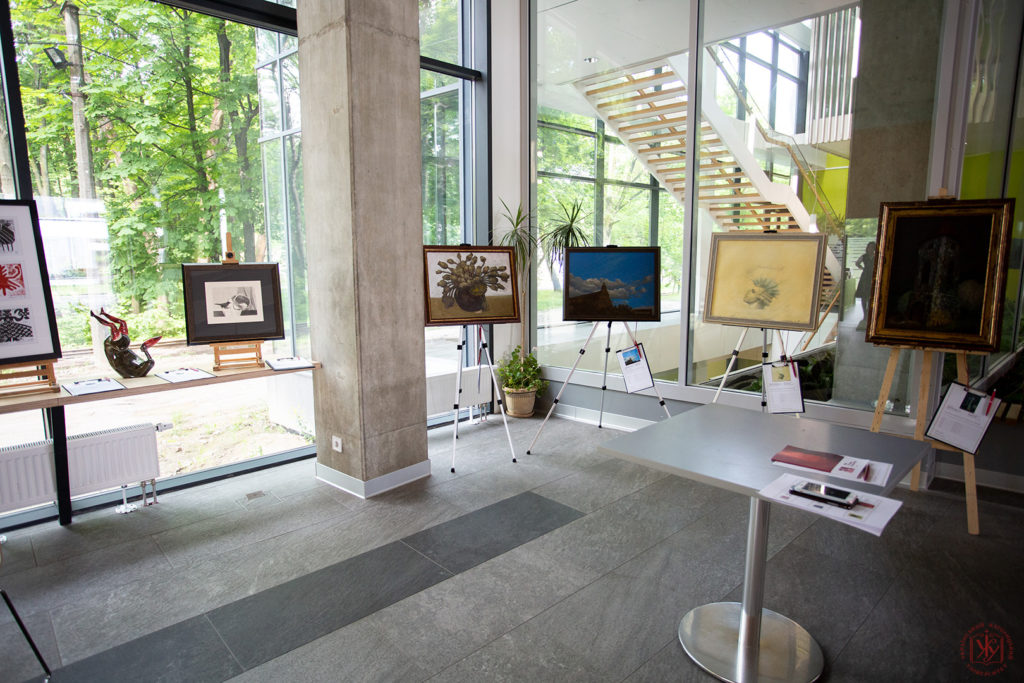 This year there were almost no differences from the traditional program, though it was at another location for the first time. From the usual and cozy Khutorivka, this year Perelaz moved to the campus on Kozelnytska. But the guests felt that the change of location did not change the warm and friendly atmosphere. 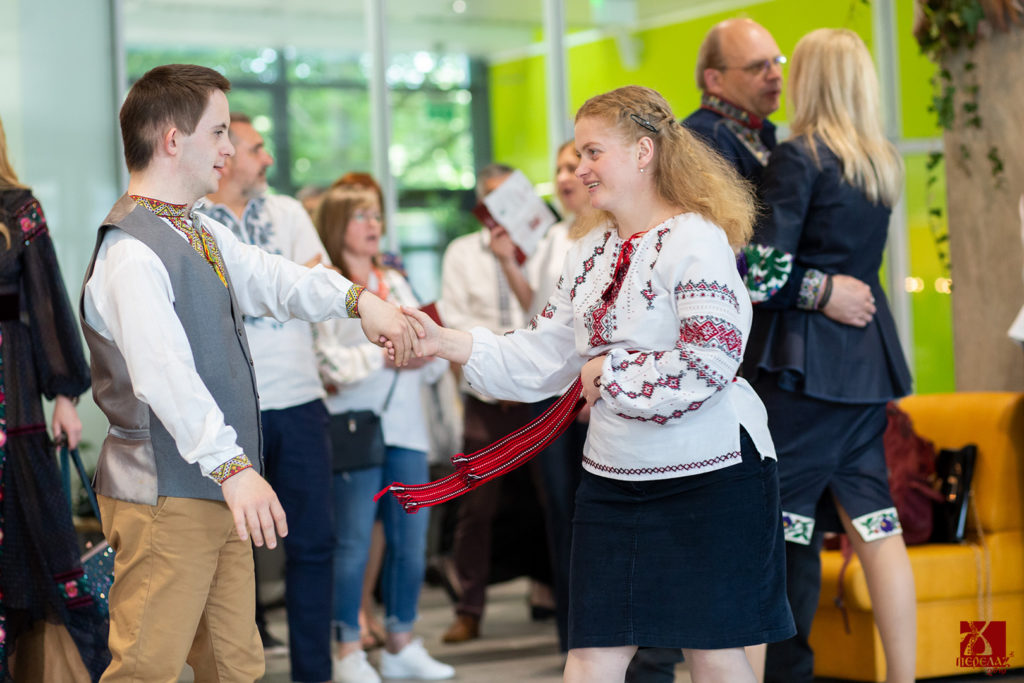 Lilia Bilas, co-founder and partner of the Creative International School for Children in Lviv and Kyiv, who has attended Perelaz since it started, says that, although there was a more intimate atmosphere on Khutorivka, she and her family feel fine at the new location: “I am very impressed by the university, a big supporter of it. My family and I follow its development: it’s growing at an unbelievable pace. We are confident that in the near future it should become the center of the changes which it was created to make,” she says. “I love this event: the atmosphere here is always inspiring and very needed by all of us,” she adds. 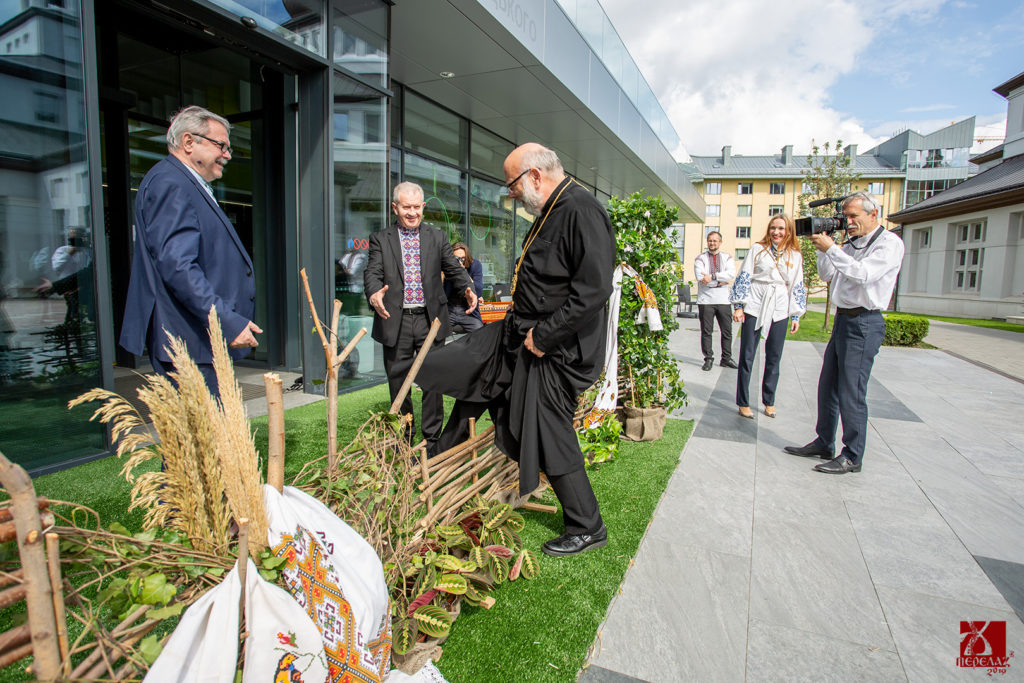 The organizers also prepared a separate program for children, of which there were more than 100 at the event. The children’s corner was set up in the dining room, where the small guests could play and eat fruit and burgers. “Today we are learning to trade, to understand what money is, and to learn how it circulates. It was fun to do this here. We prepared a whole scavenger hunt with points where they can spend or invest what they earned.” So the organizer of the children’s corner explained the details of the game. 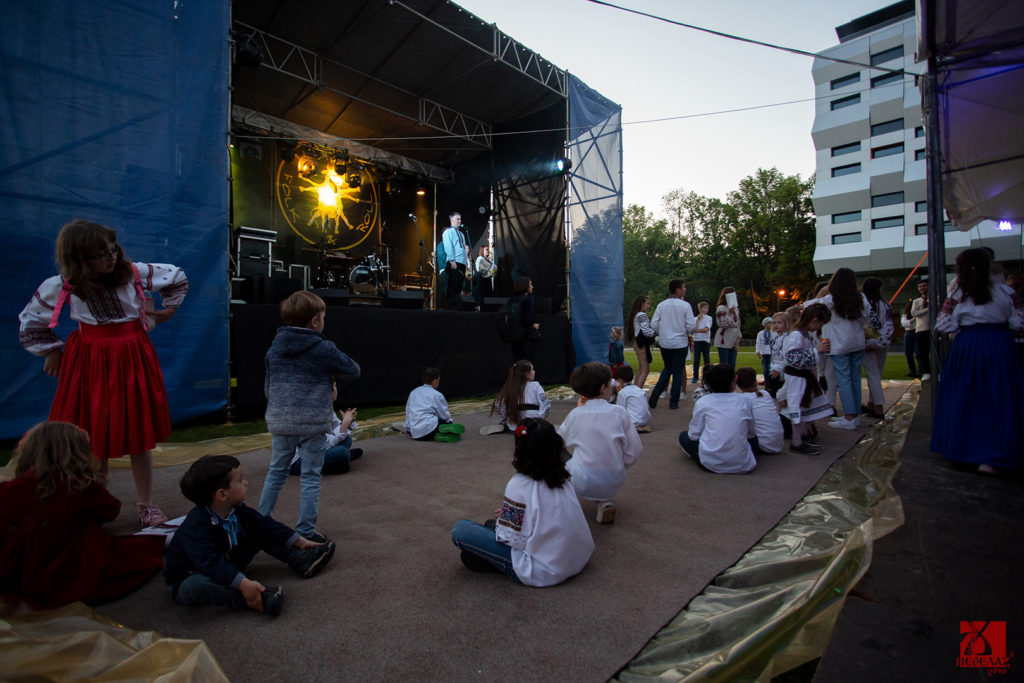 Nazar and Nadia Turkhan explain that they have attended Perelaz from its very beginning. “We came to the first Perelazes only with our son Ostap. But today we have three children. And the celebration touches their souls. Each one can find an interesting corner, relax, and have fun,” says the couple. “If we want Ukraine to be in a position to be successful in Europe and the world, we need wise students and wise teachers. Without education, it’s impossible to develop,” they add.

For the adults, a stage and food court were set up on the lawn by the University Church of the Holy Wisdom of God, and the official part of Perelaz was held in the Great Hall of the Sheptytsky Center. 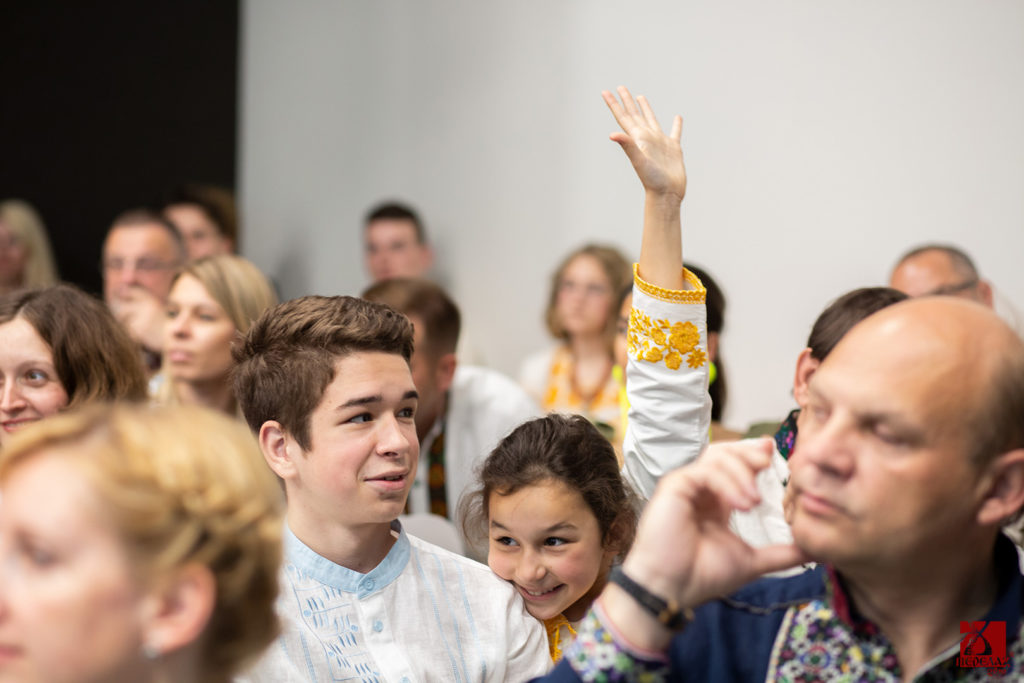 In his word of greeting, Fr. Rector Bohdan Prach invited the guests to treat the folk-ball as a nice opportunity to fill their hearts with a friendly word and converse without worrying about today’s stresses: “In a turbulent and troublesome time, remember our university’s friendly circle, where you can always find cheer and smiles,” he added, and invited the evening’s honored guest, Bishop Ken Nowakowski, to join in a short prayer to begin the festive evening with a blessing. 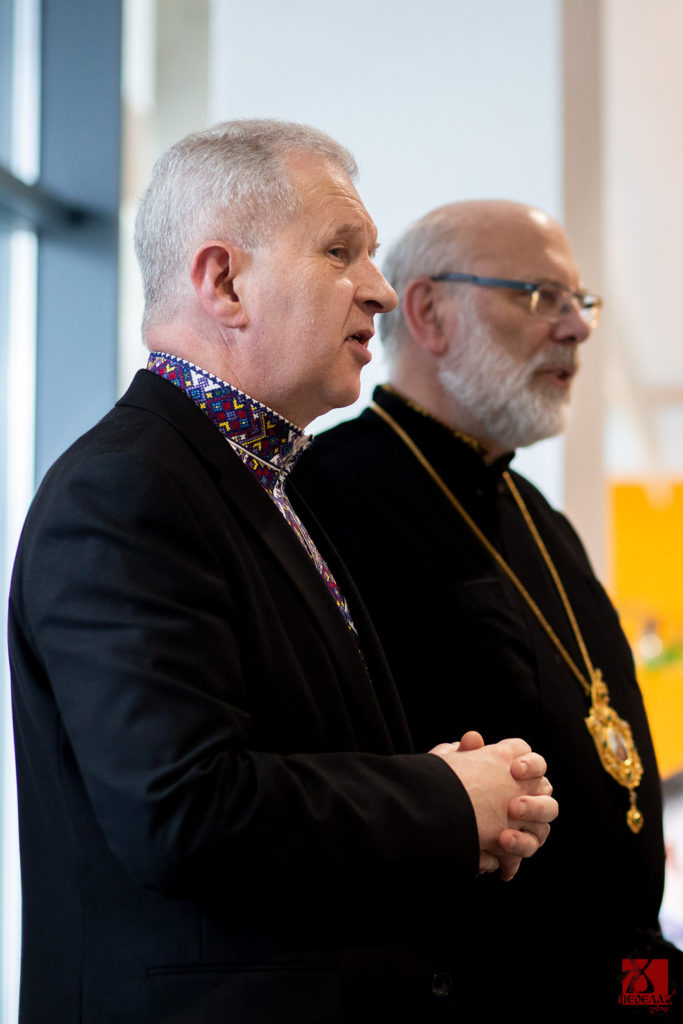 Before the auction, one of UCU’s most successful graduates, Andriy Andrushkiv, greeted the guests. In 2007 he graduated from UCU’s Faculty of Theology and Philosophy. Today he heads projects at the civic organization Centre UA.

“The country needs cornerstones, for balance. And this university is one of them,” he told the guests. “I thank you for your support, so that UCU can do this today for this city and this country. And I am also grateful that, thanks to you, this university can plan for tomorrow.” 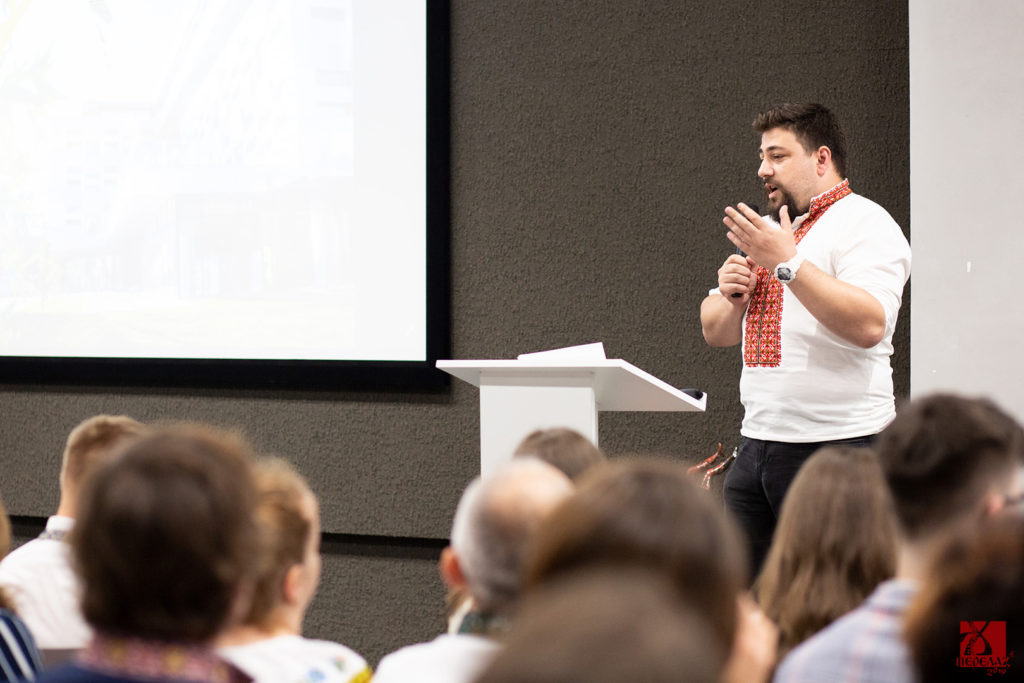 In his speech, he mentioned the medieval story of the pied piper of the city of Hamelin. “In the German chronicles, it’s recorded that in 1284 a large number of rats entered the city. The rodents not only looted cellars in search of food. There were so many of them that even the city’s cats and dogs hid from them in corners. The aggressive rodents bit children in baby-carriages,” said Andrushkiv. When the magistrate announced he would grant any wish of the person who could save the city from the rats, suddenly a strange man with a flute appeared on the streets, offering to help. But seeing how easily the piper managed to perform his task, the authorities decided not to pay him. Time passed and the piper left the city. When he returned, he played on his flute and, before the eyes of the enchanted adults, he led out of the city not its problems but its children. 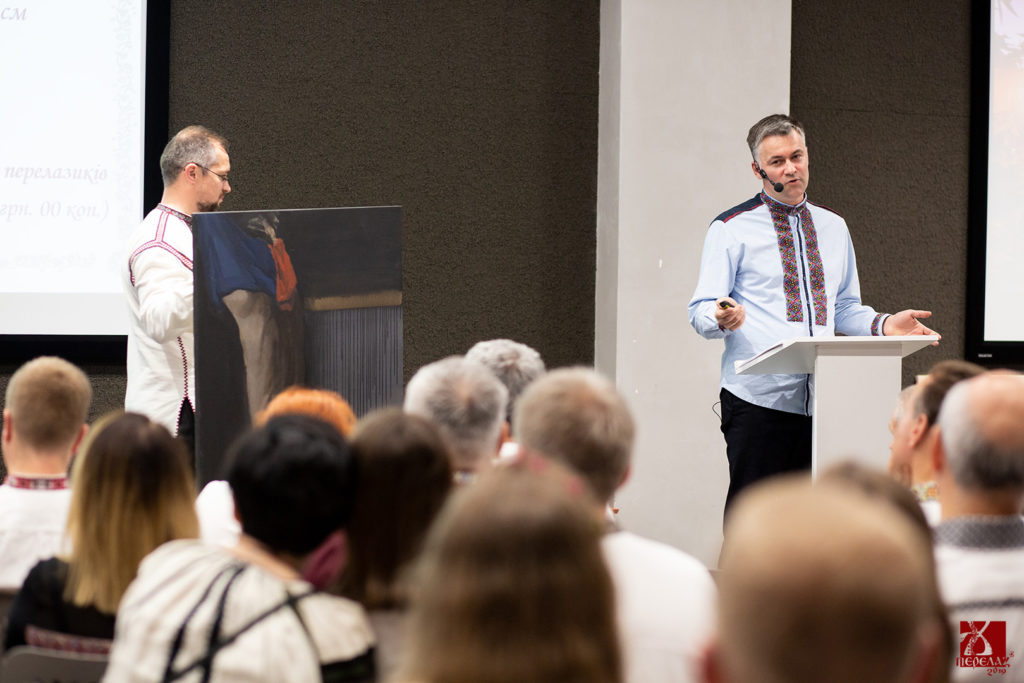 Rejecting the traditional interpretation, with the moral “promises must be kept,” Andriy Andrushkiv suggested the guests turn their attention to other aspects of this classic story. “Why did the government make this agreement? Because it was sure that the piper wouldn’t be able to fulfill his promise, and then the magistrate would have the option to throw up his hands and say: ‘We did everything we could.’ But the sad and instructive conclusion demonstrates that decisions that are too simple and painless must be paid for in the future,” he concluded. 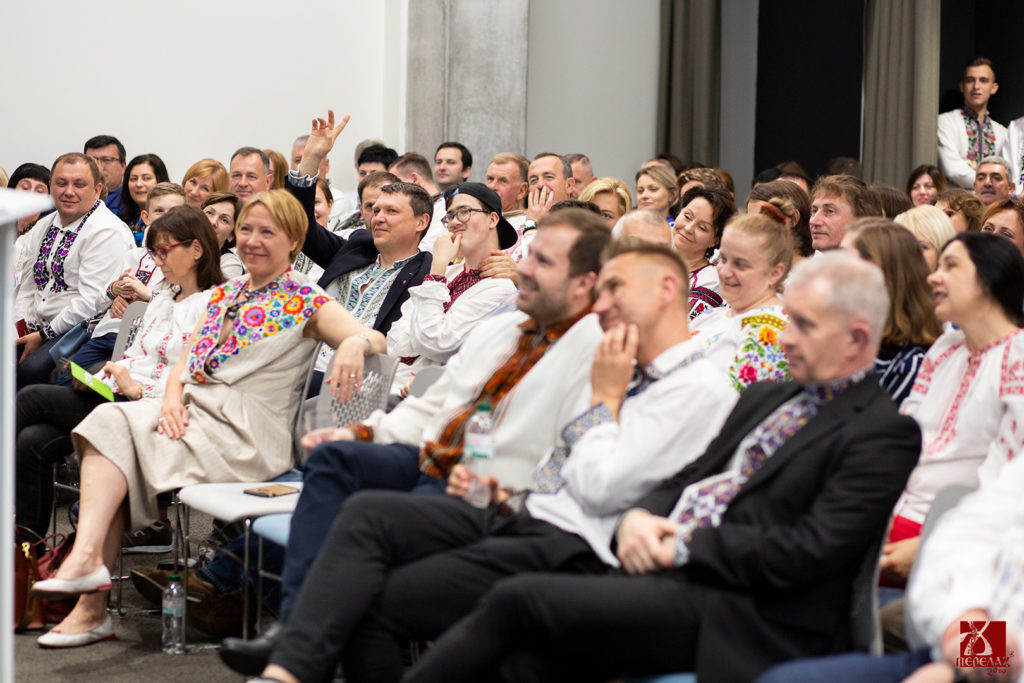 “Today we read that today’s political situation in Ukraine is a manifestation of such a piper. But is this the first time we’ve seen this in the government? The intelligent books that UCU’s professors suggested I read teach that working institutions and civil society will help avoid the appearance of decisions that are too fast and simple. Under those conditions, the temptation to rely on a ‘magic wand’ won’t appear,” added the graduate. 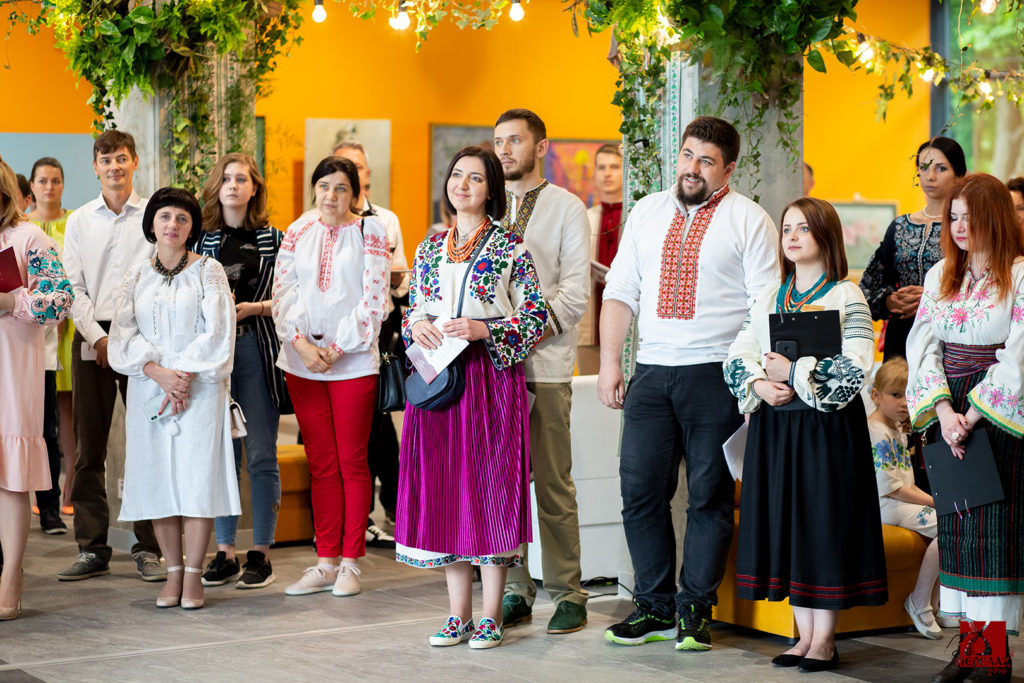 “Thank you for allowing this university to grow. I am grateful that, thanks to your support, each student, already at the planning stage, understands: ‘You can’t do this on your own.’ Thank you for creating a place where doctors and HR managers, theologians and programmers, deputies’ assistants and business owners have the opportunity to talk over problems and look for solutions together,” said Andriy Andrushkiv in conclusion.

Archbishop Borys Gudziak also prepared a video greeting for the guests. Standing on Mt. Tabor, the UCU President thanked everyone involved in the university’s ongoing “transfiguration”: “You serve and you show us how to serve. You are generous and you show us generosity. Thank you for an evening so life-giving for our university.” 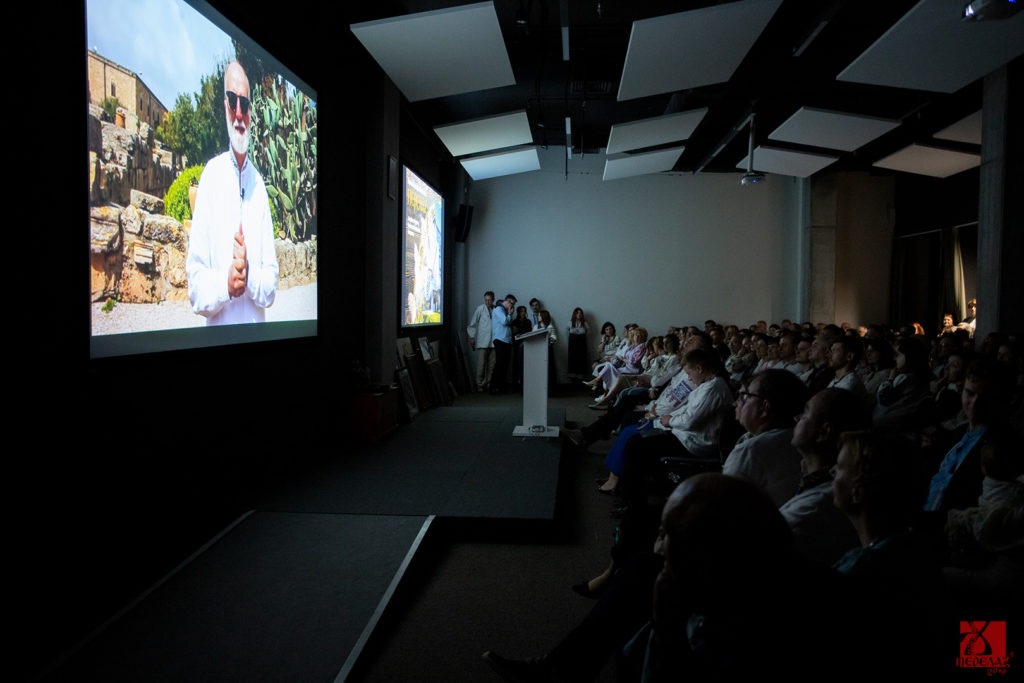 Yet another guest of every Perelaz, Halyna Yosyp, states that every year she and her family rush to the celebration: “We really love the celebration’s atmosphere and the feeling of the union of Ukrainians. I understand here how much we can do together for our country and our future.” 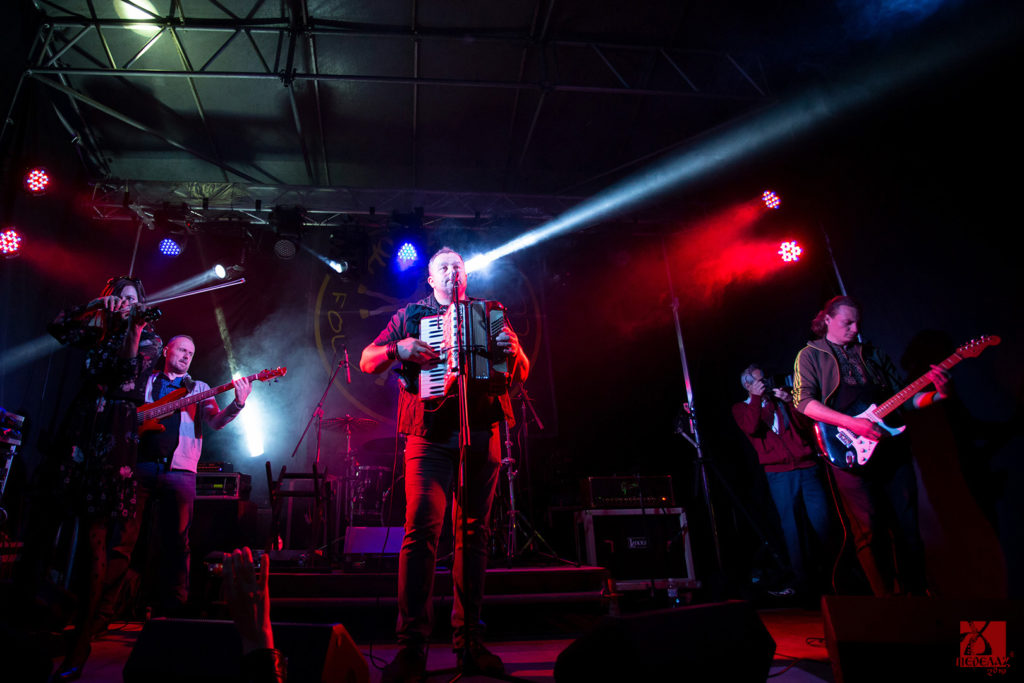 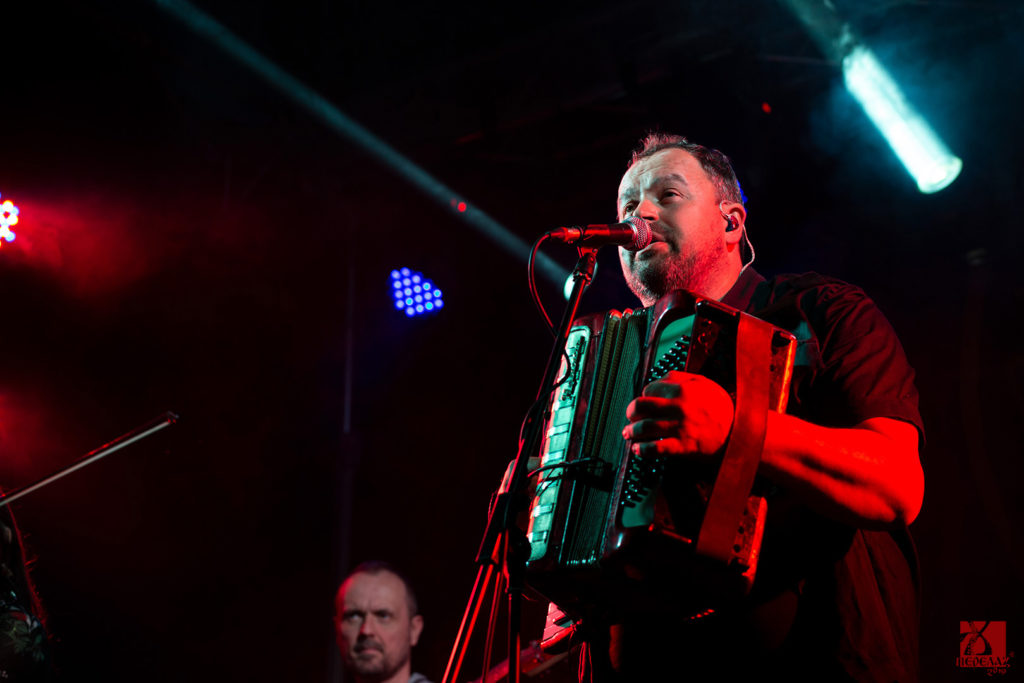 Lesya Kurylkevych, who came to Perelaz for the first time, also confirm that she feels very comfortable: “Though this is my first Perelaz, I can feel the family atmosphere. It is comfortable here for children, teenagers, and adults. There’s something for everyone.” She notes that she and her husband are graduates of the business school, and so both are happy to have events that allow them to feel themselves a part of UCU and support the university after graduation. 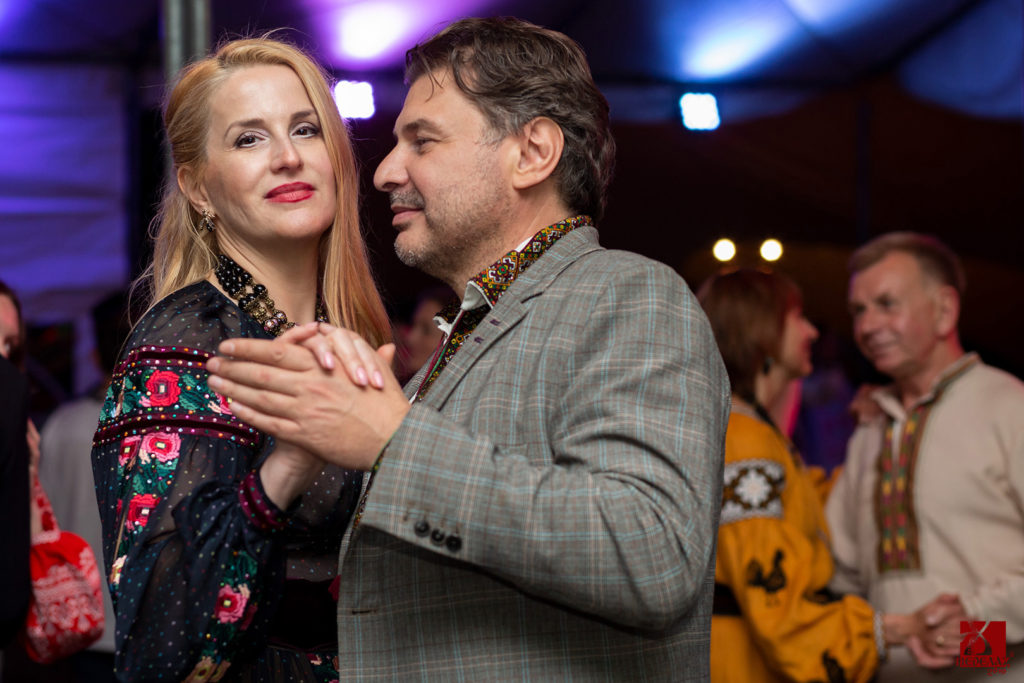