BACK
Article by: Mark Temnycky

Ukraine endured a series of hardships after the Revolution of Dignity in 2013. Thousands have died from the Russian military incursion into eastern Ukraine, and millions are displaced. The coronavirus pandemic has also heavily impacted this Eastern European state. Over 50,000 Ukrainians have died from the disease, and Ukraine’s GDP has significantly declined.

Most recently, Ukraine was stunned by its Western allies when the United States and Germany announced that they had resolved their differences on Nord Stream 2.

Amidst these challenges, however, lies an under-reported success story. Despite the hardships endured by the Ukrainian people, a university in Lviv has slowly revolutionized higher education in Ukraine. This is none other than the Ukrainian Catholic University (UCU).

Founded by Metropolitan Andrey Sheptytsky in 1928, UCU initially began as the Lviv Theological Academy. Several theologians studied at this school, but by the end of the Second World War, the academy was closed by the Soviets. Many members of the clergy were exiled, and several died in Soviet prisons. Religion was outlawed during the Soviet period, and citizens could not practice their faith in public spaces. Those who disobeyed the law were persecuted.

Major Archbishop Cardinal Slipyj’s vision slowly became a reality when the Soviet Union collapsed in 1991. Shortly after this event, a building was purchased and renovated in Lviv, and the Lviv Theological Academy was reestablished in 1994. Additional land was acquired to build a university campus. (This was the same plot of land that was supposed to be used to create a theater for the Soviet military division.)

After a long series of planning, financing, and constructing, UCU was then finally built. On June 29, 2002, UCU held its inaugural ceremony in Lviv, Ukraine.

UCU became the first Catholic university in the former Soviet Union. To this day, it is the only university to hold this status.

The university is also entirely funded by donations, which come through the Ukrainian Catholic Education Foundation.

The initial goal was to make the Ukrainian Catholic University a “center for cultural thought” and transform Ukrainian society through human dignity. Families expend great resources for university education in all cultures and countries. Young students also work hard to be accepted to these institutions. A contemporary university, however, is more than something that is just an educational or research institution. It is a multifaceted corporation for the production of scientific knowledge and professional expertise. It serves as a competent and reputable reference point for state authorities, municipalities, businesses, churches, and non-governmental organizations (NGOs) to search for solutions to the complex problems in the contemporary world.

Based on these principles, UCU grew in quick succession as a prominent institution in Ukraine. By the early 2010s, this university was flourishing. UCU opened a series of new buildings, and it created additional academic programs. Shortly after, it was nicknamed the “Harvard of Ukraine.”

For example, UCU has a prominent Computer Science program. The knowledge and expertise of these students have allowed them to participate in Ukraine’s growing and booming information technology sector. Several of these students have moved abroad to various countries, becoming successful engineers and technicians.

What has contributed to UCU’s success? 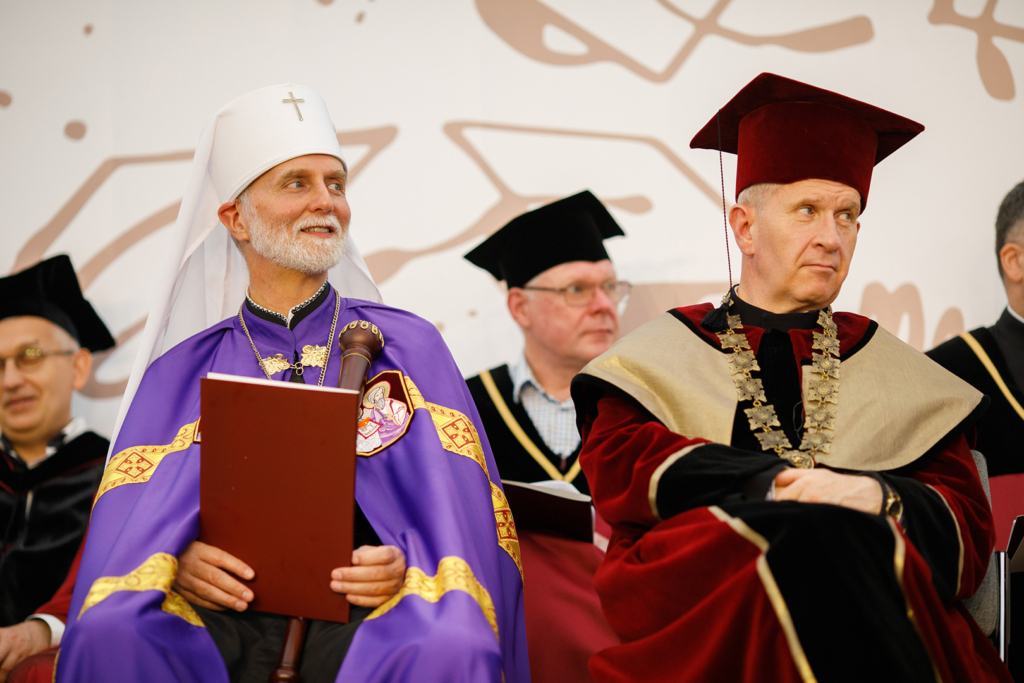 First, UCU has esteemed faculty and staff. The university has spent a lot of time recruiting some of the best professors from around the world. UCU also invites these lecturers to Ukraine, which allows them to interact with their students on a more personal level. They also get to explore the streets of Ukraine.

Second, UCU has some of Ukraine’s best and brightest minds. UCU students study disciplines ranging from theology to computer science. By being a Catholic university, UCU is naturally called to offer an integral formation of the human person, regardless of the program or academic profile. UCU is widely recognized as a leader in the holistic education of young people in Ukraine. During these turbulent times in Ukraine, UCU feels a need for people with strong values and ethics who are capable of public leadership. This is what Ukrainian society expects from UCU, and the university is seen in Ukraine as a trusted authority.

Third, UCU’s goal is present in its curriculum. The core curriculum is a set of educational requirements that apply to all students, regardless of their major. Students learn how to empathize with those in need. They are taught that they have a responsibility to change the world and make it a better place. The core curriculum is a value-based program that equips young people with an interdisciplinary approach to life and holistic education.

Fourth, UCU presents Ukrainians with an affordable education. Many scholarships are available for the students, and the annual cost of tuition is about $3,300 per student. This is much lower than the average expenditures in other European countries. For example, students may pay over $9,000 in Poland or $17,000 in Germany.

Fifth, UCU hosts an annual language summer school that allows students to learn English from native-language English speakers. UCU students voluntarily enrol in these language courses as they understand the benefits of becoming multilingual. Their willingness to learn English makes them more competitive in the job market. It also allows students to participate in some significant initiatives. For example, UCU students have competed in prestigious events such as the “International Mathematics Competition” at London King’s College, the “Singapore Innovation Competition,” and Microsoft’s “The Next AI Guardian.”

Finally, the university places a large emphasis on giving back to the community. The university offers its students a variety of opportunities outside of the traditional classroom and work environment. This institution is the only university in Ukraine that intentionally aims at the holistic development of its students. UCU has developed distinct elements for promoting integral human development (IHD). The university would like to create a comprehensive program for IHD, which could serve as a model for secular and Catholic universities.

Meanwhile, former U.S. Ambassador to Ukraine William B. Taylor has praised UCU’s faculty and staff as they continue to “advocate for human rights, freedom of speech, and accountable governance in Ukraine.” Liliya Hrynevych, the former Ukrainian Minister of Education and Science, has stated that “UCU is a leading institution in the non-government area” in Ukraine.

Journalists and policy experts from the United States and the United Kingdom have also praised UCU for its mission and how it has helped its students develop a “deep commitment to rebuilding, re-making, and reforming” Ukraine.

Overall, UCU’s success has allowed it to become one of the leaders in higher education in Ukraine. The university has an esteemed faculty and staff, and it has enrolled some of the brightest minds in Ukraine. UCU’s curriculum and theological studies mold students into fully rounded individuals. Not only do they receive a quality education, but they are also turning into good and moral human beings. By bestowing these holistic teachings and helping these students become well-rounded individuals, UCU is slowly molding the next generation of leaders.

Through UCU, the future looks bright for Ukraine.