On the morning of 7 May, in a Paris hospital, “quietly, among those closest to him,” as the French newspapers wrote, at the age of 90, Jean Vanier, founder of the L’Arche and Faith and Light movements, passed away. The ideas of Jean Vanier and his encounter with the developmentally disabled became central to the Ukrainian Catholic University. 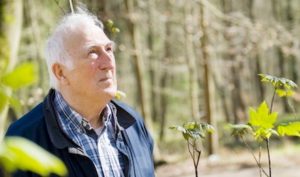 We offer you a text which Archbishop Borys Gudziak posted on social media, to honor the memory of this extraordinary figure.

“I don’t believe in ratings and competitions, but if they asked me, I would name Jean Vanier one of the holiest people I had the good fortune of knowing. He and Mother Teresa were true prophets of the 20th century.

“In order to present to the Ukrainian public this extraordinary, saintly man, allow me to share the letter of support that I wrote to the Nobel Prize Committee, nominating Jean Vanier for the Peace Prize in 2011. The text was not written as an obituary but as a testimony to a living, active person. It was written before the Maidan and the war, before we changed, but it speaks about the dignity which Jean Vanier helped us foster, which we discovered and became conscious of in events that entered history as the Revolution of Dignity. He did not receive the Nobel Peace Prize, but his ideas settled deeply in the hearts of thousands. And, for him, that was the most important.”

Numerous and eloquent testimonies describe how Jean Vanier has brought reconciliation and peace to the life of some of the most ostracized people of the world. Vanier has bridged some of the deepest gulfs in humanity. His life with people with special needs has had a broad global and concrete local impact. In writing to the honored Nobel committee to recommend him for a Peace Prize allow me to speak personally and to concentrate on a very particular perspective, the quiet, yet profound present and prospective influence of Jean Vanier’s peacemaking in Ukraine, a land of little peace in the recent past.

I write not only as an institutional leader and social analyst but also as a simple human being moved and inspired by Vanier. My personal acquaintance with Jean Vanier, his message and work span most of my adult life. The first encounters were in the United States, France, and Canada. I first heard him in 1985 at Harvard University when I was a doctoral student there. Struck by Vanier’s unique serenity and by the integrity of his message, I went to visit the original l’Arche community in Trosly, France for a weeklong stay and got to know Jean personally. From that time he has struck me with a rare capacity to go to the heart of the human experience, notionally and practically. I believe that he is one of the most prophetic personalities alive today.

The insights of Jean Vanier and his encounter with the mentally disabled became central to a novel university project. From the initial planning of the Ukrainian Catholic University in 1992-1994 Jean personally and with such associates as Henry Nouwen and numerous international l’Arche representatives shared with Ukraine the special vision of human dignity that Jean has developed. This project sought to radically rethink what the “university” can be in the twenty-first century. The post-colonial and post-totalitarian trauma draping Ukrainian society provided both a unique challenge and a singular opportunity. While mindful of the needs to offer top-level training, inculcate competences, and prepare the young people for productive life in a complex society which was looking for its place in increasingly globalized world we were in a special way inspired by the witness and message of Jean Vanier to foster the dignity of every human being, a sense of dignity that in Ukraine was and still is in danger.

Ukraine had endured an unspeakable century. Approximately 17 million Ukrainians were killed or died an unnatural death through World Wars, the genocidal Holodomor-famine and in a relentless succession of purges and exterminations. The city in which we are located, Lviv, had 300,000 inhabitants in 1939. Only 60,000 were left by the end of World War II. Hitler executed some 100,000 Lviv Jews. Stalin deported approximately 100,000 Poles in a project of ethnic cleansing. The Ukrainian population was decimated during the war. In the late 1940s some 500,000 men, women and children (10% of the population of western Ukraine were deported to Siberia. Because of widespread and deeply rooted opposition, the methods of imposing Soviet rule in western Ukraine were particularly harsh. Lviv had the highest percentage of NKVD/KGB agents and informants of all the cities in the Soviet Union. In these bloodlands, fear and suspicion became natural reflexes of self-preservation. The city of Lviv and post-Soviet society, in general, remain profoundly traumatized by a past still vivid in the memories of most citizens.

In the early 1990s, it became clear that the deep conscious and subconscious fear and systematic erosion of post-Sovietinterpersonal and institutional trust needed to be addressed and healed at the core. The fear of relationships and the skepticism regarding systems (because the system systematically killed, imprisoned and discriminated), the sense of inferiority and deprived dignity called for a new educational and developmental approach to help future generations overcome the horrific legacy of physical, social, emotional, and spiritual violence.

Today the Ukrainian Catholic University is building perhaps the first college-dormitory in which mentally disabled people will live on a regular and permanent basis with students and faculty. The presence of an l’Arche community in the residence is not meant to be a social service to the needy. It is an invitation to the disabled, who wear no masks and do not put up facades, to serve as professors of human relations. The people of the l’Arche and Faith and Light world transform others who live in fear and remain incapable of true trust. The central presence of Jean Vanier’s vision in the university helps young people open up and trust one another as they grow intellectually and socially throughout their years of study. His vision is not decorative or peripheral to the university, it is at its very heart.

The special gift of the mentally disabled to enter into a relationship without masks or facades speaks very powerfully to people and populations whom life has taught to hide behind emotional faceplates and psychological ramparts. In less than 20 years Jean Vanier’s work is beginning to have a profound impact on academic, social, ecclesial, and even political life. Member of the Lviv l’Arche community, those with and without mental disabilities, have become well know citizens of Lviv, encountering and personally influencing such societal leaders as the mayor of Lviv, Cardinal Lubomyr Husar, and representatives of the business community. Countless young people are developing a new deep and broad experience of human dignity as they shed the fear and distrust that history has bequeathed to them. What disarming joy there is in this process!

Through his visits and work in Ukraine and books published in Ukrainian, Jean Vanier has moved his listeners and readers to radically reconsider the very nature of the human experience and the preconditions and qualities of interpersonal relations. The university experiment briefly described is just one concrete example. His challenge to replace competition with trust and fear with love is not an abstract unreachable hypothesis. Vanier’s vision and personal example are, in fact, being institutionalized. It inspires a new way of thinking and living for many people in post-communist Ukraine. Jean Vanier’s existential exploration, practical insight, and life long commitment to foster peace and authentic harmony in a disturbed world inhabited by variously disturbed people is a shining testimony to the highest ideals of the human race. His witness is prophetic and simple, global and humble, disarming and powerful. The conferral of the Nobel Peace Prize on Jean Vanier would recommend this witness and example to the world’s attention at a time when there is a particular dilemma of interpersonal, societal, and international relations in a global community challenged by diversity, virtuality, and human frailty.

I speak for thousands in Ukraine whose life Jean Vanier has changed and who also support this nomination.