During the Revolution of Dignity, the UCU community practically from the first days joined in the events on Kyiv’s Independence Square. Eventually on that square, our professor Bohdan Solchanyk, a hero of the Heavenly Hundred, was killed by a sniper’s bullet. Then the struggle for one’s dignity became somehow very personal for our university. So it’s no surprise that, from the start of the war in eastern Ukraine, UCU has not stood on the sidelines. Year to year it organizes the transfer of humanitarian aid for the needs of the army. UCU also offers training, scholarships for the education of soldiers, legal support of veterans, and also research that might be of use for military needs. 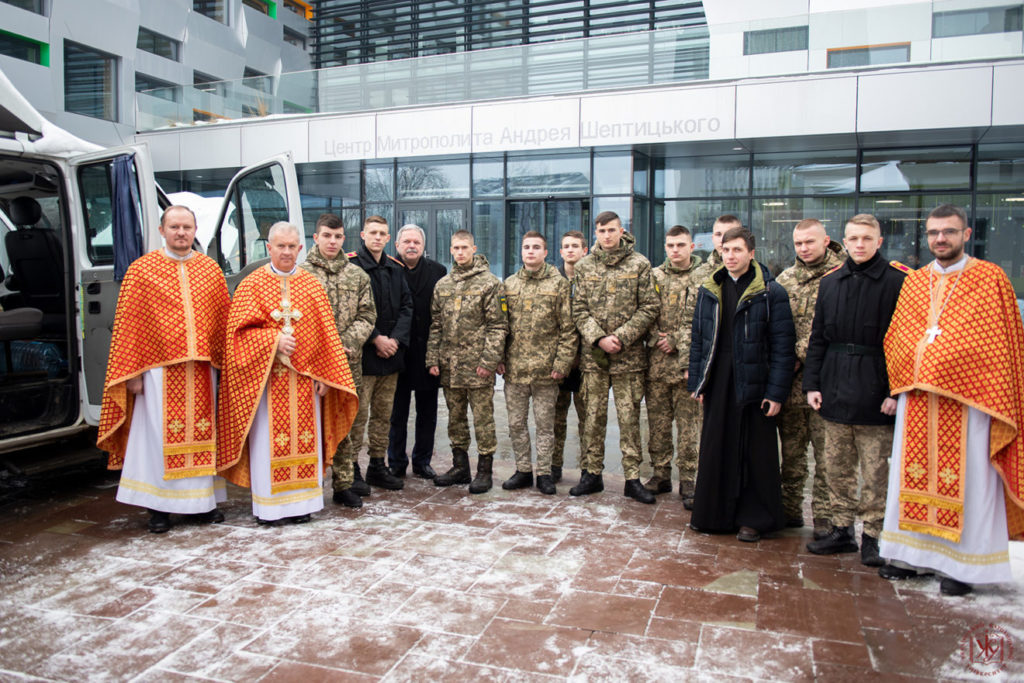 UCU’s Volunteer Brigade has operated for a number of years now. It unites teachers, staff, and students of UCU who as volunteers dedicate themselves to social ministry for Church and society. The Volunteer Brigade plans various activities aiming at providing what help they can to persons and civil and government institutions in need, and especially to the needy in the war zone, to structures and persons who are involved in defending the territorial integrity of Ukraine or who have suffered in the conflict zone.

Among the main areas of activity of UCU’s Volunteer Brigade: medical and material-technical support of military hospitals in Ukraine, especially in the conflict zone; collecting funds and organizing the treatment of wounded soldiers in Ukraine and beyond its borders; providing temporary refugees, volunteers, soldiers, and members of their families with clothing, shoes, and needed daily items; preparing mobile structures for washing and bathing for military divisions in zones of armed conflict, and pastoral ministry in military hospitals, visiting and providing personal and psychological help to wounded soldiers and members of their families. 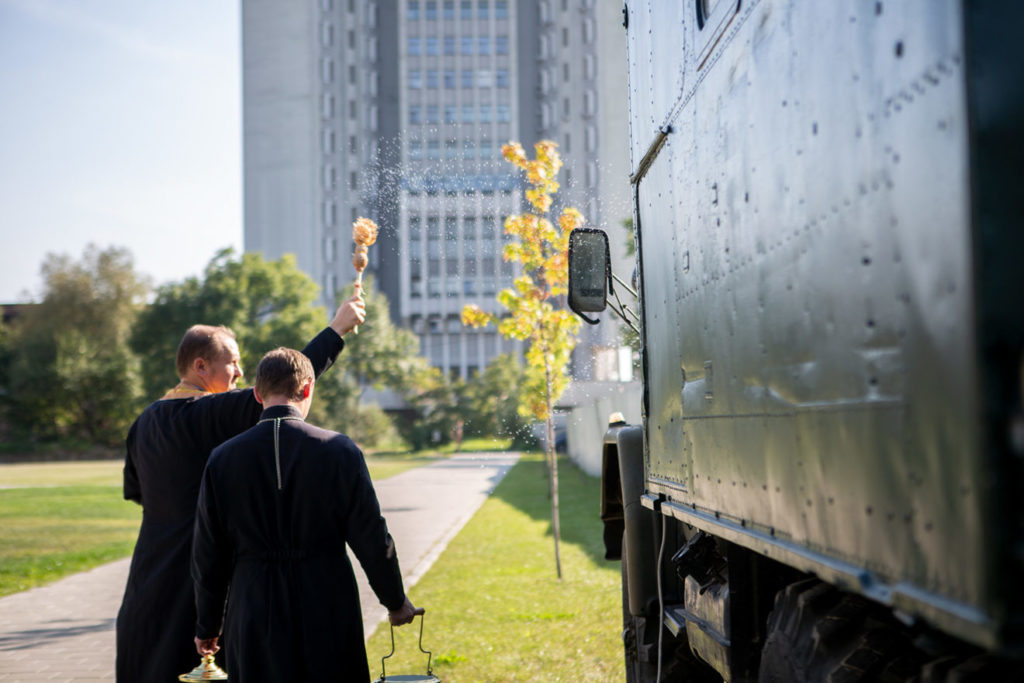 Fr. Petro Terletskyi, head of the Volunteer Brigade, recounted what they have done since 2019: “In March 2019, at the start of the military rotation, we bought, with daily earnings and donations of staff and friends of UCU, a Renault Mascott II. We sent it to the frontline. The soldiers sent a video in gratitude for this cargo bus and two washing-bathing modules. And in October 2019, we sent 25 boxes of medicine, medical supplies, clothing, shoes, and toys for Caritas-Zaporizhzhia, which ministers at military bases in the districts of Mariinka, Krasnohorivka, and Avdiivka. We also gave an old icon screen, donated by a guard at [UCU’s building] on Sventsitksoho Street 17, Yaroslav Kubai, the son of an underground Greek-Catholic priest. The icon screen was used for prayer in his village, Malyni. It was then taken apart and donated for the needs of the faithful in the east. Also in 2019, funds were collected and medicine was sent quarterly to 66 military field hospitals in the city of Pokrovsk. The last time was in September.” 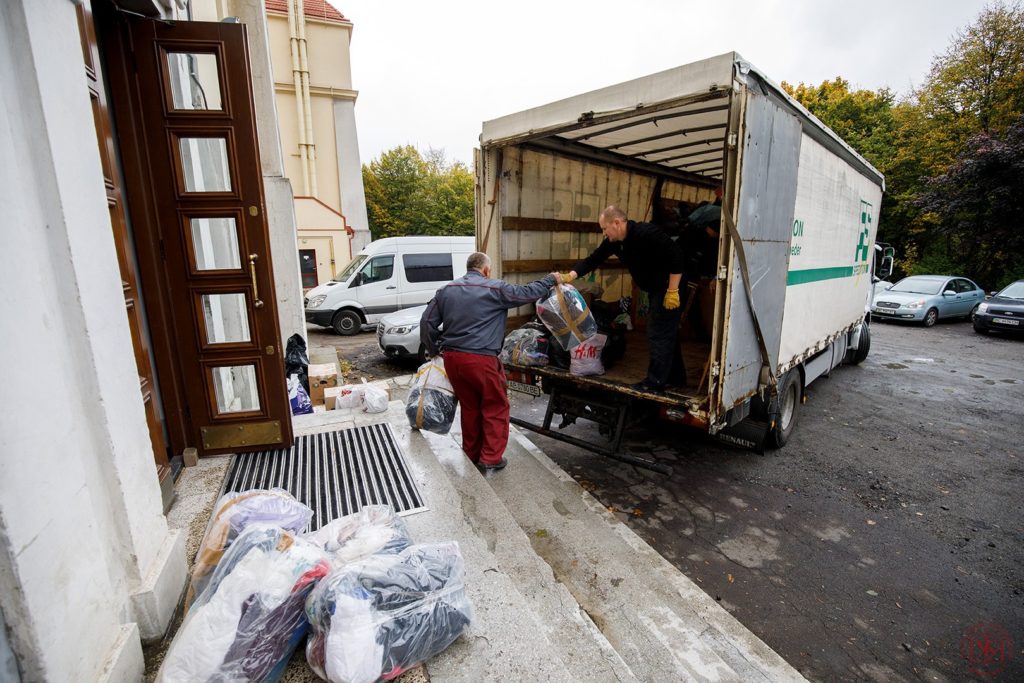 Twenty boxes of medicine, medical supplies and instruments, clothing, and shoes for the needs of displaced persons in the Donetsk Region and for medical institutions were sent east.

In February 2018, the UCU Law School opened a legal clinic which, directed by Khrystyna Kovtsun, among other things helps those who have suffered because of the war in the east. Students of the Master’s Program of the UCU Law School provide consultation under the direction of the manager and practicing lawyers. Staff and students provide free legal assistance to socially vulnerable members of the population and those who have suffered from the Russian-Ukrainian war. 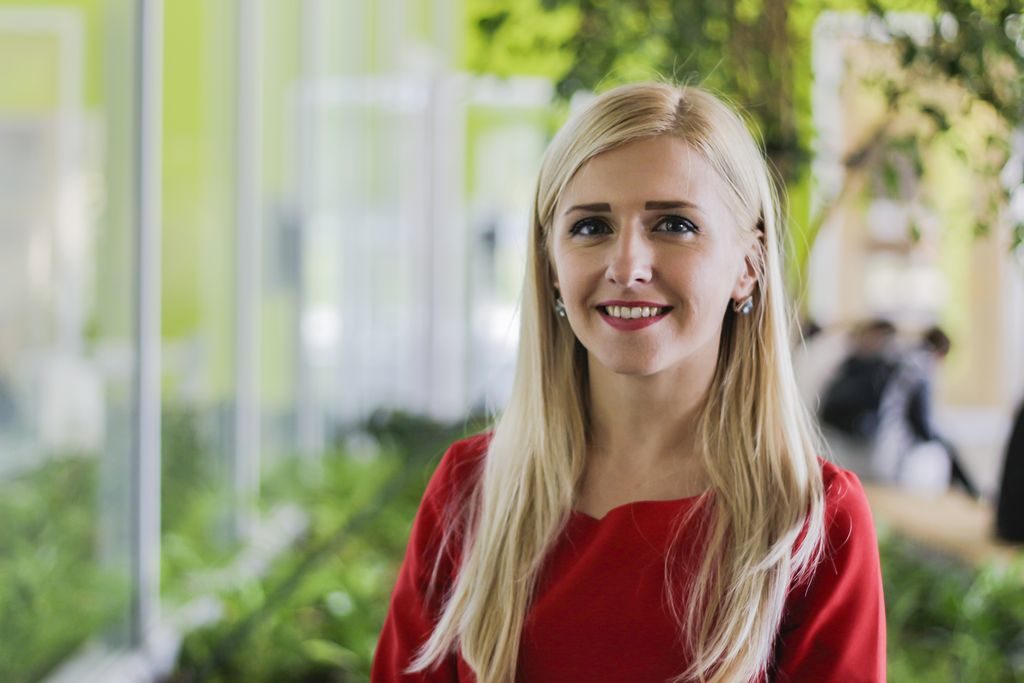 “In fact, the idea of a legal clinic is not new. There are such structures all over the world. There is a ‘legal clinic’ movement. Educational institutions which have faculties of law have structures like this. Sometimes they call them laboratories, sometimes clinics, various names. This is a place where students can acquire practical skills. The idea of such structures is also to help people from the socially vulnerable part of the population. People who can’t afford to pay for legal assistance come to such institutions and, in turn, students under the direction of practicing lawyers provide legal aid,” explained Khrystyna Kovtsun.

“So, in fact, our legal clinic fulfills two functions: educational – our students learn how to use in practice the knowledge they’ve acquired; the second is social – helping people through providing legal consultation. We help participants in the ‘Russian-Ukrainian war,’ as I would call it, and not participants of the ATO [Anti-Terrorist Operation]. Generally, our clients in the last two months were those who suffered as a result of this war and the mothers of the slain. They also come to us with other questions. These could be called family questions. We started working with the Lviv Education Foundation, which is involved with orphans and children in institutions. They ask us for legal help, for example, in matters of welfare payments or single mothers or, let’s say, large families.”

Sharing experience in the field of military chaplaincy

No less important in the conditions of war in eastern Ukraine is the work of the clergy, in particular chaplains who work with soldiers. Last spring semester, in May-June 2019, there was a program to share experience and a series of training sessions for Ukrainian military chaplains organized by the UCU Faculty of Theology and Philosophy, the Tilburg School of Catholic Theology, the Ministry of Defense of the Netherlands, Ministry of Defense of Ukraine, and various organizations and departments of military chaplaincy of both countries of various denominations. 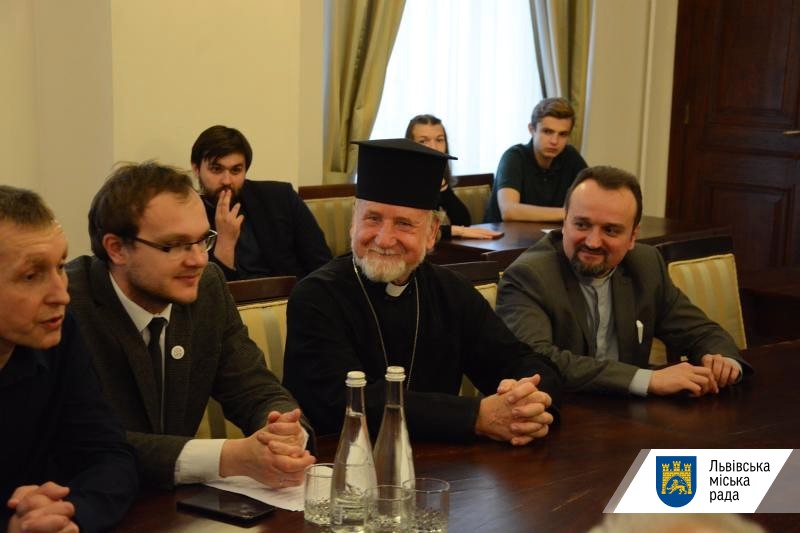 During the meeting. Fr. Deacon Roman Zaviyskyy noted that Ukraine has much in common with The Netherlands in the religious landscape, as compared with neighboring countries Poland and Russia, because Ukraine, like the Netherlands, historically is multidenominational and multicultural. So the countries can learn many things from one another in this field, “since the delegation consists of representatives of the Ministry of Defense of the Netherlands, educators who work in universities where there are programs to prepare and certify chaplains, and also, most importantly, current chaplains who represent various denominations.”

The program is intended for officers, captains, and commanders of other subdivisions of a brigade with similar assignments. The goal is to provide the participants with effective instruments for managing those directly subordinate to them. At the basis of the program is research on the Ukrainian military conducted by the UCU Leadership Center together with the Lviv Business School. Upon completion of the program, Ukrainian military personnel will master techniques of setting goals and planning assignments. They will acquire skills for planning their activities and those of their subordinates, and learn how to monitor execution of delegated tasks and provide feedback and become acquainted with a model for developing the character of a leader.

Also, the UCU Leadership Center, together with the Ian O. Ihnatowycz Institute for Leadership (Richard Ivey Business School, University of Western Ontario, Canada) in 2018 and 2019 conducted research on military leadership in Ukraine, which was presented at the Lviv Security Forum.

“This research was composed of two stages and was directed at comparing military and civil leadership, detecting factors which influence the development of a leader’s character in the military, and analyzing the question of the personal welfare of military personnel. As part of the

Lviv Security Forum, the center presented previous results of research on military leadership in Ukraine. The main thesis was: leadership is required at all levels of the military, on tactical, operational, and strategic levels; Ukraine needs an army which fosters trust; each politician is obliged to study deeply how to build an army on which the defense of the country is based and to be guided by this knowledge; if we consider an understanding of leadership in the military, this will lead to a deep re-thinking of war in the army in general,” explained the director of the UCU LvBS, Yaryna Boychuk. 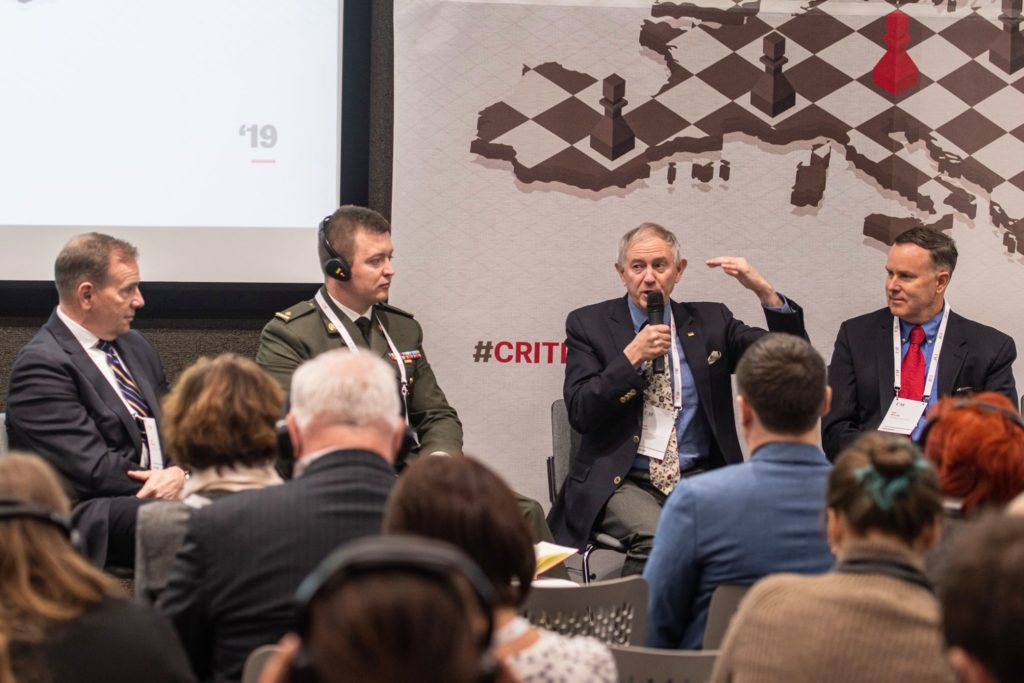 During the discussion of military leadership in Ukraine (Lviv Security Forum)

There are various ways to help our military on the frontline, not only by collecting humanitarian aid but by developing research projects which in perspective can be used for military practices. Thus a group of students from the IT and Business Analytics Program of the UCU Faculty of Applied Sciences, headed by teacher Oleh Fareniuk, is developing a device which can help more quickly and accurately call medical assistance for wounded soldiers. Soldier-friends inspired the students with this idea, as they talked about what they needed. 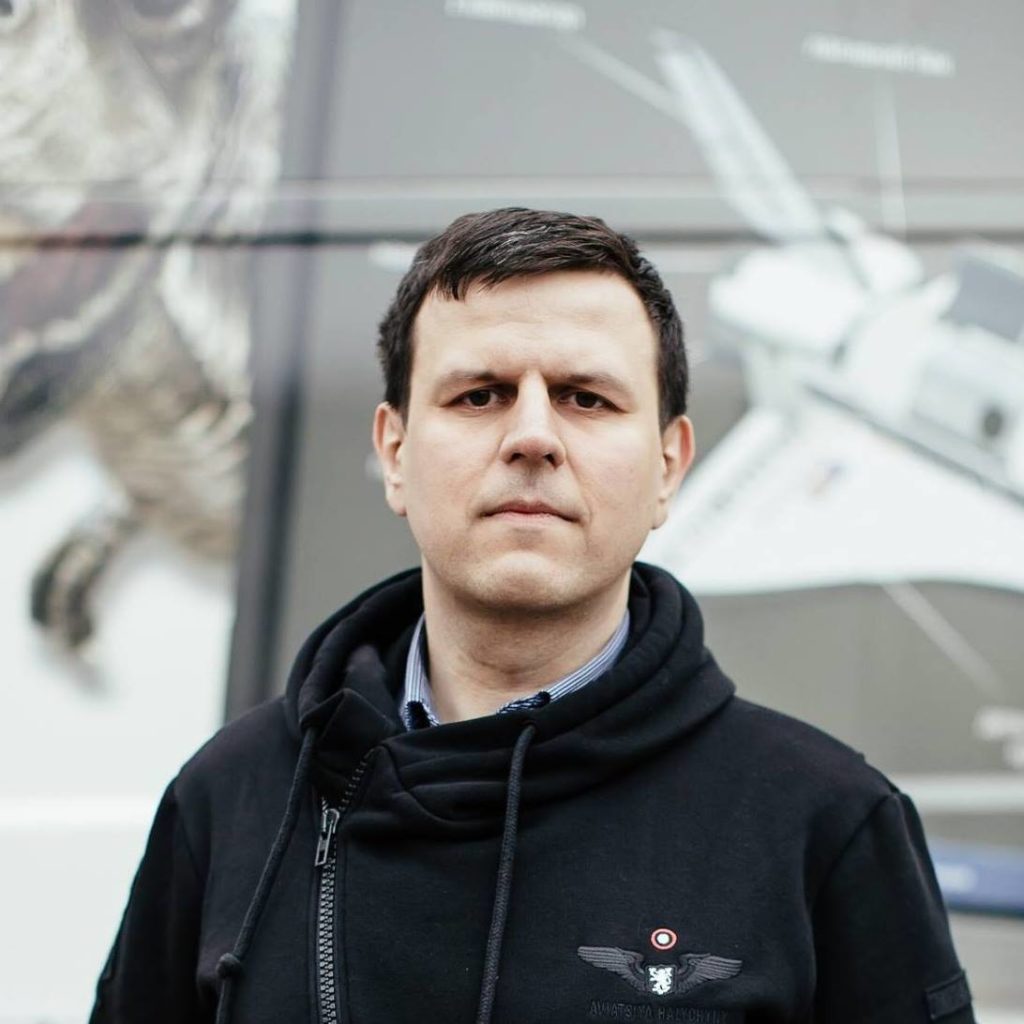 Oleh Fareniuk, a teacher in the Faculty of Applied Sciences

“When they call medical assistance for our wounded, the opponents regularly intercept signals and the medical brigade is ambushed, for if even one transmitter falls into the hands of an enemy, he can pretend to be one of ours through the whole day,” explained Oleh Fareniuk, a lecturer at the Faculty of Applied Sciences. “So, to solve this problem, it’s necessary to develop a base station protected from such deceit at the medical support center where the commander of the medical subdivision is located, to monitor signals from the wounded. Later, in order to inform about the need for medical help, the soldier should press a button on the device, which our students are developing. Thanks to the use of cryptography, the device can dependably and unambiguously provide identification – a stolen one will not compromise the others. Since complicated actions can’t be expected from someone seriously wounded, this device needs to be as simple as possible – one button, with the help of which information will be transferred about the person’s location and identification of the device, inasmuch as all the devices have their own unique code. Two alternative channels of communication are planned. It can provide additional information like pulse, blood pressure, temperature. Another variant for improvement could be developing identification by fingerprints, which will help determine the name of the wounded soldier who needs medical help. Obviously, this project is far from finished, but it is important that they are trying to be helpful in such important questions like helping our soldiers. I also want to add that two staff of the well-known company Cypress, who have much experience in this area, are helping us develop this device.”

Student projects in the east

The UCU Student Association and UCU’s United Ukraine student organization for a number of years now have assembled youth to celebrate Easter and Christmas together in eastern Ukraine. Regarding the latter, the central element of the celebration is a vertep (Christmas play). The students perform both for local residents and also for the military.

“When the war began in eastern Ukraine, we decided to travel there and perform for our soldiers. We contacted the Ministry of Defense, to allow us to perform near the frontline. Fortunately, they allowed us. Finding sponsors who every year help fund us, since 2015 we have performed in towns along the frontline,” explained Yuriy Muryn, head of the project for United Ukraine.

“This year, our community of volunteers from United Ukraine UCU caroled with the Vertep in the East project all along the front line, from Stanychno-Luhanska to Mariupol. These were the specific locations: Stanychno-Luhanska, Harasymivka, Petropavlivka, Shchastya, Novoaidar, Bakhmut, Pervomaiske, Karlivka, Mariinka, Krasnohorivka, Vozdzyzhennya, Tarasivka, Taramchuk, Toretsk, Volnovakha, Manhush, Yuriivka, Mariupol, and Pavlopil. They performed for our civilian friends (in Harasymivka, Petropavlivka, Novoaidar, Toretsk…) and also for soldiers in all the other areas listed. They were at Brigade 72, the 1st Tank Brigade, 28, 128, DUK, Aratta, Morpikhy… Our trip was exceptionally merry and friendly, regardless of very cold weather: the soldiers sincerely thanked us for our support. Some of them cried. Civilians also warmly greeted us and some of them have already become our good friends.

“Every year more and more people come to watch the vertep: they smile, they cry, they thank us, and often they sing along with the carols. Even at the control point in Stanychno-Luhanska, where people stand in long lines to pass into Luhansk and back, they heard us with joy. They also caroled, took photos, and thanked us for coming. All these people live in occupied territory but they love Ukraine very much,” summed up Muryn. 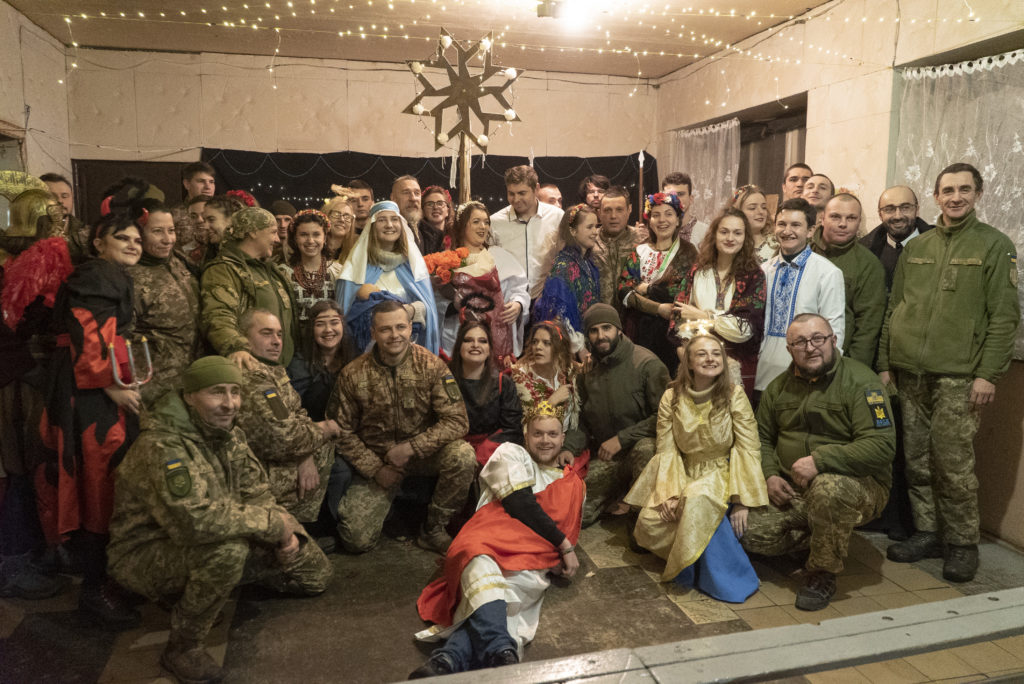 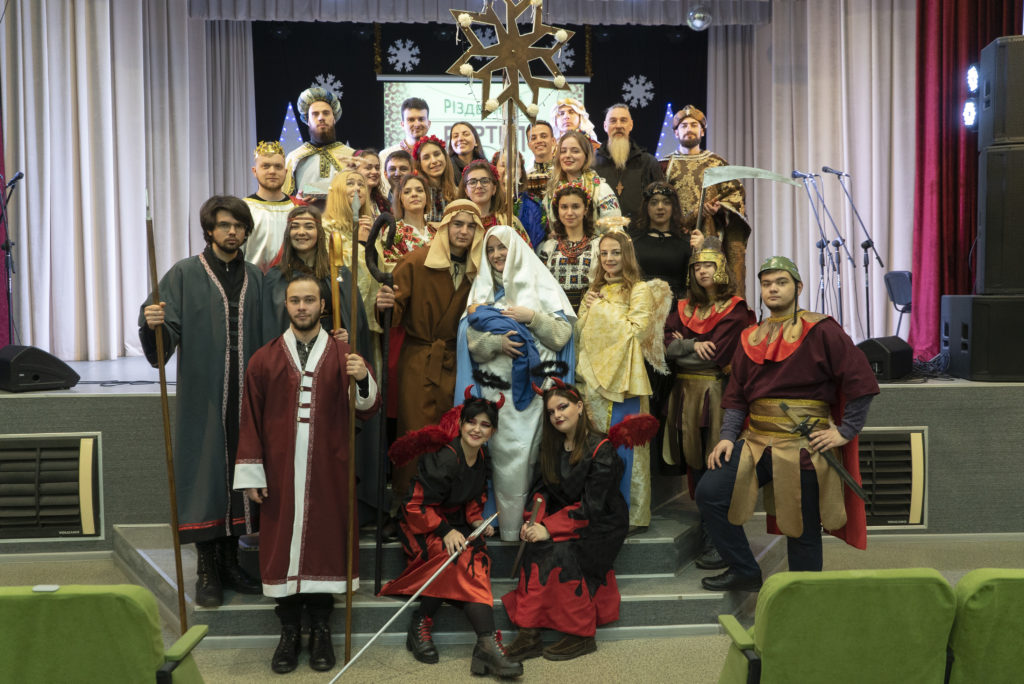