When peering down the tunnel of the future, light is critically important. Without it, being lost is likely and sustaining injury, guaranteed. Ukrainian Catholic University (UCU) professor and public intellectual Yaroslav Hrytsak sought to shed some light on Ukraine’s situation presently and position going forward. He argued that what is modern remains the pivotal question facing Ukraine in the present era. His presentation, which was titled “Why We West?: Christian Origins of Modernity” and delivered at the recently opened UCU Metropolitan Sheptytskyy Centre in Lviv. 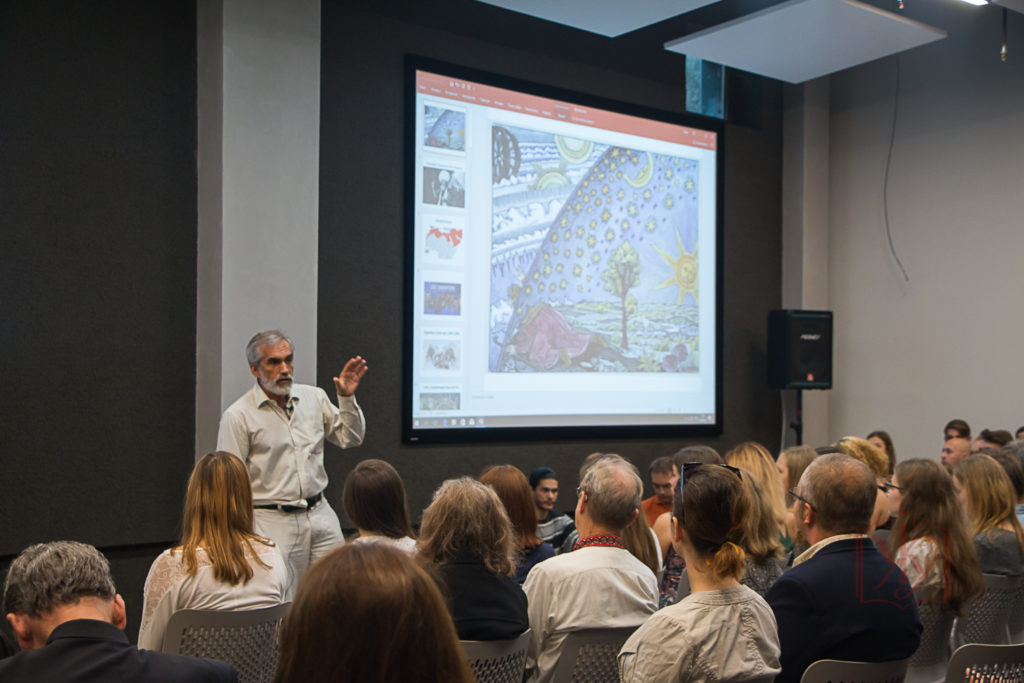 His sketch began with the Islamic “translation encounter” with Ancient Greek texts. Between the ninth and eleventh centuries, a debate raged as to whether something like Aristotle’s philosophy could be synthesized with Islamic faith. This began the oft-cited conversation between faith and reason. Initially, because of a mystical appearance to an early caliph, it was believed that Islam and Aristotelianism were doubtless complementary, causing translations of and scholarship about Ancient Greek philosophy to flourish throughout the Abbasid Empire. Some scholars –Averroes, for instance–believed in, so to speak, two books of revelation: one of the canonical scriptures and the other of nature itself. Later, however, a possible synthesis between faith and reason was rejected by the Islamic world.

Thankfully for the Western world, this prohibition on Greek philosophy did not reach the Empire’s farthest corners. In predominantly Christian Spain, translating Aristotle continued, and the texts made their way to the newfound Christian universities. Exposited by such powerhouse intellects as St. Thomas Aquinas–himself having been influenced by Averroes’s thought–Aristotle made his way into the Western canon. The conversation between faith and reason remained alive and well thanks to Christianity. So believing was the West in the axiom that to know nature is, in turn, to come to know God that modern sciences were achieved. Isaac Newton and Adam Smith, the founders of modern calculus and economics, respectively, were able to make their discoveries precisely because the conversation was so vibrant and that reason was so prized.

Hrytsak then pivoted to answer potential objections to his thesis that the West was the sole environment in which modern fruits could grow. He admitted that the East had its fair share of advancements, but these were nothing compared to the scale and systemization of the West. Using China as a foil, Hrytsak stated that Eastern scientific discoveries like gunpowder occurred more often accidentally than purposefully. With respect to exploration, for example, China remained content to hug coastlines for security. The promises of reason bolstered by faith, conversely, emboldened explorers to traverse rough, open season. Only in the West was there careful observation of nature, which then spurred the Scientific Revolution. And only was it the West’s Christopher Columbus, with the help of “eyeglasses, telescopes, and astronomy,” who traversed the open sea to make landmark discoveries. 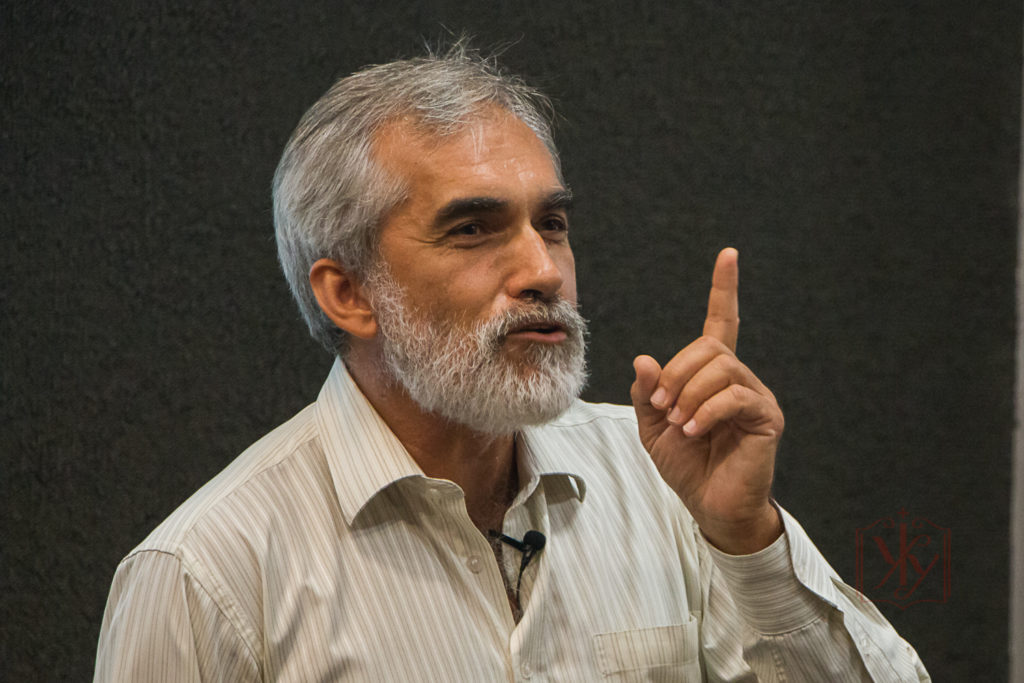 Darkness soon descended upon the West, and it came by way of the Enlightenment’s prejudice against religion. Alluding to Voltaire, Hrytsak defined the prejudice as thinking religion to be for the weak and secular but rationality for the sophisticated. And to that point, Hrytsak rightly celebrated the immense achievements that such a worldview rendered. Skyrocketing life expectancies and newfangled conveniences are a good. But without a moral, even religious, element to Modernity, atrocities occur. Hrytsak argued it is only under such modern conditions that the Holocaust could transpire.

The wonder then becomes this: where does Ukraine fall amidst all of this? According to Hrytsak, the answer is with the Vikings who shifted their trade routes to Constantinople, causing them to pass through Kiev and Russ. Missionary Sts. Cyril and Methodius made their way to this state and helped establish a language, which thereby solidified the Church’s position in culture.  Kiev and Russ, now Ukraine, developed in much the same way as the West. The first existing historical records of this area, found in 1492 of pure coincidence to the discovery of America, unsurprisingly come from monasteries which preserved ancient texts and their translations. It appears that the Church induced in Kiev and Russ a similar “translational moment” to the earlier Abbasids. And it was eventually under the Russian Empire that Ukraine made is unique way in the Modern era.

At a hinge moment in the lecture, Hrytsak made a crucial point: “Ukraine was baptized by wars and revolutions, and we are proud of this history, but there’s another side to this history. Ukraine has deep wounds and birthmarks of violence.” This means that although Ukraine did modernize, it had to go through hellish violence to meet that achievement.  Emphasizing this point the 15 years between 1932-47 Ukraine underwent six genocides, which is indispensable to understanding Ukraine’s identity. Simply put the arc of Ukraine’s history is one “of survival.” But this narrative is too simple for the modern era. Contemporary politics are predicated on more than mere scraping by, and they pine for change and progress. Ultimately Hrytsak delivered a message of future-oriented hope: “the main achievement of Ukrainian independence is the young generation.” This generation, he continued, is one which is at once ready for change and not afraid to act boldly.

Not the least example in his estimation was the Maidan protest. Outside onlookers to Ukraine and friends of Hrytsak proclaimed that “postmodernity has died with Maidan” because those who fought did so for fundamental values.  These revolutionaries knew that there were irreducible, inalienable values that had to be protected. Maidan then is an example against passivity and complacency, which reveals some beginnings of a pathway forward.

Numbers, too, can help illuminate promising ways forward. Hrytsak stated that it is minorities which make a change, with a concentration of only 20% being enough to do so. Based on forthcoming data he showed that this threshold nearly exists among Ukrainians, but potentially dividing them is a split between belief and disbelief in God. And so Hrytsak maintained a jovial, hopeful message but warned not to focus immediately on divisive issues. Proselytizing would only serve to slow and encumber desired changes. Despite differences and disagreements, a better strategy is to find common ground and pave a way forward.

While it is certainly true that Ukraine has a long way ahead. Professor  Hrytsak is manifestly cognizant of this but left with important lessons. For one, Ukraine and especially its youth must learn from history because this shows the values worth protecting. These motivate, and among them is necessarily that one must desire life well beyond survival and seek to thrive. The beginnings of this come by way of unity over division. Although the path is dimly lit, and there are pitfalls awaiting and mistakes to be made, there remains nonetheless hope.