Before the start of the new academic year with lectures and seminars, countless events happened at UCU, symbolically connected with the festive program of UCU Days. During the festive week, first-year students became intensively acquainted with their alma mater, and students and others interested were able to join in a marathon of lectures and workshops by teachers, invited experts, and friends of the university. 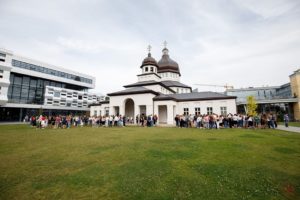 First-years were welcomed into the larger UCU community at an orientation session. During the first day of the orientation session, they settled into the Collegium, had a tour of the campus, and heard about the values and mission of UCU. The next day, acquaintanceship with their alma mater continued. This year the students visited a place where they will spend more than one evening in the coming year, the multifunctional library of the Sheptytsky Center, and they also found out about the administrative structure and divisions that they will encounter as students. In order to invite first-years to active participation in the life of the university and student government and the organizations and initiatives at the university, a student organizations fair was organized. 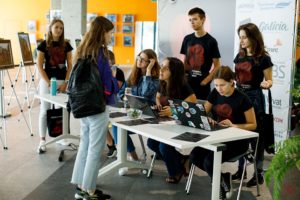 In order to inspire new students and disperse their fears, the acting director of the Center for Leadership of UCU, Lviv Business School (LvBS) Professor Andrew Rozhdestvensky conducted training for them to realize their leadership potential. And after the meeting with the chaplains and staff of UCU, first-years were able to take part in the traditional general university Liturgy presided at by Fr. Rector Bohdan Prach. 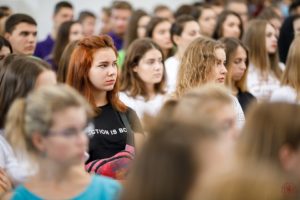 During the orientation session, the ceremonial awarding of approximately 400 scholarships, possible thanks to benefactors of the university in Great Britain and the USA, was also held. But the first-years not only became acquainted with the infrastructure and their new home, but they were inspired by the lecture of Iryna Starovoyt, teacher in the Artes Liberales Bachelor’s Program of the UCU Humanities Faculty, on how to study honestly and conscientiously and be an example to be followed. Referring to academic honesty as one of the founding principles of UCU, the scholar emphasized ways and means which can essentially help first-years combine joy in study with effective use of knowledge and skills acquired. 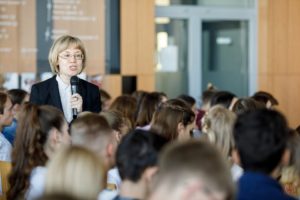 In order to describe the particularities of education in the 21st century, Iryna Starovoyt turned to classifications proposed in the last century by philosopher Isaiah Berlin. Based on an old Greek parable, he noted two approaches to acquiring knowledge, dividing people into porcupines and foxes. 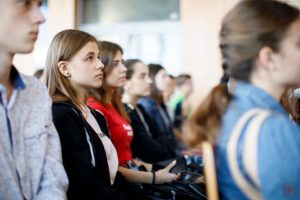 “In a university environment, porcupines are people who are collectors of knowledge, who never hurry anywhere. As a result, they receive great erudition. Student-foxes have precise understanding, sharp focus, and a need to achieve quick and effective results. They ‘hunt’ knowledge. So, the university of the 21st century, and life, demand from us the ability to learn in both ways at the same time,” explained the teacher. In conclusion, she emphasized that, regardless of the chosen approach to study, everything must be learned independently: “Study at a university is not something which can be delegated. No one will study for you without you!” Iryna Starovoyt summed up.

The meeting with Archbishop Borys Gudziak begin with a game in which he asked those present to divide into pairs and tell their interlocutor about their most interesting summer memory. With one condition: the listener must express the greatest indifference to what is said. With this small exercise began the main theme of Archbishop Borys’s speech, listening. 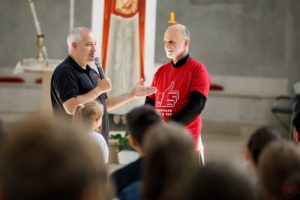 Reflecting on where the authentic comes in our “virtual” times, he underlined the context of our era: constant informational noise, the competition of various exterior stimuli for our attention, the absence of quiet, and, as a result, the absence of a space in which a conversation can be held, with one’s self, another, or God.

“It’s hard to expect that you’ll hear deep things when you’re only on the surface. It’s hard to expect that you will be able to understand the taste of the good and the tart in a barrel of red wine if you always drink only sugared water… Our community is called to wine, to a refined taste, to a filigreed perception. For this, you need to ‘tune’ your hearing, your perception, control your passions, identify noise and extraneous voices, of which there are many! And to hear the voice of God’s blessing,” advised Archbishop Borys. 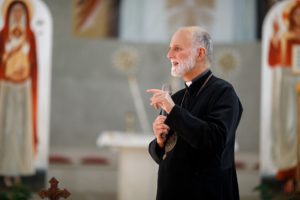 Therefore, according to the archbishop, the most important lesson to learn at the university will be learning how to listen: “Be a virtuoso. Hear tones. Our era has many new challenges. But the disciplines of the spiritual life are as old as the world. And the first of them, the first step in the spiritual life, is a listening attitude. Or we call this perception, or contemplation, or patience, or expectation,” he summed up his speech.

The full Ukrainian-language text of the speech is available HERE 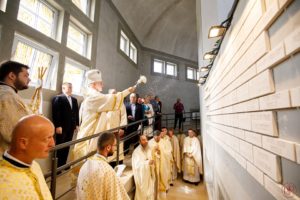 Ceremonies for the community: Placing the capsule in the structure of the new collegium

The first-years continued getting acquainted with the university’s spiritual life with a Liturgy on the church’s feast day, the dedication of donors’ commemorative markers, the ceremonial placing of a memorial capsule in the structure of the new collegium, and the consecration of mosaics in the church’s dome. 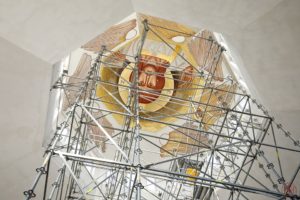 During time spent together in the University Church of the Holy Wisdom of God, each of those present could stop, look at his or her neighbor, and listen closely to the voices of the people close by and gather the strength to listen to God’s voice.

One of the main priorities of the festive week at the start of the academic year is creating an intellectual space open to experts from various fields of knowledge. During the main festival program of UCU Days in Lviv, each faculty of the university offered a number of lectures and workshops. You can watch the lectures of psychologists and teachers of the UCU Faculty of Health Sciences Oleh Romanchuk and Oleksandr Avramchuk HERE 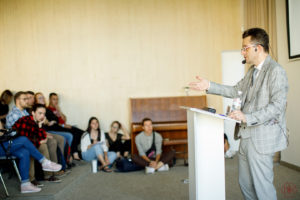 The theme of this year’s TEDxUCU was “The person in a time of changes.” Twelve speakers, including graduates and good friends of UCU, talked about how they feel and reflected on their own experience or through the prism of professional changes that are happening in the world of the 21st century. The speakers offered various perspectives, and the dynamic character of the talks helped not only to formulate more concrete questions but to better see the responses in complex. 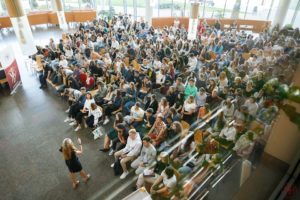 “We never have time. Then life ends. It is very important to ask yourself if the present situation is acceptable to you. Stop doing whatever doesn’t work. It’s not worth it,” Anastasia Zahorodniuk advised her listeners. This year she received the “Woman of Ukraine” award in the “Business Startup” category. Her talk was a response to the question of how or why it’s worthwhile to dare to make cardinal changes in your life. 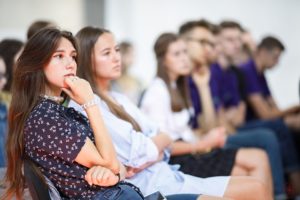 And Fr. Stepan Sus talked about finding yourself in today’s turbulent era from the perspective of Metropolitan Andrey Sheptytsky’s life: “There are conditions which become a real challenge for us, but they also teach us how to handle things and not fear going ahead. It’s at this time that we learn what wisdom is.” More information about TEDхUCU 2019 is available HERE. 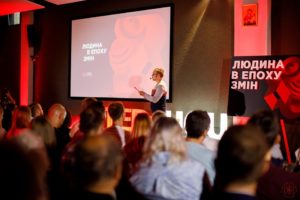 This year the UCU Alumni Association prepared a traditionally cozy but special program for those who have left, and yet the university remains in their hearts. After Liturgy together in the University Church of the Holy Wisdom of God, Vice-Rector Myroslav Marynovych, a good friend of the alumni, spoke to them. 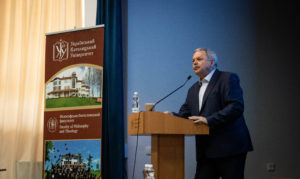 And after the presentation of the projects of the Alumni Association, alumni talks were held. Five UCU alumni who have unique experience in various fields were asked to talk. Successful graduates of UCU Ihor Feshchenko, Sofia Papirniuk, Olha Klinova, Zoriana Melnyk, and Mariana Kashchak shared their professional path and personal challenges.

Ruslan Lapiniak of Ternopil, a 2012 graduate of the UCU History Program, considers that it is impossible to be a former student or staff member of UCU, for if you were here once, then one way or another you return or remain. Today he works in Lviv, but is a Board member of the UCU Alumni Association. He recounted how many alumni support the university in various ways, financially, technically, and informationally, in these ways demonstrating how they belong to the community. 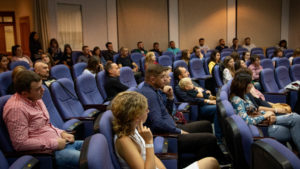 After talking together and reminiscing about their times at the university near a nostalgic photo display, the alumni stepped outside to enjoy a barbecue, play soccer, go kayaking, or dance near the bonfire. 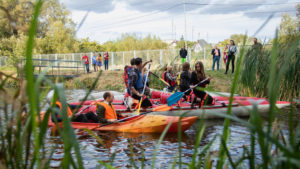 Kseniya Tsvikilevych, one of the meetings’ organizers and director of the Department of Alumni Relations, explained that the event was organized on the example of famous American “homecoming” parties, where people chat and remember their past together in various formats: games in big groups in the fresh air, sharing experiences and the motivational talks of invited speakers. 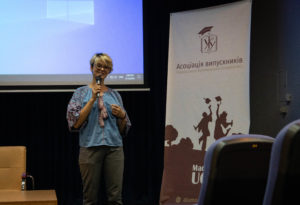 The Christian youth festival Wind of Hope lasted only one day, 15 September, but it managed to assemble 5 thousand people from the whole country. The organizers weren’t surprised at the amount of people at the festival, because they were open to people of various views and denominations. Not in vain was the motto of this year’s festival “A festival that unites.” “This year we want to talk about unity, about interaction, that is, the fact that we are one great community,” explained Iryna Kosar, coordinator of the Christian youth festival Wind of Hope. 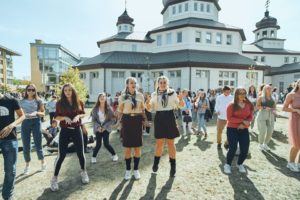 There were a number of lectures by leading Ukrainian experts as part of the festival, and a project called “Stories of the Wind” began; from 13:00 to 17:00, 14 wonderful, creative, successful people shared their complicated paths in life. During the festival, there was also a two-hour intensive about the national Ukrainian project Inclusive Friendly, the goal of which is to teach skills for communicating with people with disabilities. 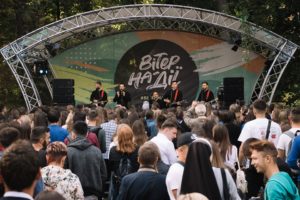 Inclusive Friendly conducts training sessions all over Ukraine, thanks to which the participants acquire practical skills for behaving with people with disabilities, simply being with them and also special etiquette. At the end of the busy day, the organizers had prepared a bonus for all the guests, performances by the group Antytila, DykoBrass, Cana, and others. 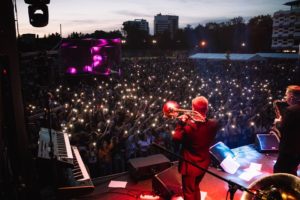