BACK
On 17 February, the newly-created Josyf Slipyj Legacy Society was inaugurated, which will include benefactors of the Ukrainian Catholic University. The main speaker at the event was UCU Vice-Rector Myroslav Marynovych. The full text of his speech is available HERE. 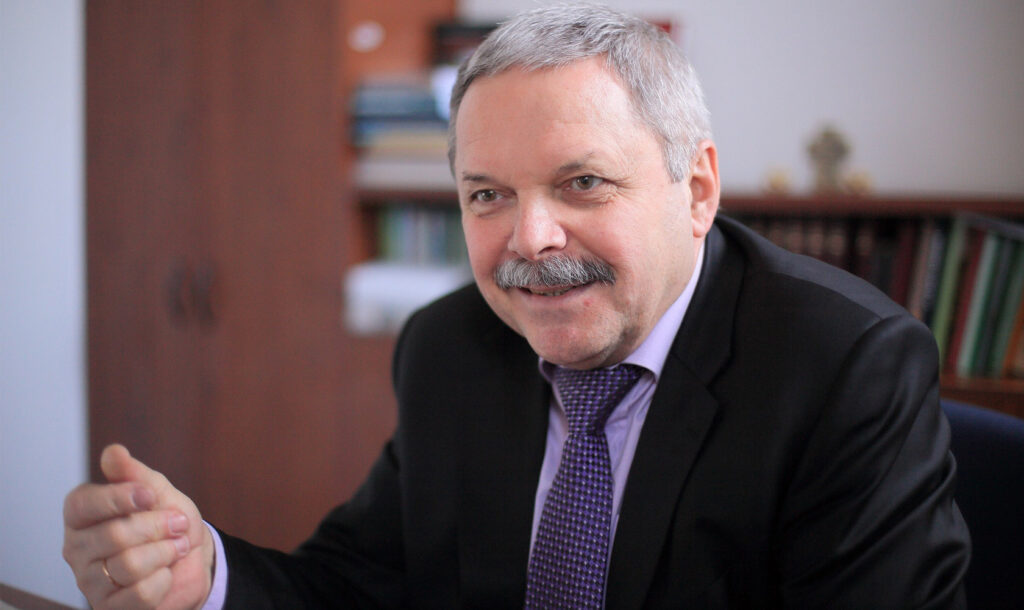 The event was held online for benefactors from the USA. The organizers were UCU and UCEF.

First of all, let me join my colleagues in thanking all of you for supporting the Ukrainian Catholic University and, with your legacy commitments, enabling us to be agents of historic change so important for Ukraine.

During the inauguration of UCU, the Rector at that time, Father Borys Gudziak repeatedly stated that Ukraine does not need just one more university – there are actually too many of them. Ukraine needs a qualitatively different university, and at the time it meant that this university had to break decisively with the traditions and unspoken rules of the Soviet educational system.

However, those who go against the current should not be surprised that the current will resist them. Those who introduce fundamental principles into the environment cannot but irritate the unprincipled.

People who take on such a mission almost automatically become missionaries. Because this is truly missionary work – to be a space free of corruption in a society with low resistance to it. Or being an institution based on values, in a society where most people believe that living honestly is bad for themselves.

It was hopeless to overcome this legacy directly – or, as we Ukrainians say, “in the forehead.” What was more promising was to strengthen the alternative. Indeed, such an alternative for the Ukrainian education system has been embodied in UCU. It managed to overcome, at least, three outdated stereotypes.

UCU argues that, in a society where the word “religious” is often synonymous with the word “archaic”, being a religiously oriented university does not prevent it from being a modern university. UCU, truly, belongs to the brightest modern phenomena of the country.

Confessional stereotypes were no less disturbing. On the one hand, we were proud of inheriting the name “Ukrainian Catholic University” which was used by Patriarch Joseph. On the other hand, would this confessionally charged name be adequate in Ukraine which is a predominantly Orthodox country? Our answer was the following: “The perception of the word ‘Catholic’ depends on ourselves, on our openness and willingness to cooperate.” And UCU coped with this task brilliantly. Its ecumenical potential is expressed in many joint projects and mutually beneficial contacts. Therefore, for many students from non-Greek Catholic regions of Ukraine, studying at the Ukrainian Catholic University is considered «круто» or, to put it in English terms – fashionable and “cool”.

Finally, in Ukraine, as it was mentioned above, there is a persistent stereotype that living honestly means becoming a “loser.” Thus, UCU has proven that being a value-based university ​​does not prevent us from being an effective institution. Instead of losing our chances, as some believe, we multiply them.

The role of UCU in the revitalization of the Church is also very important. While combining faith and reason, UCU has become a meeting place for the secular and religious segments of Ukrainian society. As a promoter of values, it has become a place of “soft” evangelization for those who have never encountered a religious tradition before.

The times of socio-political crises are, perhaps, the periods when the mission and ethos of UCU are manifested in the brightest way. The UCU community was an active participant in both protest Maidans (the Orange Revolution of 2004 and the Revolution of Dignity of 2013/14) and, in the name of our martyred colleague – Professor Bohdan Solchanyk, joined the Heavenly Hundred. UCU publicly responded to the social challenges of our time. It was especially visible on the terrible Euromaidan night on December 11, 2013, when riot police tried to disperse the Maidan. A few hours later, in the morning of the same day, the UCU’s community declared civil disobedience to the President and his government. Such challenges became a test of UCU’s spiritual maturity.

Ukraine has not yet reached the level of sustainable development, so we will definitely face various challenges in the future. Therefore, UCU’s mission remains relevant. However, we live in a globalized world, so the solutions that UCU offers to Ukraine may be important for the whole world.

As we know, in today’s world, authoritarian ideas have become popular again; governments are tainted with the logic of national selfishness, and the multiplication of alternative truths undermines the ability of governments to make the right decisions. How to distinguish the Truth among the many faces of lies? How to stop the chain reaction of hatred that infects more and more people? How to protect ourselves from violence, which is increasingly presenting itself as the only way to stop evil?

These tasks cannot be fulfilled by a single nation alone. There is a great need to conceptually reload the fundamental ideas underlying human civilization. And values-based universities can play an important role here. This task requires intellectual platforms that could become crucibles for nurturing new ideas. UCU can and should become one of such platforms, as the freedom of intellectual search and intellectual inquiry – disciplined by ethical principles, is the core of its mission. We need to “get out of the fog of the lowlands” to see the higher ground – the peaks of great ideas. The latter must again attract us with their magnetism and inspire confidence in them.

Having said these lofty words, I cannot fail to admit the fact that UCU is a community of imperfect and sinful people. We advocate the need to build value-based institutions ​​not because we are righteous people. Rather, our vision is based on our worldview and life experience. And may God help us to fulfil our mission and promote the changes the Lord is willing to make in this world!