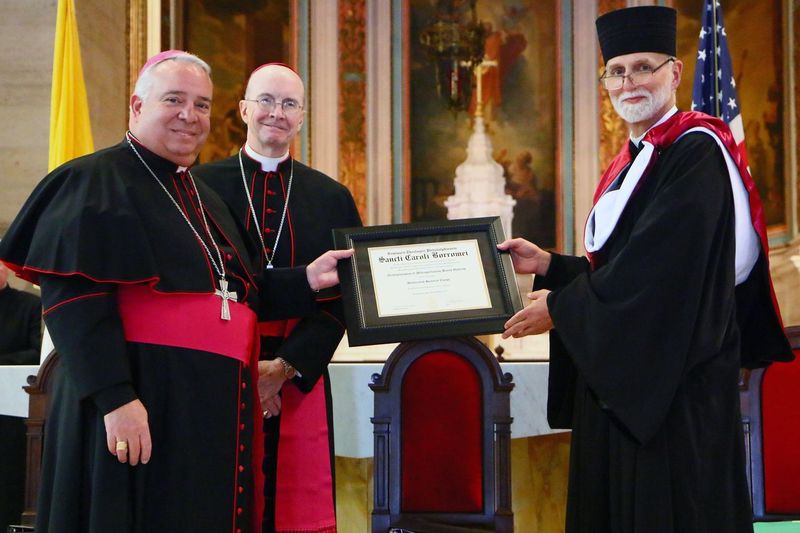 Bishop Timothy C. Senior, who serves as Rector, remarked, “As the Seminary graduates yet another class of seminarians and graduate students, it is an honor for Saint Charles Seminary to present a Doctor of Humane Letters degree to such an accomplished scholar and figure in global Catholicism”

Archbishop Gudziak also gave the keynote address of the Concursus, as the annual graduation ceremony is known.

“We are privileged, we have authority and we have a strength that our Baptism in Christ gives us. It’s a mysterious, mystical privilege, authority and strength. The way we live it is guided by the example of our Lord Himself. You, graduates, for a number of years have been honing the understanding of your Baptism. Everything that you have experienced in this seminary–your prayer and your studies, the spiritual direction, the good therapy, the accompaniment–has as its goal your growth as members, as parts of the body of Christ.”

The Archbishop stressed that new priests will serve in a very difficult time and that the Church faces mounting challenges. He asked them to rely on God.

“One of the greatest misconceptions that we have as human beings and one of the most dangerous in spiritual life is a sense of self reliance, self sufficiency. America celebrates self-reliance, this is a stance, we see it from athletes to politicians, from movie stars to business people. American responsibility is a great thing and I hope that we all can grow in it as citizens and as a nation. But we cannot make it alone. The Son of God in His mission, as we are reading both in the Byzantine and Latin lectionaries now, emphasizes His constant reference to the Father. Don’t be alone! Don’t commit heroic suicide! Be with God! Be referential and relational. Foster your fellowship”.

About Saint Charles Seminary: Founded in 1832, Saint Charles Borromeo Seminary has been forming men for priestly service in the Catholic Church for more than 180 years. In August 2019, the seminary reported an overall enrollment of 165 seminarians. Saint Charles’ seminarian population is becoming increasingly diverse with approximately 30% of its students now coming from Asian, Latino, or African countries or nationalities. Of the 42 new seminarians, 19 are seminarians studying for the Archdiocese of Philadelphia, and there are 75 new or returning seminarians for the Archdiocese of Philadelphia studying at St. Charles.