On the morning of 18 June, Artemiy Dymyd, UCU graduate, died in the war. He was only 27.

As Artem’s mother, Ivanka Krypyakevych-Dymyd, wrote, he was covered by mortar fire near Donetsk (updated information: Artem died from mortar fire during a battle in the Mykolaiv-Kherson direction).

Artemiy was the son of Fr. Mykhaylo Dymyd, first rector of the Lviv Theological Academy (now UCU), a chaplain of the Maidan, our professor, and Ivanka Krypyakevych-Dymyd, noted iconographer. Grandson of historian Ivan Krypyakevych and priest and violinist Artemiy Tsehelskyi, who spent seven years in exile in Siberia.

He was a graduate of the Ukrainian Catholic University, Humanities Faculty, History Program.

“Yesterday we received sad news. In the Donetsk Region during mortar fire, Artemiy Dymyd died, the son of noted priest Mykhaylo Dymyd, first rector of the renewed Lviv Theological Academy, and Ivanna Krypyakevych-Dymyd, noted Lviv iconographer. On behalf of our whole Church, I want to express sincere condolences to Fr. Mykhaylo, Ivanna, and the Dymyd and Krypyakevych families on this great loss. This priestly family, with its pain in today’s circumstances in Ukraine, is an icon of our Church, which is the heart of ministry to our people and carries the burdens, pains, and sufferings of the Ukrainian people, its youth. This heroic death has shaken all the intellectual and scholarly circles of Ukraine, and today we say: Heroes do not die! We ask the Lord to receive Artemiy in His embrace and grant him everlasting memory!” So wrote the Head of the UGCC, Grand Chancellor of UCU His Beatitude Sviatoslav Shevchuk on his web page.

At the initiative of the family of slain soldier Artem Dymyd, the Ukrainian Catholic University is starting the Artem Dymyd Scholarship Fund. The scholarship will be awarded at the university to Plast scouts who are accepted in bachelor’s and master’s programs at UCU. The fund was created in cooperation with the Ukrainian scouting organization Plast and Ukrainian clothing brand Aviatsiya Halychyny.

You can donate to the Artem Dymyd Scholarship Fund here https://supporting.ucu.edu.ua/donate/?order=artem_dymyd

He was a Plast scout, a member of the Lviv station, Friend Kurka. An active participant in the Revolution of Dignity, he served in the special battalion Harpun and the Azov battalion.

As written on the Plast Lviv web page, Artem joined Plast at 7, was a youth in Bohdan Khmelnytskyi Troop 69 and eventually became an educator. He was a member of Order of the Iron Jail Troop 15. “A participant of national camps: Lehion, Hoverla, and KVT. There was no sport which Kurka did not try. He and adrenalin were inseparable. His life was a social adventure. He was enthusiastic about military scouting, parachuting, and travelling,” write the Plast scouts.

His spirit never wavered on the Maidan. He helped others get a positive attitude. He witnessed the events of 20 February 2014 on Instytutska Street. In the spring of that year at the start of the occupation of Crimea, he went to the peninsula to fortify the pro-Ukrainian forces under the guise of buying a motorcycle. After military actions started in eastern Ukraine, he volunteered with the Azov battalion. He took part in battles in the Shyrokyi district. He later transferred to the special subdivision Harpun.

After returning from the ATO, he was actively involved in self-development and travel. He did parachuting and other extreme activities. Once he drove to Iraq on his motorcycle. He visited more than 50 countries.

On 24 February 2022 he was in the USA. But immediately with the start of the full-scale invasion he went to Ukraine. In the USA he bought body army and a helmet and, in order not to pay an extra cost, he wore them on the plane. He told a surprised stewardess that he was from Ukraine and that it was safer for him that way. At home he gathered the rest of his equipment from the times of the ATO, took the oath, and immediately went to the front.

It is impossible to measure this pain… a great loss for the family, our community, and all Ukraine.

Let us join in prayer for the soul of recently-deceased Artem. 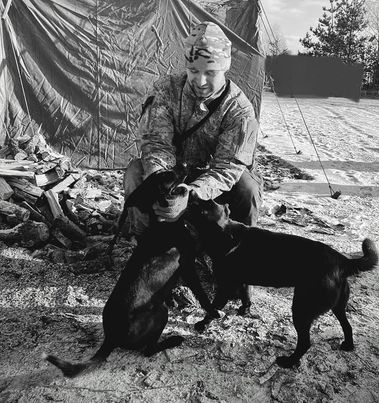 In December 2021, Artemiy told about himself in the program “Rayon”.