Last Saturday, 9 February, UCU graduated into adult life 125 masters in six fields: history, theology, human rights, non-profit management, Christian pedagogy, and organization of leisure. The honored guest of the commencement ceremonies was Polish civic activist Krzysztof Stanowski. We have tried to capture the atmosphere of this winter ceremonial academy and note all the most interesting aspects of the ceremonies. 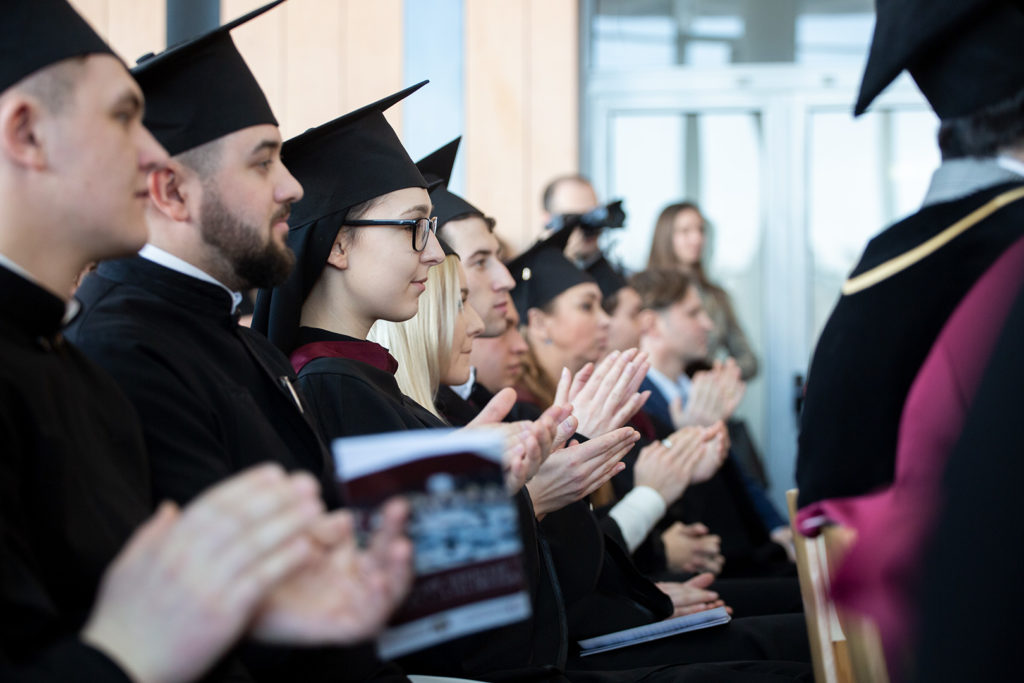 Start of the ceremonies: Inspirational words

After the Divine Liturgy, all the “newly-minted” masters, their parents, teachers, program directors, and vice-rectors gathered in the Dining Hall, where Fr. Ihor Boyko greeted the community: “Tomorrow will be a new era: you will wake up not as students but as graduates. And what you will do to make the country and the world better will depend only on you.”

Father emphasized that there are two important days in every person’s life: one’s birthday and the day when we understand why we have come into this world: “I hope that this day when you receive your UCU diploma will be the day when you realize that you, and not someone else, are the intellectual elite of our country. And may this realization accompany you all the time in adult life.” With these words, Fr. Boyko officially began the commencement ceremony. 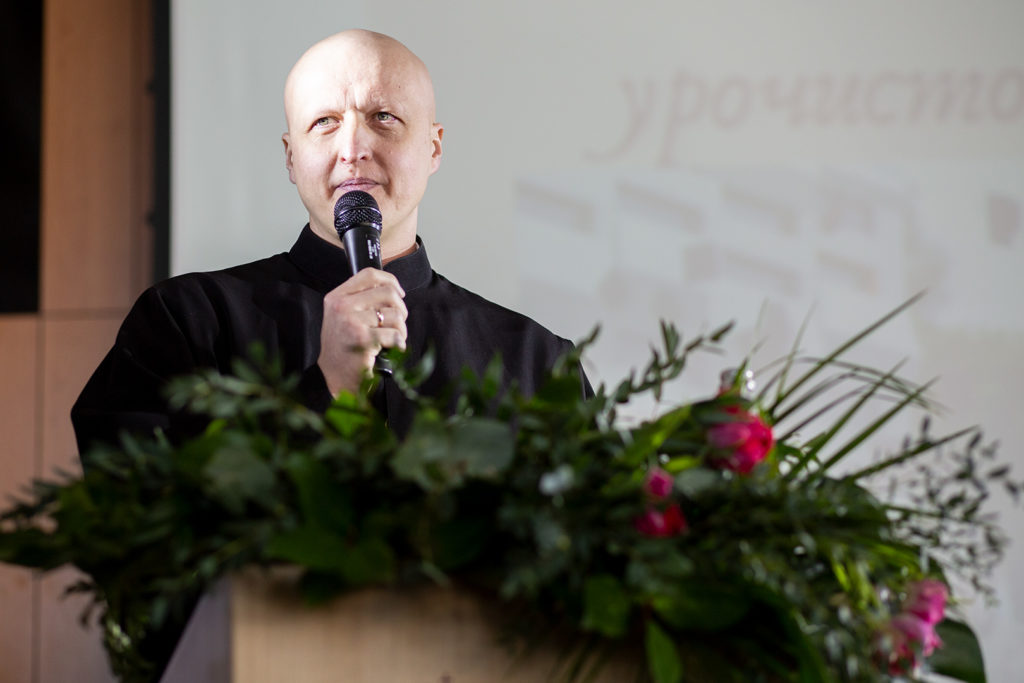 Polish civic activist and friend of UCU Krzysztof Stanowski was the honored guest of the winter commencement. According to UCU’s Dean of the Faculty of Social Sciences, Volodymyr Turchynovskyy, Stanowski not only knows Ukraine’s potential and sees the Ukrainian context in the international arena; by his activities, which go far beyond the Polish border, he honors, loves, and supports Ukrainians. A former dissident, co-founder of Polish Solidarity, twice Assistant Minister of Education and Foreign Affairs of Poland, Stanowski was one of the organizers of the Polish Revolution of Dignity in Ukraine and co-founder of the Committee of Civil Solidarity with Ukraine; and, since 2016, he has been a member of the Advisory Council of UCU’s Institute of Leadership and Management.

“He is a big person with a big heart, great experience with Catholic education and a clear vision of the future… I don’t know if he knows about our concept of the three S’s, but his life is a model example of its implementation.” With these words, Volodymyr Turchynovskyy handed the microphone to the honored guest. 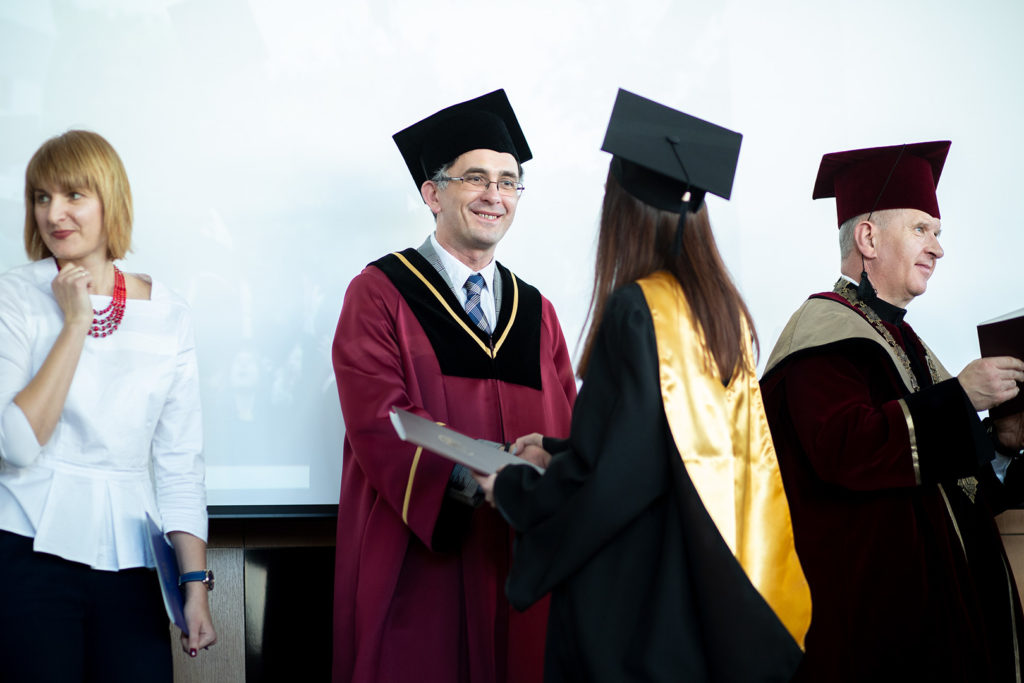 And though Volodymyr Turchynovskyy, presenting the guest, recalled details about the speaker which it might be hard to find on the Internet, Stanowski, nevertheless, was able to surprise and gain the attention of those present, giving a brief account of his past as a student. In the words of the honored guest, the Catholic University of Lublin, when he was a student there, was the first and only non-government university between Tokyo and Berlin, that is, the only chance to receive a higher education if the student had a problem with the government.

From the following story it is not difficult to guess the problems of Stanowski the student. His academic director managed to read his diploma-paper only a year and a half after the defense: “When we confirmed the theme, he ended up in prison. This did not prevent me from defending it, but later I also ended up behind bars. But look how easy it is today to graduate from a university!” The honored guest joked.

Recalling past times, Stanowski addressed the general national Polish experience, which helped the country go from protests to unity: “I remember how, 30 years ago, Poles were world champions in protests and underground publications. No one was better than us in the world! But at some moment we realized that our strikes and meetings against the government would be useless if we didn’t know how to manage ourselves and take care of our neighbors. We realized that if we united, there would no longer be people who do protests. Then two groups of people sat down at the table for discussions: those who had just left prison and those who had put them behind bars. They understood that they had fought with one another for the last 10 years. But at that time they decided, nevertheless, to think about a common future, about what they could do together.” 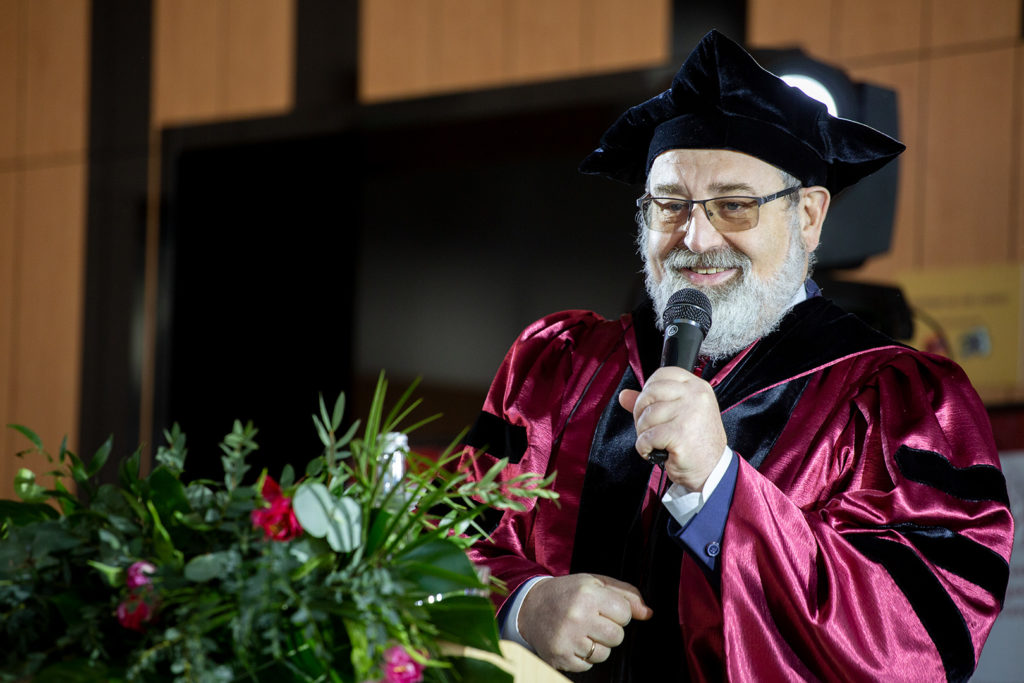 After his historical remembrances, the honored guest began speaking of social innovations: “When I came to you, I was thinking about social innovators, because this university forms a corresponding worldview. But there are always few true innovators, literally one in a million. And the particular quality of these people is solving problems without the help of policy, thanks only to their efforts and work. I often hear that social entrepreneurs are not interested in teaching people. It is said that they only feed them with fish, instead of teaching them how to fish. But these people truly change the whole fishing industry, and not only the views of one fisherman. As a result of the activities of a real social innovator, there will be changes in the whole society, not only in the consciousness of a few people.”

Finally, Stanowski called upon the masters not to fear difficulties, and he accompanied this advice with an interesting story from the past: “When I was sitting in prison, the most authoritative bandit once came up to me and said: ‘Mr. Stanowski, the first 10 years are always the hardest.’ And today I know this is true, because if you want to change something, you need to be ready for the fact that sudden changes don’t happen.” At this, UCU Rector Fr. Bohdan Prach, who studied at Lublin Catholic University in the same years as Stanowski, responded to the guest that it really will not be easy: “But it should not be easy. If something is easy for you, this often can mean that sooner or later your work will turn out to be of use to no one. But the most difficult first 10 years can possibly be totally reduced to two, if you know how to join with the like-minded and work together,” added Fr. Rector. 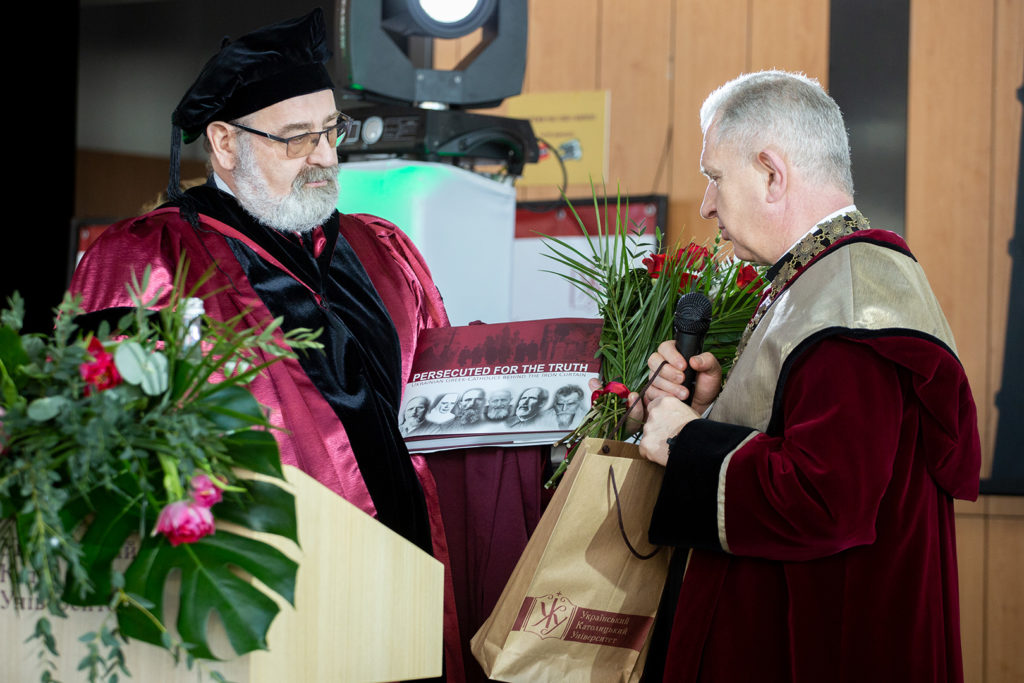 The parents who had come to share the joy of commencement with their new masters were proud of their children and also consider that an UCU master’s degree is a sure step to a successful future. “My son received a diploma in history with distinction, and we are very happy that this happened here. He had opportunities to enter the country’s most famous universities, but, among all the best, he chose UCU. I consider earning a master’s here to be a great accomplishment and expect that I also am at least a little involved in this. But this is not precisely the last level. We are moving ahead. And our future will also be connected with UCU.” So Svitlana Olezhko, who travelled from Kharkiv to see her son in his master’s gown, shared her emotions and plans.

Mykhailo Hrynchyshyn, the father of a graduate in the Human Rights program, said that studying human rights at UCU was his daughter’s independent decision: “But I am glad that my daughter studied here, and I am grateful that we have such universities. Every young person is a creation of God. Their life is their road, and parents only have to help, encourage, and rejoice, like those here today!” 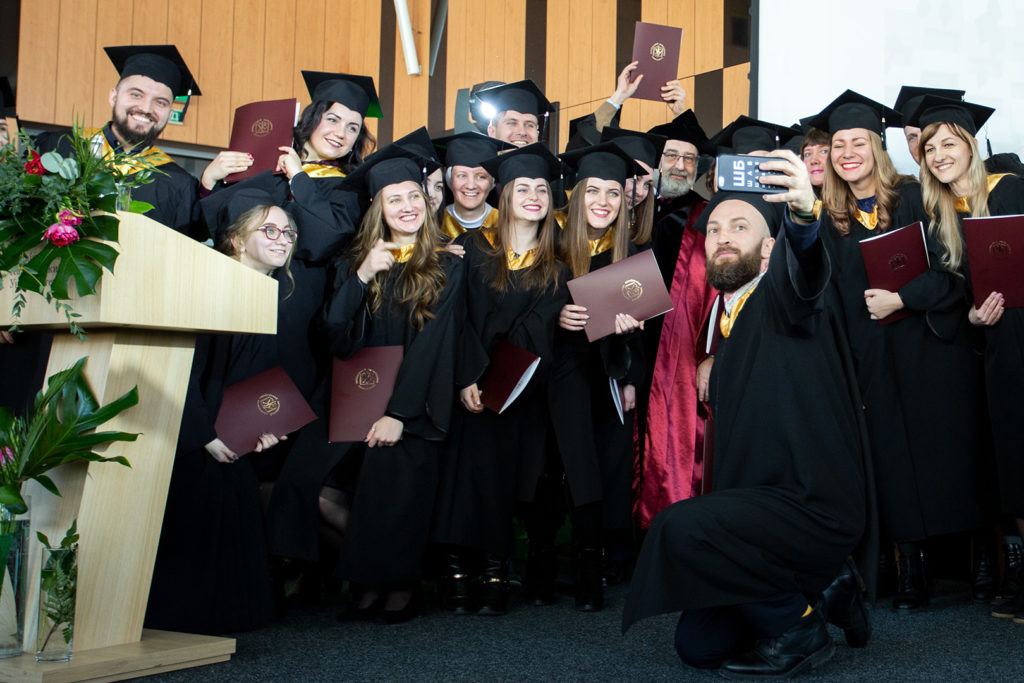 This year’s valedictorian award and the opportunity to address the community with the final speech was given to Oleksandr Kozhukhar, a graduate of the first class of UCU’s Master’s in Human Rights Program. “Unlike my 15 classmates, who are sitting in the hall, I still feel like a student. I am worried, and worry is the most characteristic emotion of a student. Still, in fact, in addition to worry, I also feel countless positive emotions, because our whole class successfully completed studies. We all made it to the end and received degrees. And this is a real accomplishment at UCU,” smiled the valedictorian. During his speech, he thanked the university for combating and rooting out his personal no’s, like “I don’t know” or “I am not sure,” and also for strengthening others no’s: don’t give in and don’t stop. He also shared his story at UCU. It turns out that it began long before he entered the master’s program:

“Ten years ago I was sitting at a high school specializing in languages, but knowing no foreign language and with one interest in life, Counter-Strike. Eventually I took language courses at UCU, but I understood that I had not come because of English but because of global changes, because of answers to my questions. During this relatively short period at UCU, I have made real progress. I not only learned English and successfully passed the standardized test, but I stopped playing computer games,” explained Kozhukhar.

There was then a four-year interval in his relations with UCU, but when he again ended up here as a student, he didn’t have time to blink. He visited Washington, Strasbourg, and other cities for international conferences and internships abroad. And this was all thanks to UCU, he admits. “I don’t know if each student here has experienced such adventures, but my fellow classmates, with whom I spent an exceptionally busy year and a half together, will tell you stories very similar to mine.” 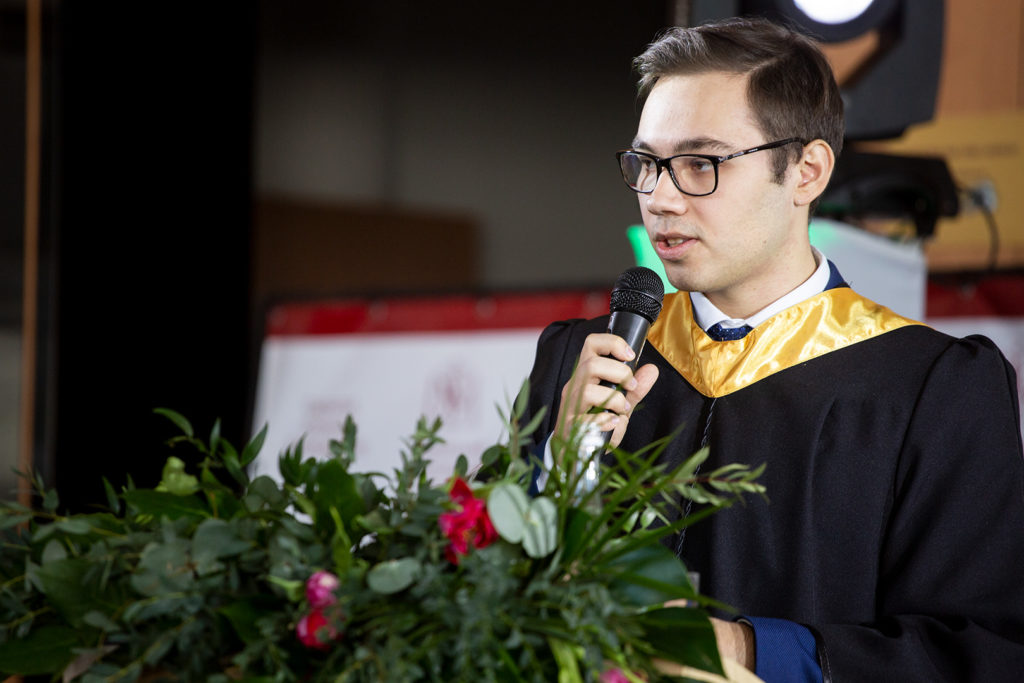 “We, however, did not study at UCU only to fight our own no’s or improve our strong sides. We are here, first of all, to help others. As lawyers, we go out to help when norms and rules have been violated, such as ‘do not steal’ or ‘do not kill,’” added this year’s valedictorian, Oleksandr Kozhukar. He called on all the graduates never to stop or throw up their hands, and expressed hope that this first graduation of the Master’s Program in Human Rights is only the beginning for lawyers at UCU.

We asked Sophia Opatska, the Vice-Rector for Academic Affairs, where the UCU community finds the strength and courage to be in the avant-garde of Ukrainian higher education and to launch and carry out programs which have no analogue in other Ukrainian universities: “With the example of the masters graduating today, it is easy to understand why we are launching new programs,” explains the vice-rector. “Do we need to have the rule of law in Ukraine? It’s very necessary. And data science? Everyone talks about this, but not everyone understands why it’s necessary. We are certain that, for government structures, for business, and for the whole country in general, this is extremely important, because the development of computer sciences, in particular, could position Ukraine on the global map of the world. And, when one looks at our program in non-profit management, it is possible with one’s own eyes to see how civil society is changing and developing in Ukraine. And this rapid development clearly requires quality management.” 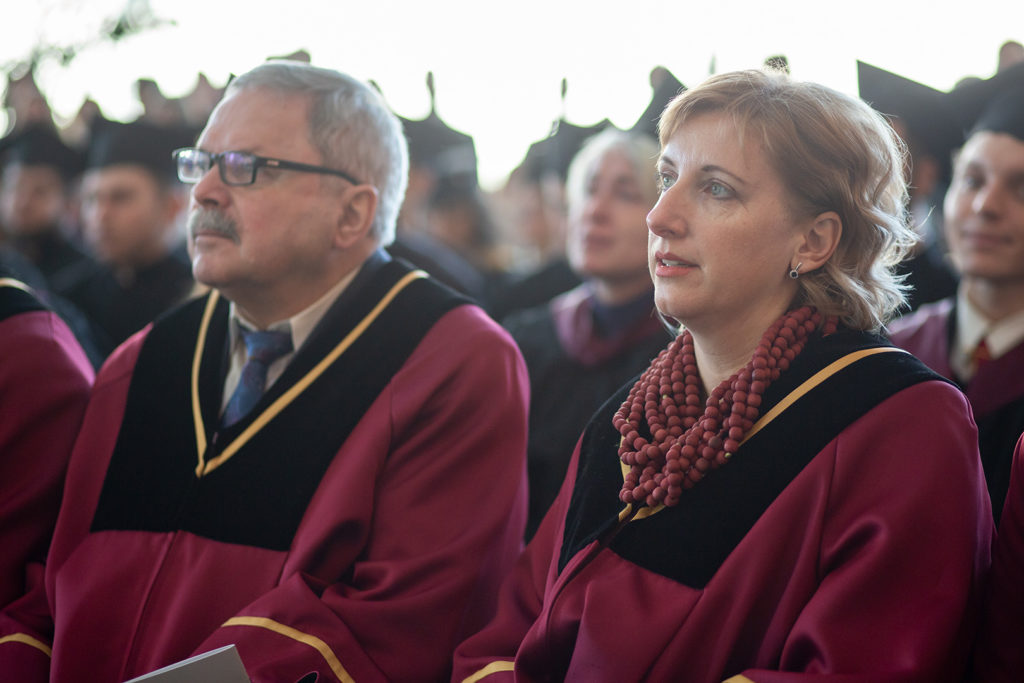 We asked Vasyl Kulevchuk, graduate of the Master’s Program in Non-Profit Management, what he considered the most important thing he learned at UCU, in addition to professional knowledge and skills. He responded that it was the environment and worldview: “All 30 of my classmates upon entrance already had experience working in the civil sector. To be in a group of people who want to develop themselves and to learn something new together is very energizing! And also, in a year and a half UCU re-formats your worldview: before entering, I was only involved in projects, but here I understood that this is only a small part of a wider context. When you are not only thinking about the needs of your community but thinking about how it can change the whole world, you understand your great responsibility. But, at the same time, your every movement can lead to truly unbelievable changes.”

After the awarding of diplomas, the ceremonial academy traditionally concluded with the ceremony of tossing up caps and together singing the student hymn “Gaudeamus.” 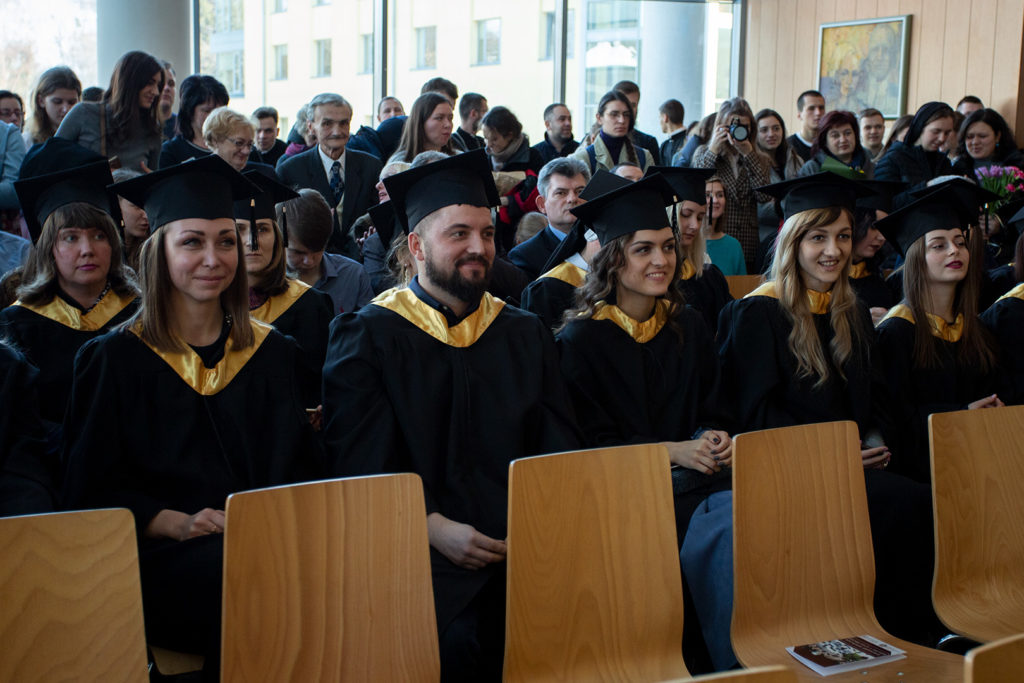