The Ukrainian Catholic University has developed a profile of a graduate which includes seven criteria: humanity, the ability to make ethical decisions, professionalism and entrepreneurship, civic activism, global involvement, responsibility and accountability, and vitality and adaptability. The profile is a summary of work and discussions with focus groups of teachers, students, program leaders, and potential employers, and has been approved by the Rector’s Office and the UCU Senate. In the words of UCU President Archbishop Borys Gudziak, this profile is the result of long and deep spiritual reflection which flows from the mission of the Ukrainian Catholic University, its concrete historical experience, and a sober assessment of real challenges which face society in the 21st century, in particular those facing young people.

“In the 21st century, it is sometimes considered ‘politically incorrect’ to formulate clear ideals, even more so, Christian ones,” comments Archbishop Gudziak. “There are serious bases for such skepticism, for too often cheap and showy slogans are used to conceal emptiness. Also, keeping in mind this danger and today’s skepticism, the Ukrainian Catholic University considers it necessary to precisely formulate its goals regarding students.”

As the Archbishop and Metropolitan of Philadelphia stated, the central priority in the life of UCU is students, their education and formation. “Unambiguously articulating our prayer and dreams regarding students, we are aware that we are on a pilgrimage – these ideals, principles, and values can be realized only in actual life. Such a pilgrimage is not an abstract philosophy but a journey together, accompaniment, a feat that will demand mutual support and friendly correction, but, above all, great blessing from God. I commend this profile to teachers, staff, and students of UCU, their parents, and the wider circle of friends – representatives of the Church, the faithful, and our generous benefactors,” emphasized the archbishop.

The profile of a graduate also takes into account how UCU can develop the above-mentioned qualities. They are formed in a number of areas: worldview, experience, knowledge, skills, and character. Each of these points also contains a detailed description of how it is demonstrated in action. For example, experience at the university is formed through volunteerism, life in community, and international involvement; worldview through patriotism, Christian values, and love of life and people.

UCU Senator Natalia Popovych, founder of One Philosophy Group, is convinced that the development of the profile is an important roadmap for forming new generations of students and graduates of UCU: “I am very impressed that, in creating the profile of a graduate, the university demonstrates the same strategic and farsighted approach which distinguishes it from all others. UCU poses the question: What do we want to achieve in perspective, in 10-20-30 years? And then it plans its path to that point with 5-7 annual strategies. In this, UCU stands out from many organizations, especially among institutions of higher education in Ukraine which ‘float with the stream’ and don’t ask themselves such questions.”

The senator thinks it is particularly important that, among the characteristics of the UCU profile are humanity, the ability to make ethical decisions, and responsibility and accountability. “For this is what today’s world and the world of the future so need, the world of artificial intelligence, the world of lawlessness and inequality, a world in which right now more and more is digital, but the influence of the human being in the last centuries was so ruinous for the planet. These characteristics already and, in the future, will even more positively distinguish graduates of UCU. Also, the members of the working group took care that all the characteristics are supported with concrete examples, witness and implementation in life. For example, UCU defends professionalism with a very severe policy forbidding plagiarism among students and teachers. Entrepreneurship and civic activism are encouraged by various programs where students realize their potential in student government, student civic organizations and initiatives, and through interaction with mentors from a circle of friends of the university/entrepreneurs for the realization of innovative projects. Adaptability and vitality among graduates are also signs of the university’s serious attitude to introducing the best practices of Metropolitan Andrey Sheptytsky, who above all wanted Ukrainians to be able to respond to any challenges of the times through civic activism, entrepreneurship, and the ability to cooperate. I am certain that this development is an important roadmap for forming new generations of students and graduates of UCU of whom we can be proud.”

Sophia Opatska, UCU’s Vice-Rector for Academic Affairs and founding dean of the Lviv Business School of UCU, emphasizes that, during the development of the profile, the working group, senators, and representatives of the Rector’s Office took into account the global context: “We analyzed today’s challenges in order to see how to respond to them. The working group kept in mind analytical reports of various international organizations regarding competencies which will be needed in the labor market in the future.”

The vice-rector adds that, in addition to skills and knowledge which must be taught at a university, for UCU it is important that students receive experience. “But the largest contribution we want to make in the development of the character of young people is the understanding of one’s own vocation and the formation of one’s worldview.”

Sophia Opatska shares her observations that in recent years during graduation ceremonies, UCU graduates very often in their speeches used the word “love”: “And, actually, in the profile one of the elements which determine worldview are love of life, people, and one’s country.”

The profile of a graduate was developed to underline the common characteristics of all UCU graduates, regardless of major. Of course, each student of a certain specialization is distinguished by professional skills from another – a theologian from a lawyer, an IT specialist from a political scientist. However, they all, as representatives of a Catholic university, also have common characteristics, which are noted in the profile.

“We form in students many qualities but, until now, we didn’t have a stated vision of which among them are priorities. The developed profile was agreed upon by focus groups of teachers, students, and potential employers, and we took into account their feedback,” explains Dmytro Sherengovsky, Deputy Vice Rector for Academic and International Affairs and a teacher in the program Ethics-Politics-Economics. 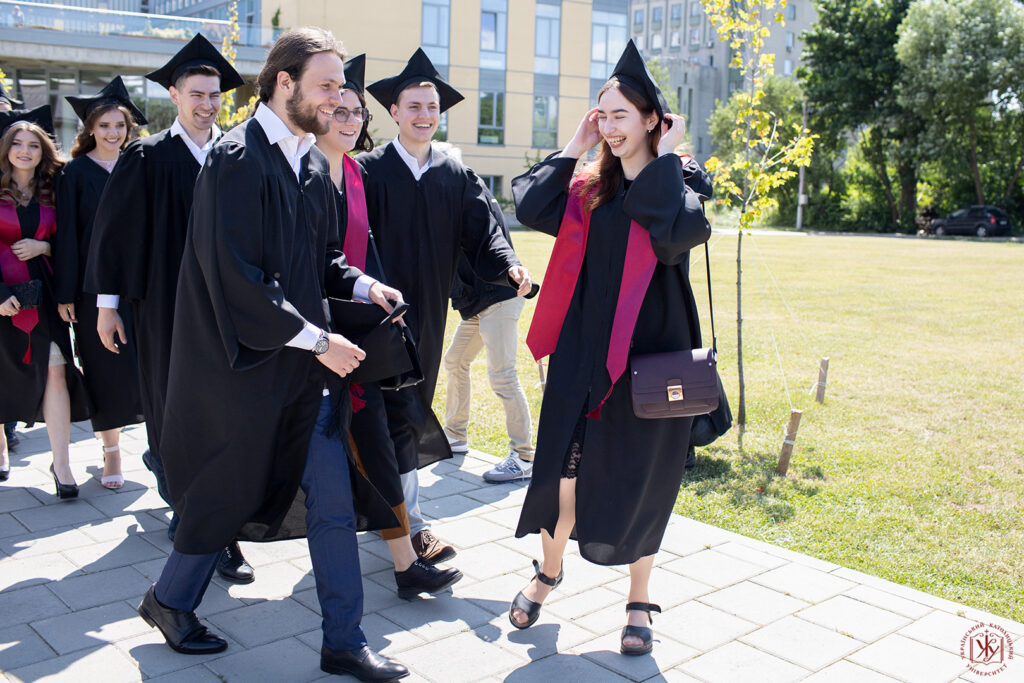 Dmytro Sherengovsky explains that the formation of a student happens not only during study in an educational program. There is also spiritual formation, the Worldview Core program, an international component, etc. “Our task was to look and think about what we want a graduate to be like. With this goal, we developed a profile where priority qualities are determined. We paid attention to criteria from the concept of integral human development and Christian formation. We also tried to assess, according to the methods of various international agencies, what challenges await our graduates. At the intersection of these elements, we determined the qualities which an UCU graduate should possess.”

An English-language version of the graphic BELOW will be forthcoming> 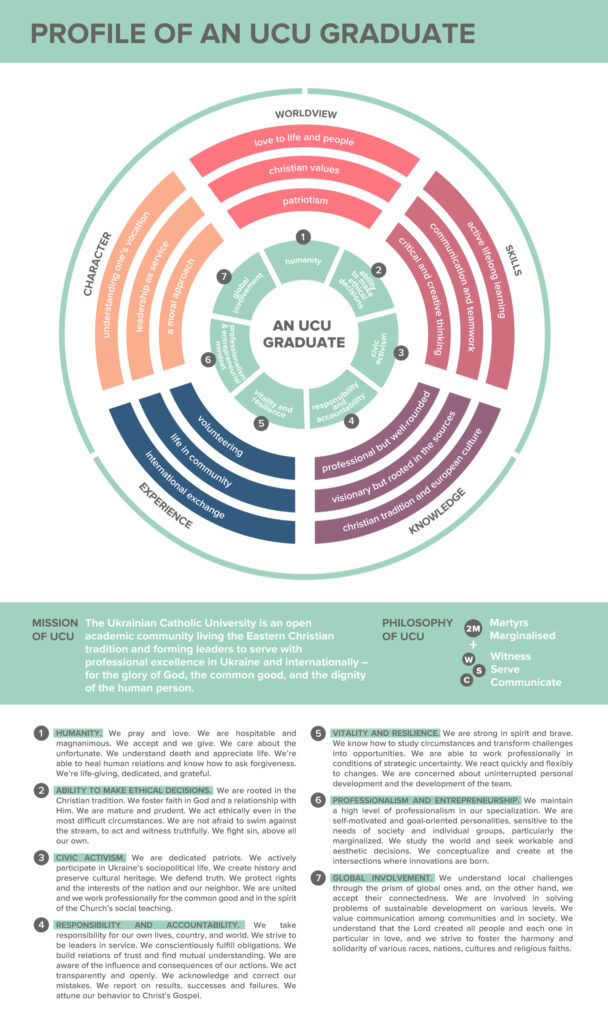