UCU’s Vice-Rector for External Relations and Director of the Institute of Church History, Dr. Oleh Turiy, has been distinguished by the cross “For Church and Pope.” This award of the Vatican State is the highest possible one for a layperson in the Catholic Church. 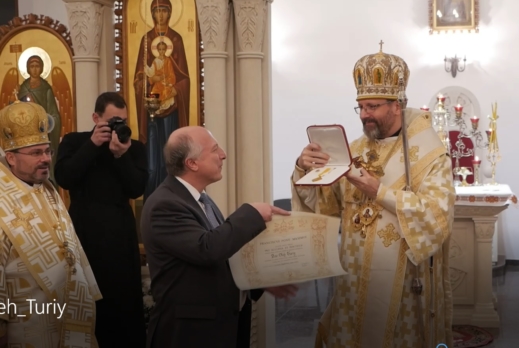 In the name of the Holy Father the award was presented by the Father and Head of the UGCC, His Beatitude Sviatoslav, as part of the dedication of the Church of the Most Holy Mother of God, located at the Patriarchal Home in Lviv.

“We thank you for your work, and expect two times more!” The Head of the Church thus greeted Oleh Turiy.

The cross “For Church and Pope” (Latin “Pro Ecclesia et Pontifice,” also known as the “Decoration of Honor”), an award of the Vatican State, is considered the sixth oldest award of the Roman Catholic Church. The medal “For Church and Pope” was established by Pope Leo XIII on 17 July 1888 with the apostolic letter “Quod Singulari Dei Concessu,” on the occasion of the 50th anniversary of his priestly ordination. The award can be bestowed to clergy and also laypeople, men and women, 45 years of age or older, who have a long term (not less than 25 years) of service and distinction in service to the Catholic Church and the Holy See.