In 2021, Ukrainian Catholic University introduced service learning. In this format, students can take part in the work of various civic organizations and carry out their own projects for them. This year, two service learning projects from UCU received honors for Uniservitate Global Award 2022.

Uniservitate Global Award 2022 is the first global competition as part of the Uniservitate project, in which UCU is a participant. This project aims at spreading service learning in Catholic institutions of higher education and has joined a network of more than 30 institutions throughout the world.

The program of the competition unites several hubs in which each determines its winner.

The project “I’m different!”, introduced by Yuliya Vinton, took one of two first places in the hub for Central and Eastern Europe and the Near East. The project “I’m different!” gives students who chose the subject “In search of God” an opportunity to get involved in the integrational theater Smiles and Tears, which is part of the community of the Emmaus Center for Support of Persons with Special Needs.

Yuliya Vinton said that, before involvement in the theater, the majority of students had no experience of interacting with people with disabilities. “For them, participation in the project ‘I’m different!’ is a challenge, a game, experience, and education at the same time. If each student would dedicate an hour of his or her time to society, the number of volunteers could change this world,” explained Yuliya Vinton, UCU professor. 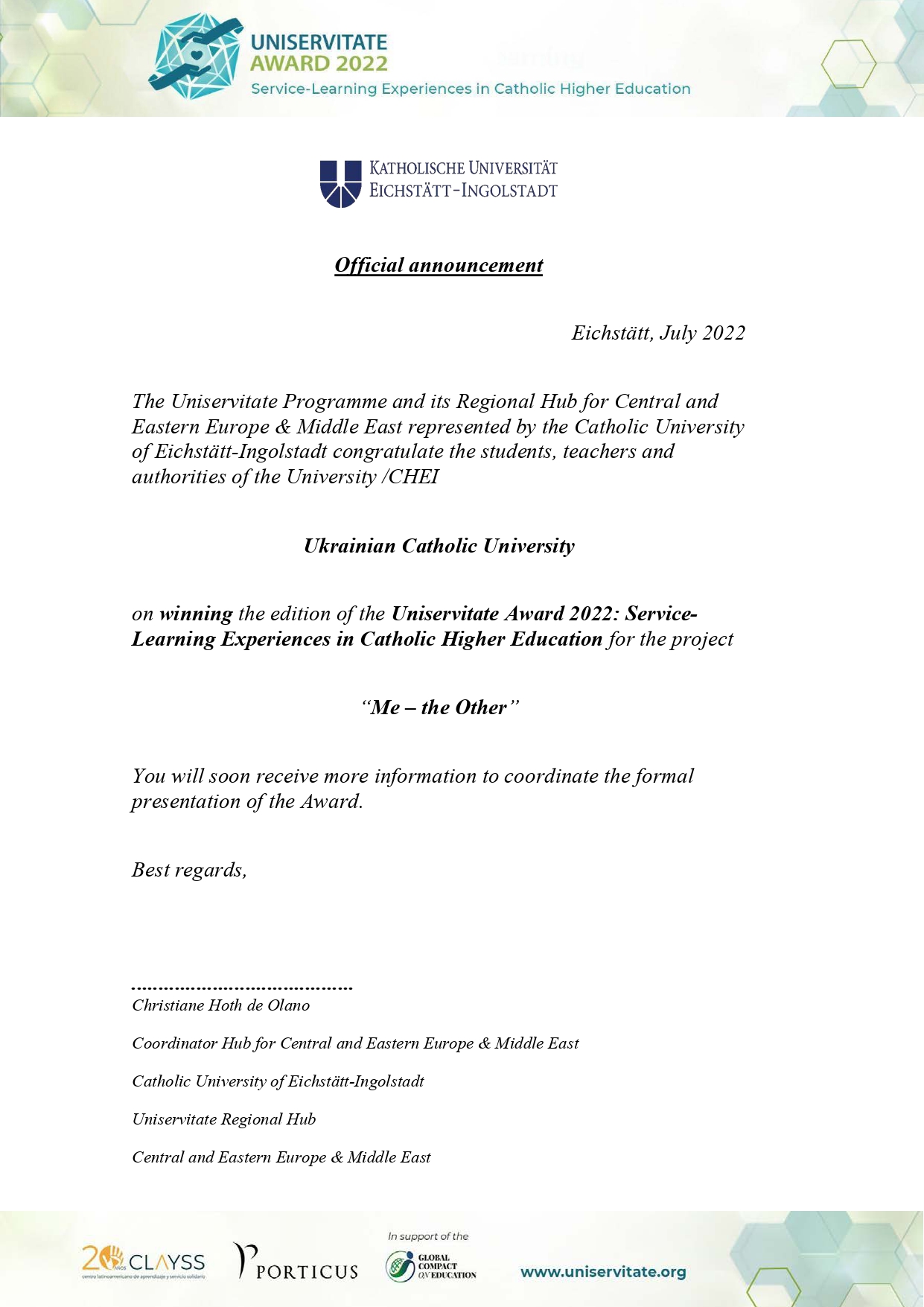 Read more about “I’m different!” in a Ukrainian-language article about what integrational theater can teach

The project “Shelter for internally displaced persons” also received a special honor for the hub Central and Eastern Europe and Near East.

The shelter received refugees fleeing from the war and was organized by UCU volunteers in the first days of the war on the premises of the UCU Faculty of Theology and Philosophy, with the support of benefactors from Germany.

Over three months of operation, the shelter accepted 340 people, the majority of whom are people with disabilities and members of their families. For students of the Social Work Program, this project was not only an opportunity to help others but a base for practice.

Yuliya Kokoyachuk, head of the Social Work Program and coordinator of the project, said that work with people in various categories of vulnerability allows students to improve their skills and knowledge in conditions of real interaction with people: “Service learning gives an understanding of the importance of what you are doing. You see the value of your work here and now. I can’t say that I wanted the students to get this kind of experience, because it’s very painful. But this is a crucial time for Ukraine and I’m glad when I see that, with their work and their knowledge, the students positively influence people’s fates.” 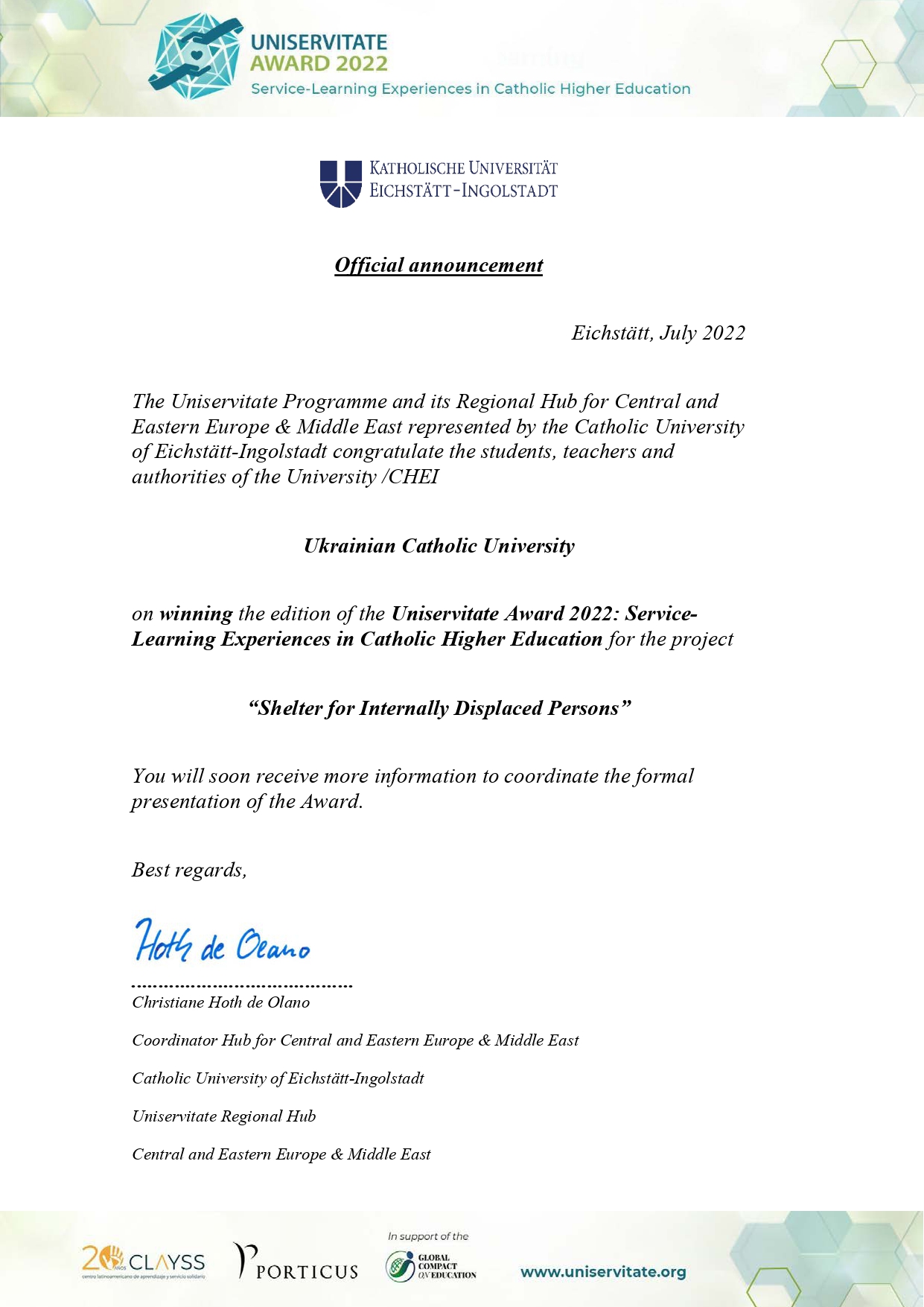 Read also: Renewing faith in yourself – How UCU students help refugees and those wounded in the war

Olha Mykhailyshyn, head of the Service Learning Center, said that, above all, it’s a great honor to be among the winners of the first global competition of the best service learning projects: “This demonstrates that UCU is on the right track in introducing s.l., and the projects which we are carrying out are of high quality, well-thought-out, systematized, have an influence on society, and can be spread as the best examples of our experience. There the goal, set in the UCU Strategy, is fulfilled not only by quantitative indicators but a quality product stands behind every number.”

“It’s very symbolic that among the winners is a project directly connected with the war and also one carried out before the war. For, when we achieve that awaited and dreamed of great victory, we will continue, with small daily victories, to build our country. Each of us, each day, each in his or her own place in his or her own way,” said Olha Mykhailyshyn with conviction.

We recall that UCU annually conducts an internal competition of service learning projects. The head of the service learning center encourages professors to provide information about them, even when there is doubt whether a project fulfills all the requirements of the service learning idea or if a project is already conducted. “Even during the war, UCU not only continued the educational process but complemented it with more social significance. I think that I’m not mistaken if I say that, with a great social demand for support, the emphasis in service learning has somewhat shifted from learning which involves some elements of service to service in the process of learning. We thank our professors; in many cases education was a way to achieve a socially significant result,” added Olha Mykhailyshyn.