The research program “Victims of Ukrainian-Polish Confrontation, 1939-1947,” which was presented in Kyiv on 26 April, will reveal the exact number of victims of confrontation and name them all. The program is based at the UCU Center of Research on Ukrainian-Polish-Slovak Borders and the research program “20th Century Ukraine” of UCU’s Humanities Faculty. 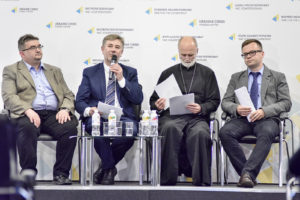 “The center of attention of this project is the person. Though this is not simple, we have come to the understanding that we need to proceed from statistics to the person. This project will bring up themes which are not hidden, but by using a methodology which searches for each person by name and determines family connections. This project operates on the conviction that it’s still not too late to reconstruct a personal mosaic of this period with attention to the person and with attention that turns into prayer,” stated Bishop Borys Gudziak, President of the Ukrainian Catholic University, during a press-briefing at the Ukraine Crisis Media Center.

The project was launched on 1 April and will last four years, possibly continuing for another year. The project will cover territory common to Ukrainian and Polish settlement – Volyn and Halychyna, and also lands now part of Poland. At the first stage, the project will give attention to Ukrainian victims of the confrontation. With the results of the research, lists of names with victims identified will be published in a number of books.