Ruslan Kavatsiuk is a graduate of the Theology Program of UCU’s Faculty of Theology and Philosophy (1999-2004). Two months before the start of the full-scale war, Kavatsiuk and his family finished repairing their home in Hostomel. His family worked on their home for a number of years and invested all their savings in the project. The Russian army destroyed the building, burning it to the ground. The only thing that remained among the ashes was an UCU mug, which for many years travelled with Kavatsiuk from apartment to apartment, and from which he loved to drink coffee in the morning.

“Nothing living remained in my building after the occupation. I went to the place where the kitchen had been. I looked up and my mug with the UCU logo, the one I always drank coffee from, was lying in the ashes of the shelf. We had moved many times, but this was one of not many things which always stayed with me. The mug survived this fire,” explained Kavatsiuk.

Ruslan Kavatsiuk in 2015-2017 was an advisor to the head of the General Command, the head commander of the Armed Forces of Ukraine. Since the first days of the full-scale war, he has been actively helping the army as a volunteer. “American colleagues with whom I once worked got in contact with me. Their organization had collected donations for the army, more than 20 million dollars, bought 1 000 sets of body armor, helmets, individual first-aid kits, tourniquets, etc. Howard Buffett donated $1.5 million. With this, we bought nine buses for the forces of the territorial defense of the Armed Forces of Ukraine: these can transport a whole battalion at one time. I’m now helping them at the headquarters of the forces of territorial defense establish a new institutional structure.”

How Kavatsiuk learned that his home had been destroyed and what lessons Ukrainians should learn from this war, READ FURTHER

How did he learn about the start of the war and the destruction of his home?

“A day before the start of Russia’s full-scale invasion, I was visiting Israel together with Fr. Patrick Desbois, Aleksander Kwaśniewski, and Natan Sharansky. We travelled there to convince the top leaders of Israel – president, minister of foreign affairs, head of parliament – to provide support to Ukraine.

“In Israel, I saw Putin’s speech about recognizing the so-called DPR, LPR [speech of 21 February recognizing the independence of temporarily occupied territories of the Luhansk and Donetsk regions – ed.]. And I understood that very little time remained. I quickly changed my tickets from 28 to 23 February and, a day before the invasion, returned to Ukraine. That was the last flight.’

“The next morning, my family awoke in Hostomel to explosions. We grabbed the children, jumped into the car, and travelled to our parents in western Ukraine. We locked the door. As long as there was electricity in Hostomel, I could check if everything was ok at the building through a security device. Eventually the power went out and I learned from neighbors who had left that the building was destroyed in fighting. The news arrived on my 40th birthday, 29 March. A neighbor sent me a photo from a satellite in which it was clear that our building had been totally burned up.”

“At first I reacted, certainly, like any person in a similar situation; I thought: ‘Praise God we’re all alive.’ Then I understood that this building was the only property our family had. Only two months before the start of the war we paid off our debt on it, finishing remodeling, put in new appliances. All our money went into the house…

“I returned to Hostomel in April, when the Armed Forces of Ukraine pushed the Russians out, but they still were not letting in civilians. Then I first saw my building burned down, trenches in the town. But I was able to enter it only recently, after de-mining. Everything inside was ruined.

“The fire was so strong that it melted all the appliances, wiring, even the radiators. Nothing living remained. I went to the place where the kitchen had been. I looked up and my mug with the UCU logo, the one I always drank coffee from, was lying in the ashes of the shelf. We had moved many times, but this was one of not many things which always stayed with me. The mug survived this fire.”

“In these days, I often recall the Gospel reading: ‘Do not store up for yourselves treasures on earth, where moth and decay destroy, and thieves break in and steal.’ (Matt 6:19) I decided that I needed little to live. But I was sorry about those family items which can’t be replaced: photo albums, the letter of my wife’s great-grandfather from the GULAG, the library which I had long collected. I lost things which I loved very much. When I went into the building, I thought that now none of that remains. But the mug was there. So I took it and will give it to the UCU museum.” 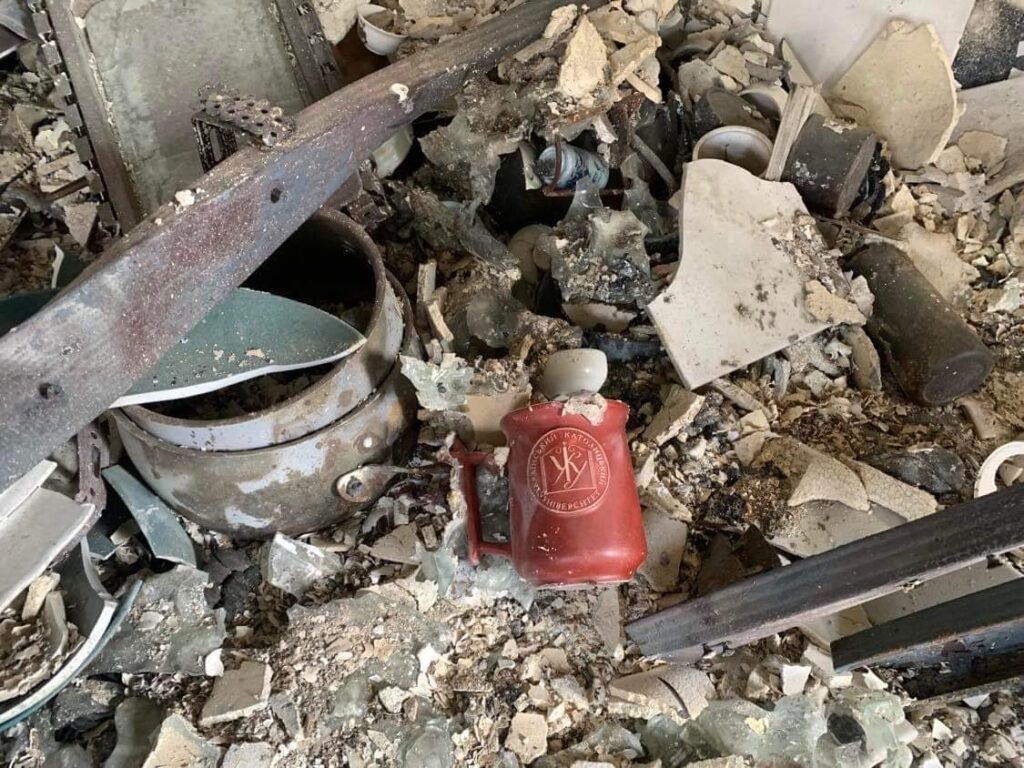 “We came to Hostomel with a delegation with Fr. Patrick Desbois, who has researched genocides for many years. When we were in Israel, I, understanding that war was likely and knowing the Russians, asked Father if he would come to investigate our mass graves. Fr. Patrick promised to come. And so it happened. Their team started investigating the massive crimes of the Russian army against Ukrainians. Together we visited Bucha, Irpin, and Hostomel.

“For the last two and a half years I have studied the Holocaust and the Second World War. A team and I also researched hybrid wars and Russia’s narratives. We noticed how often a Nazi narrative was used. I didn’t know then that the Russians would use this rhetoric as the main basis for invasion. But I understood that this was important history. In the first month of the war, I spoke at all centers researching the Holocaust and genocides. And they all made statements in support of Ukraine.”

Ukrainians have to mature

“When I studied at the Ukrainian Catholic University, it was still not a ‘fashionable’ school. [Kavatsiuk entered UCU’s Faculty of Theology and Philosophy in 1999- ed.] We studied at the old and then fairly-decrepit building on Svientsitskoho Street. [The building has since been renovated- ed.] At first glance, this was not a very prestigious story. But it was valuable. Those things which the majority of countries learn through blood, we learned about through the experience of previous generations. These are the lessons of our history: who we are and who we are not. It is values that, in the long-term perspective, give us the basis for moving forward.”

“We all have to realize that we have been living in this war for a long time: Russia has actively been conducting a war against us for over 15 years, through various instruments. And it will continue to do this, because this is the only thing it knows how to do. So we have to be ready, in various ways, to fight in various roles.

“We have to destroy from inside the Russian culture of aggression, imperial narratives, the idea of their ‘chosen status,’ etc. It is worth destroying this all not from the outside, but with the help of those Russians who are already on our side. Only then will it have a long-term effect.

“It would be worthwhile for Ukrainians to be more aggressive and pro-active, to be mature, to stop waiting for someone from the West to do everything for us. We must take responsibility for ourselves. An example of how we still don’t know how to do this is our lack of activity regarding the Holodomor, because the best books about the Holodomor were written by non-Ukrainians. Don’t we have enough expertise to research this tragedy, to tell the world the truth? As a people who suffered from famine, we have to take a position of leadership: to create initiatives to support countries now suffering from famine, to create international funds which other countries can join. This would be a dignified way to honor our victims of the Holodomor. But we are waiting for everyone to recognize the genocide against us, build monuments, write books. What do we lack to talk about this in an expert way? And there are countless examples like this where we do not take responsibility for ourselves. This is often uncomfortable and thankless work. But it needs to be done.

“With the example of the Russians, Ukrainians should show the world that evil cannot go unpunished. Russia is a source of terrible evil which for hundreds of years has been absolutely unpunished. God has called us to this mission, to set the Russians in their place. I am not certain that we are ready for this mission. But we have to get ready and do it, because we have no other choice.”