Every year for a few days Davos becomes the political and economic center of the world. There at the World Economic Forum leaders of leading international companies get acquainted with,
talk over, and sign multimillion contracts. Pavlo Bryliak, an 18-year- old graduate of the Ukrainian Leadership Academy and a first-year student at the bachelor’s program in IT and business analytics of UCU’s Faculty of Applied Sciences, saw all this. He became one of six volunteers from Ukraine in the Ukraine House in Davos. 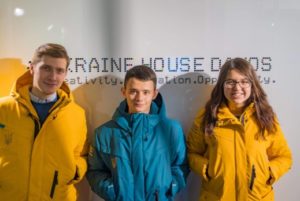 – How did you end up at the World Economic Forum?

– In my case, it helped that I had studied at the Academy of Leadership. The Western NIS Enterprise Fund, which was a partner and co-organizer of the Ukraine House in Davos, asked the Academy of Leadership to choose three of its graduates to volunteer at Davos. This required writing an essay on the theme: “My vision of Ukraine 2030,” a motivational letter “Why I want to travel to the forum,” and sending a resume.

Then there were two rounds of interviews: the first, to test your knowledge of English and key questions about Ukraine; the second, speaking with a representative of the fund about your motivation to travel to the forum in Davos. I explained that in the future I see myself as a specialist in the field of economics. In order to achieve this goal, I need to take many important steps, and participation in the economic forum would enable me to strengthen the knowledge I am acquiring at UCU’s IT and business analytics program.

Two days later, the results were announced. I then learned that I was accepted and would soon travel to Davos together with five other volunteers from Ukraine. 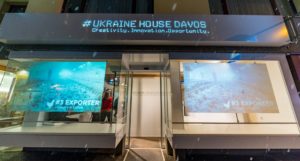 – What was the role of volunteers at the forum?

–We helped the team of organizers in many moments connected with the functioning of the Ukraine House. So our main function was working together with the hosts.

The volunteer is the first person whom visitors, potential investors, saw at the entrance to the Ukraine House, which was located in a small Timberland store. So the first impression depended on our hospitality. It’s interesting that directly across from the Ukraine House was the Russian one, and everyone talked about the fact that smiling young men and women stood at the entrance to our house, but near the Russian one were guards with serious faces who were constantly looking out for some danger. This fact, obviously, worked in Ukraine’s interest. 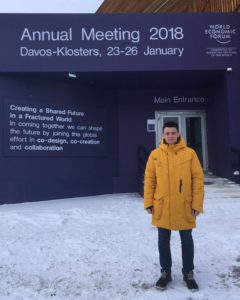 –Explain about the forum’s level of organization. What was surprising?

–Of course everything was at the highest level, but particular attention was turned to security methods. For example, there were no trash cans at the forum, because, in the opinion of the organizers, potential threat would be possible. So a special company came in to take out garbage.

–What was the goal of the Ukraine House?

–Many countries with participants at the forum had “buildings,” the goal of which was to represent the countries in the international arena. The Ukraine House, which this year had the motto “Creativity. Innovation. Opportunity,” was organized by investors and Ukrainian businesses which have their own successful businesses in Ukraine. Eventually, fairly many successful Ukrainians spent time at the Ukraine House and made significant efforts to create a positive impression of our country by way of regular communication and openness. In general, the Ukraine House was supposed to show not problems but possibilities and Ukraine’s best achievements, which would attract investors. In our “house” various panel discussions were held. Each was presented by a different company, depending on the theme.

There were also discussions sponsored by the Havrylyshyn Family Fund, where the ideas and figure of Bohdan Havrylyshyn, a Ukrainian who was one of those thanks to whom the economic forum in Davos arose, were discussed.

There was a break after each discussion: guests drank coffee and got acquainted and conversed in a relaxed atmosphere. The Ukraine House was always full of people. Approximately 5 thousand people visited us, though only 1 thousand were registered. 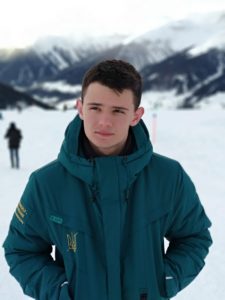 – Did you see some famous people?

– All the streets of Davos were full of the pavilions of famous companies like Google, Facebook, “The Wall Street Journal”… And so all the participants of the forum were very famous and influential persons in various fields of activities. I got acquainted with two staff members of “The Economist” and saw James Cameron, Angela Merkel, and Petro Poroshenko, who also visited the Ukraine House.

–What are your personal discoveries/impressions after volunteering at the economic forum?

–The atmosphere at the forum in Davos was truly inspiring and it absolutely increased my motivation to work. I also understood that famous people, who have earned millions of dollars, are not isolated and unapproachable, as many think, but very simple and open. When you see that every other person walking near you is the CEO of a leading world company, you understand that you also can achieve such success with the necessary motivation.

And I also noticed that very many influential people and international organizations support Ukraine. They consider Ukrainian workers very qualified and that our country has a great future.
They also asked me about Ukraine, where I study and how I became a volunteer at Davos. I explained that I’m a first-year student in the IT and business analytics program at UCU’s Faculty
of Applied Sciences. Many knew about UCU but were surprised that there is such a specialization at a Ukrainian university. 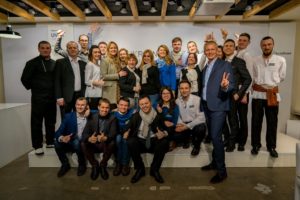 –You said that any goal is possible with good motivation. What would you advise students who still don’t have what they need?

–It’s necessary to look for a good environment. When you see people around you who are always working and developing their competencies in certain fields, that’s motivating. Before entering UCU’s Faculty of Applied Sciences, I had no active work in mathematics, no early practice in programming, but I started to study these areas very intensively and received significant knowledge. That is, I ended up in an environment which is nurturing and encourages you to set high goals and form a roadmap to achieve them. So I am not now limited by study and I regularly get involved with various projects and initiatives.