Today many activities at the Ukrainian Catholic University are dedicated to strategic planning and developing our university as a spiritual-educational, business-innovational, and cultural center. However, in planning future steps, it is sometimes worthwhile to take a look back and see the path already taken, from a historical perspective.

So, looking at the path taken, we recorded a short discussion with a scholar and doctor of theology, Mykhailo Petrovych. The figure of Mykhailo Petrovych is unique in the history of the university because he was the first director and one of the founders of the Library of the Lviv Theological Academy (now the Ukrainian Catholic University). 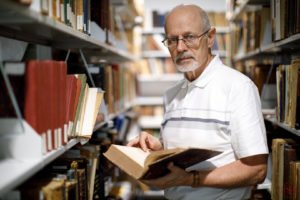 – So, Mr. Petrovych, it is expected that the first question will relate to the history of creating our library, no official version or small house secrets, but your personal recollections: How was the UCU Library created? At least in brief: What were your first steps? What difficulties did you face at the initial stage of forming the library? Or were there no difficulties?

– At the start of the ‘90s, the seminary and Theological Academy were revived in Lviv, and I came here to teach theology, because at that time we didn’t have enough teachers for the instructional process. Soon, Mykhailo Dymyd, then the rector of the Lviv Theological Academy on Kleparivska Street, the premises of a former daycare center, invited me to a large room where many boxes stood and said: “Mykhailo, our library needs to be here. Can you take care of creating our book collection?” I agreed, started looking for helpers, and created the collection from zero. Eventually, premises at the building on I. Sventsitskoho Street were given for the library. But at that time at the start there were holes in the floor and, together with the workmen, we repaired the premises, even getting involved in furnishing the library. The premises of the library on Sventsitskoho were relatively small, but the collection had increased. So it was necessary in a small space to place as many books as possible, preparing a cozy place for readers. I myself also made sketches of bookshelves, with maximal room for books. Stores didn’t have these at the time. Then I went to factories, in particular to the bus factory, to order these furnishings for the library.

– Though today the Ukrainian Catholic University, it could be said, is one of the hallmarks of Lviv, how easy was it to integrate into the city’s environment at the start of its existence? 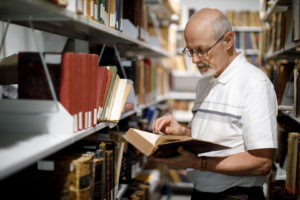 – Mr. Petrovych, please talk about the conditions under which the rare books and special collections were created. I know that you started these.

– In parallel with work at the library, I was involved in scholarly work, so I understood that the formation of specialists in theology and philosophy, finally, the modern person, not only scholars, is not possible without fostering the culture of the book.

Also, benefactors, philanthropists, and guests donated many rare books to us. In addition, I tried, as possible, to acquire old printed books for the library, which would be useful for our community. Later, I was fortunate to become acquainted with Bohdan, whose last name, unfortunately, I can’t recall. He was a cantor’s son. He himself in childhood served at the altar in church. He also knew from childhood about old printed books. In Soviet times, he gathered and preserved from destruction a fairly large collection of old printed books. He considered this the task of his life. His collection numbered approximately 50 items. He himself bound them and restored them as he was able, in an amateur way, of course, but with such a love of books! I bought from him the library’s first old printed books. Very soon after our acquaintanceship, Bohdan passed into eternity, but his wife approached me, asking me to acquire this collection for the library, so that it would not be dispersed. I agreed, and with the support of Mykhailo Dymyd and Borys Gudziak, we found financing to purchase this collection. This is now the jewel of the collection. 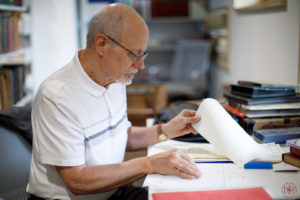 –The next question about the collection: How did such a large amount of archives and artifacts from abroad end up at the Ukrainian Catholic University?

– We gradually worked together with various kinds of libraries: university, public, and also with publishing houses and bookstores.

I recall with great gratitude the wonderful library of the Jesuit Fathers in Krakow. They gave our library a very large amount of books from their reserve fund, generally in Polish and English. But this was above all educational literature. We also quickly managed to establish cooperation with France, Britain, and Germany. We truly devoted great attention and made efforts to develop such cooperation with European libraries.

In this we worked together not only with publishing houses and bookstores but also with the diaspora, collectors, etc. For example, in this way we found out that the collection of Hans-Georg Beck, a noted scholar of world-class reputation, was to be exhibited. We were able to acquire this collection for the library, and this book collection eventually formed the basis for the wider thematic collection now known as KLAVIS.

The geography of cooperation also expanded when information about the Lviv Theological Academy (later the Ukrainian Catholic University) spread more throughout Europe. They already knew us then, and many collections of scholarly and cultural activists, not only from the diaspora, were donated to us. We traveled abroad to gather these collections, meeting donors, preparing the packet of documents that would be necessary to transport them. Eventually, the amount of donated books, archives, and collections, from Europe, Canada, and the USA grew significantly. Now they send them by post or with the help of other services.

But yes, at the beginning it was complicated. I would guess that there were few libraries in Lviv at that time that received additions to their funds from abroad in such number and so systematically. 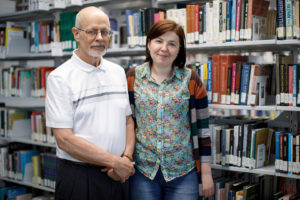 – You eventually left the library. What projects now have the greatest priority for you?

-During the whole time of my work at the library I was very divided, because I wanted to devote more time to scholarly studies in theology. And when Borys Gudziak offered me an opportunity to work on my doctorate in Canada, after long reflection and hesitation, I agreed. The scholar in me conquered the library director. Still, the decision was not at all easy to make. Now I live in Chicago. I’m involved in scholarly studies. Recently the project for a future monograph of mine was presented at the Faculty of Theology and Philosophy of the Ukrainian Catholic University. I hope to publish this work soon. I also have certain plans for scholarly studies. Time does not stand still. And the library will always be in my heart!