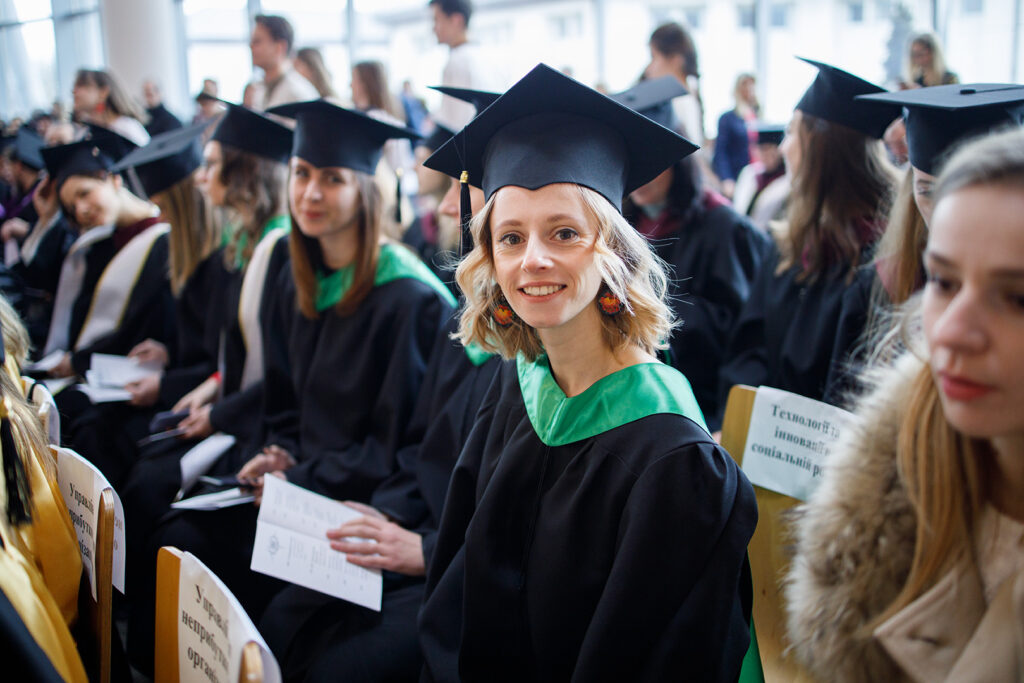 After putting on their gowns, the happy graduates, along with their parents, teachers, deans, and department leaders, went to the University Church to start the celebration with the Divine Liturgy, headed by UCU graduate and the youngest Catholic bishop in the world, Stepan Sus. 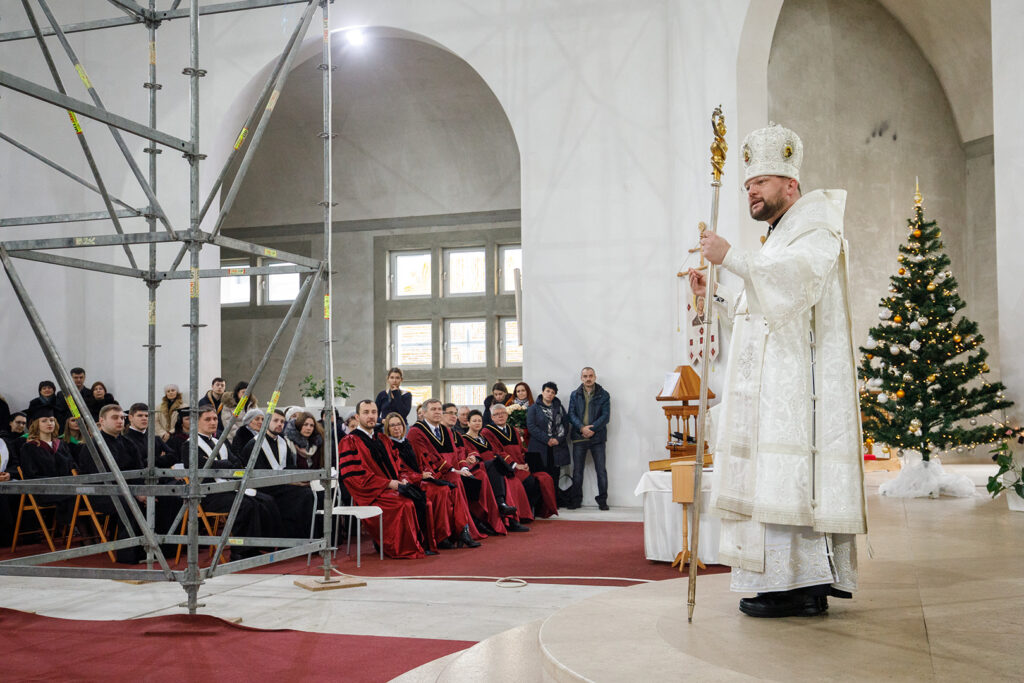 “Today, leaving these walls, you are already different,” he said to the graduates. “This is the vocation of UCU: to make people different, better, capable of something special. There will be times in your life when you doubt the choice you made; situations where diplomas can mean little, but you need to take charge and give the right answers to life’s challenges. In these circumstances, do not be afraid to look again at the diploma you will receive today. 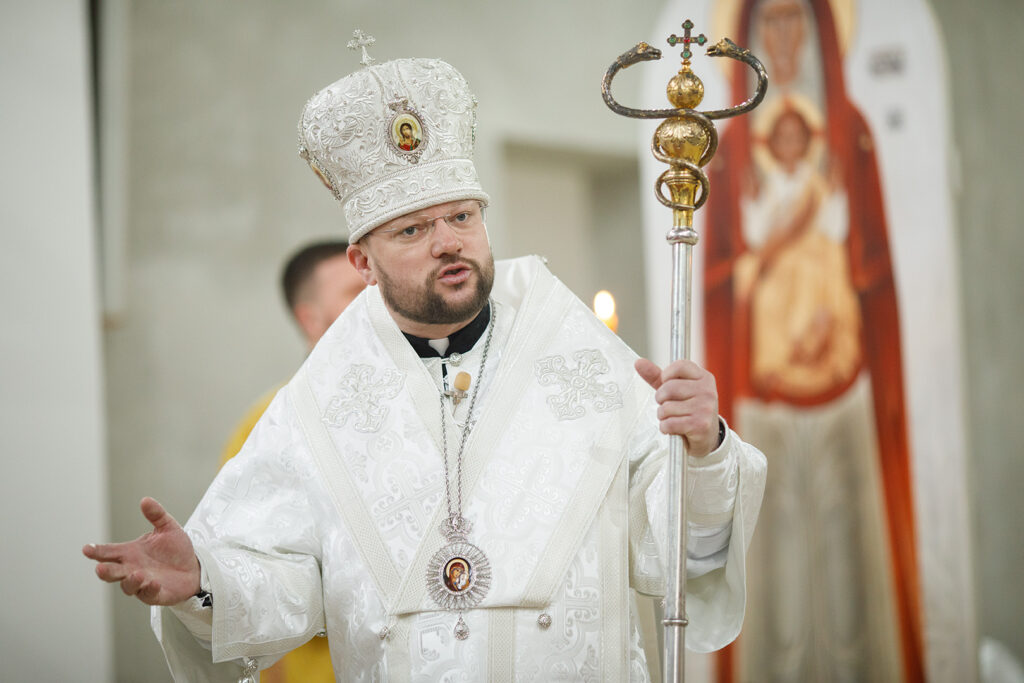 “See what it says: Ukrainian Catholic University. This should encourage you. Don’t be afraid to go forward, don’t be afraid of others. Be proud that God has given us the opportunity and the chance to be educated at UCU,” said UCU graduate Bishop Stepan Sus. 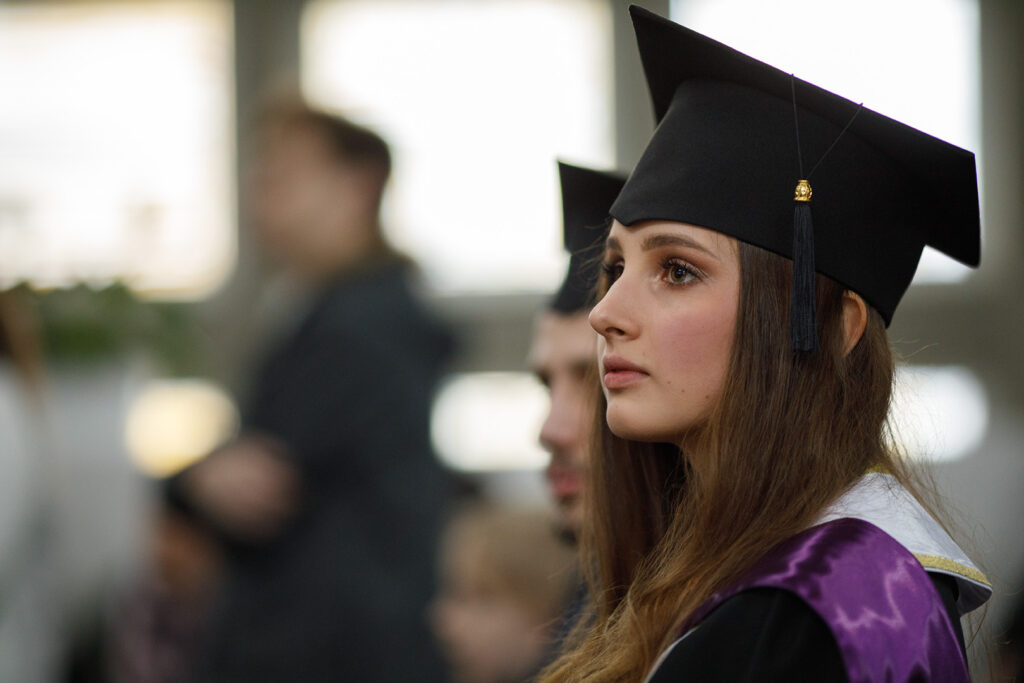 At the conclusion of the Liturgy, the line of graduates processed to the refectory, where a live broadcast began and the orchestra played Ukrainian carols. 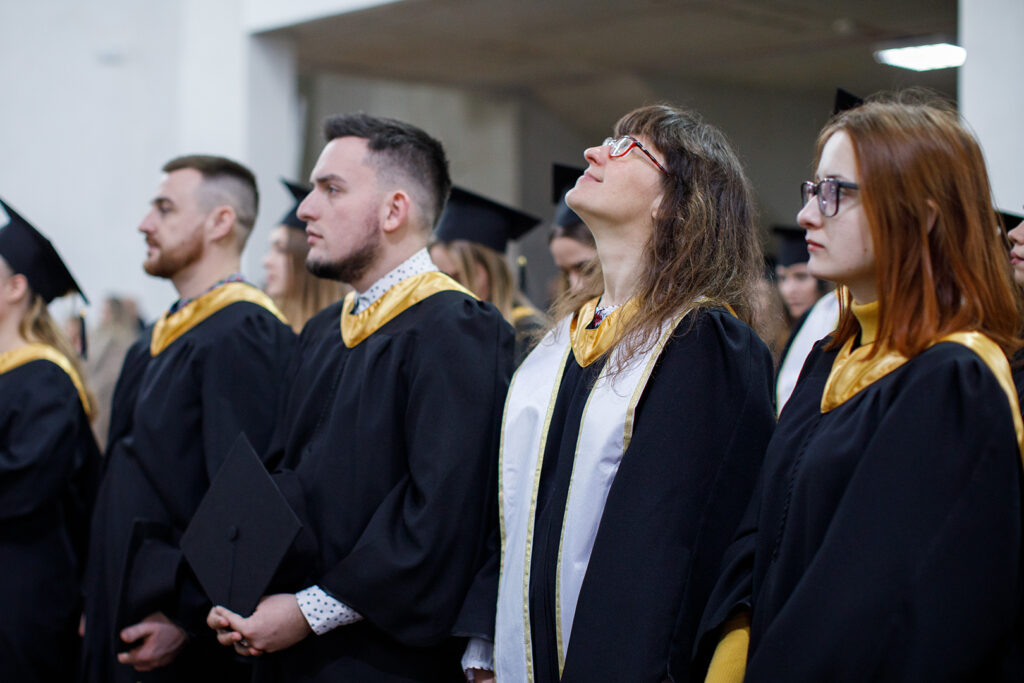 With the prayer “O, Heavenly King” and the Ukrainian anthem, the second part of the festivities began. Some graduates greeted the audience, and UCU Rector Fr. Bohdan Prach and Fr. Ihor Boyko, Rector of Holy Spirit Seminary, also addressed those in attendance. 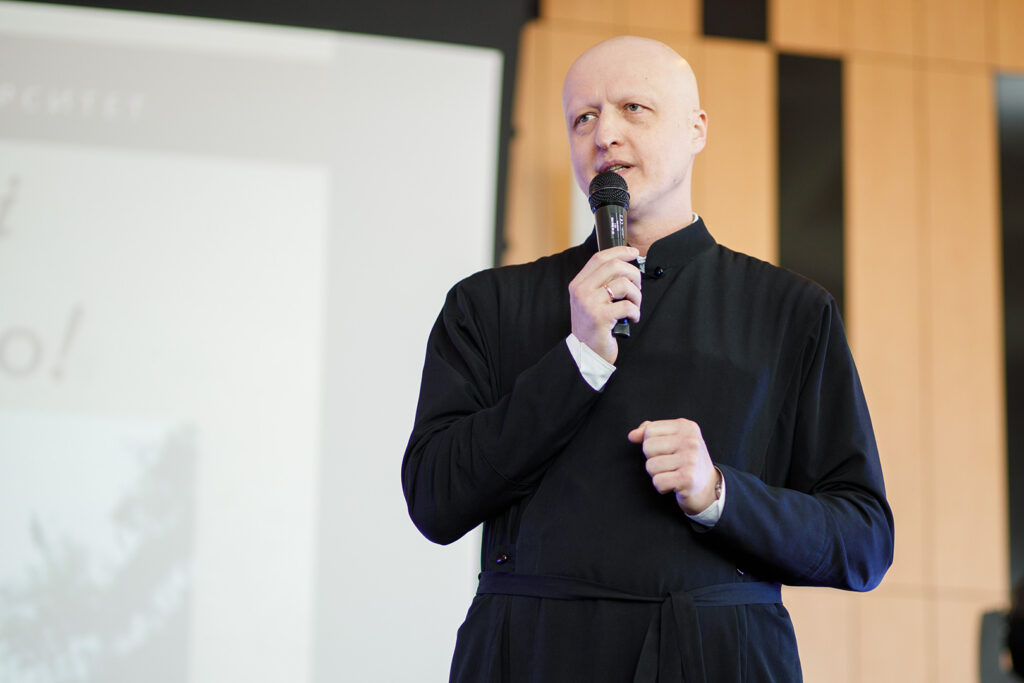 “Don’t be afraid to seek the truth and seek God,” Fr. Bohdan Prach encouraged the graduates to continue their path of service. “Don’t be afraid of challenges, even when they seem to frighten you. The Lord always gives us enough strength to meet those challenges. We will always be with you; come back to us whether mentally or physically, as often as you can. Our doors are always open. We are always here.” 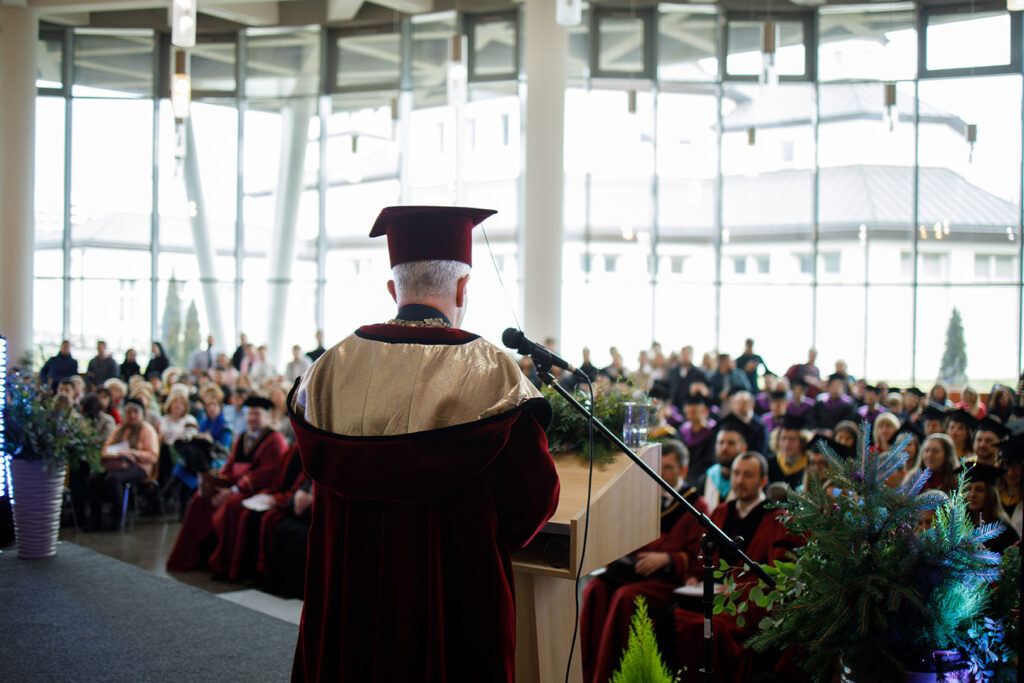 This year, the motivational speech was delivered by a friend of the university, Stephen Russo, Director WW Cognitive City Solutions IoT at IBM, who was introduced by Yaroslav Prytula, Dean of the Faculty of Applied Sciences. 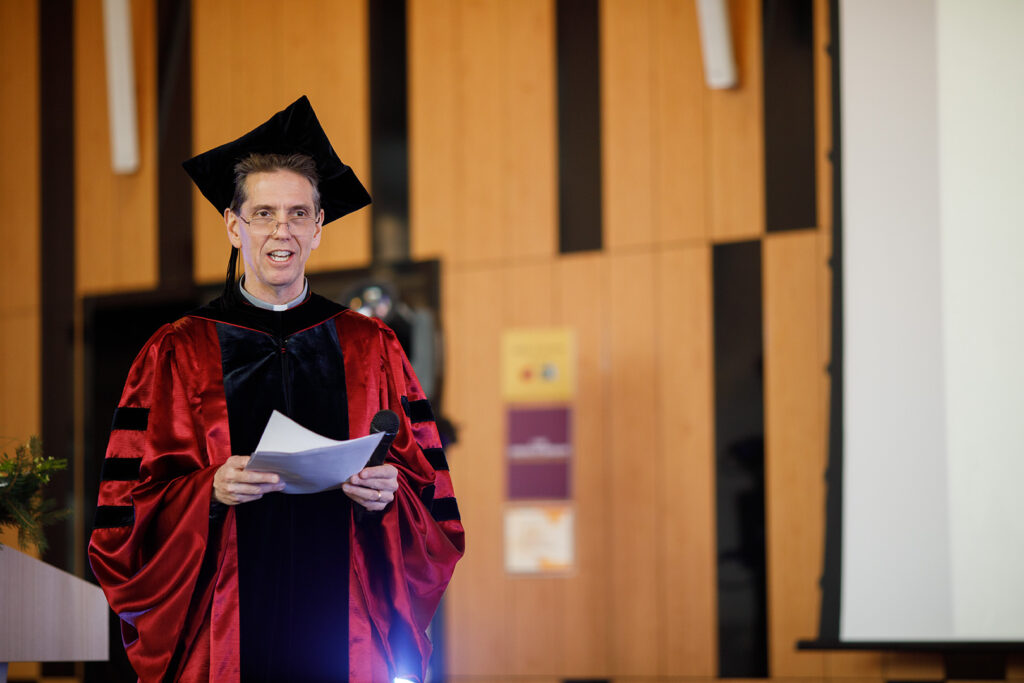 The invited speaker spoke to the graduates explaining the metaphor of the “Survival Tree,” referring to a tree that burned during the Sept. 11 terrorist attack but survived through attention and care: “It was badly damaged, its branches broken and burned and its roots torn off and covered with tons of debris. And yet, on one of the branches workers noticed several young leaves. The crippled tree fought for life! It was transplanted, provided with water, nutrients and sunlight … The following spring, a dove built its nest on new branches. This seemed like a sign. The tree has returned home to Ground Zero, where it is growing and flourishing today. It is known as the Survival Tree, as it withstood all its trials and began to flourish! “ 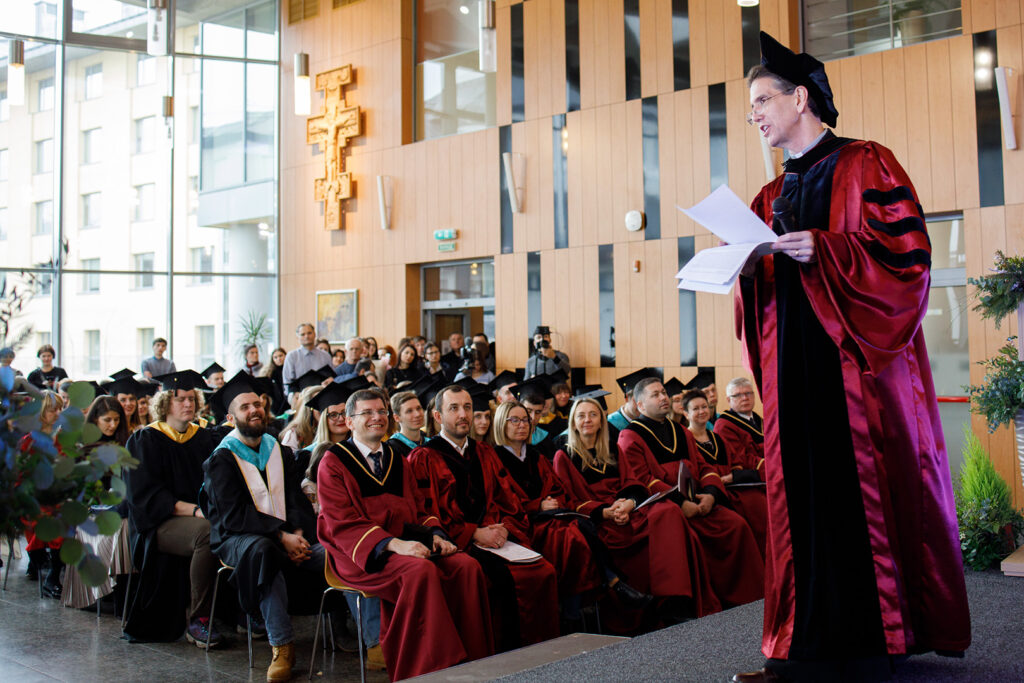 “UCU has given you the opportunity to grow on fertile soil, where your mind, heart and faith have been nurtured,” he continued. “As you think about your own goals, think about how to plant the seeds of your knowledge and experience. How do you multiply and return the gifts you receive? How can you truly change the world?” 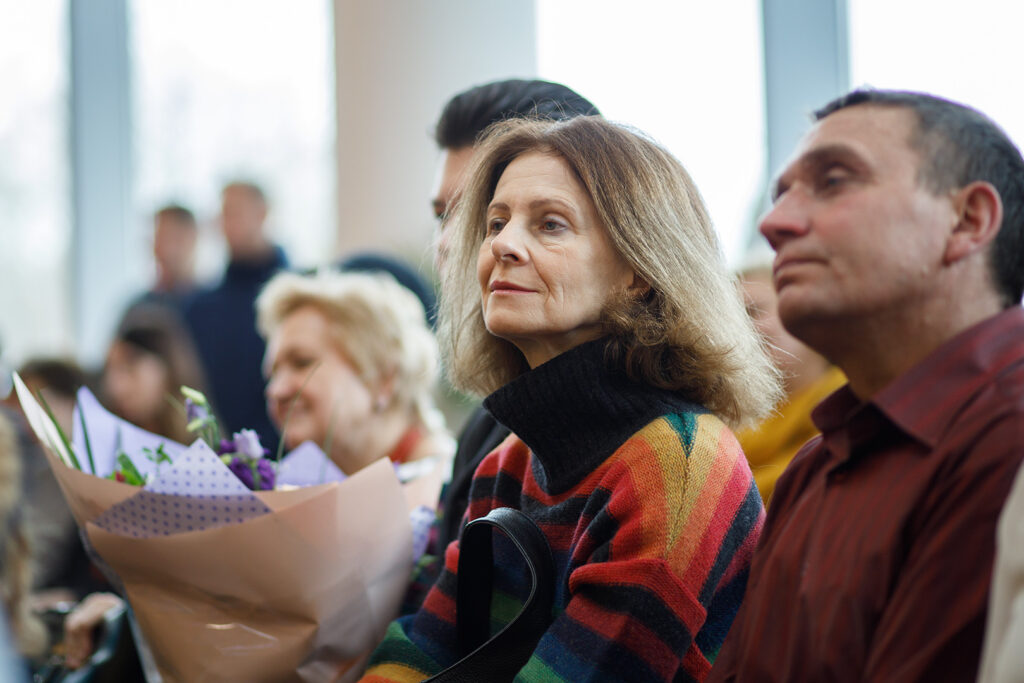 At the end, Stephen Russo gave the graduates some advice and emphasized: “And most importantly: never forget your CREATOR! Pray, and as the dove nested on the Survival Tree, so the Holy Spirit will dwell in your branches!”

This year, Natalia Datchenko, a graduate of the Master’s Program in Innovation and Technology in Social Work, was named Valedictorian 2020. In her speech, Natalia told about her educational and life path, from political science and management to social work and service: “I felt that I lacked knowledge for further growth, namely, a deep understanding of human weakness and needs, as well as the ability of local communities to respond to these needs. “ 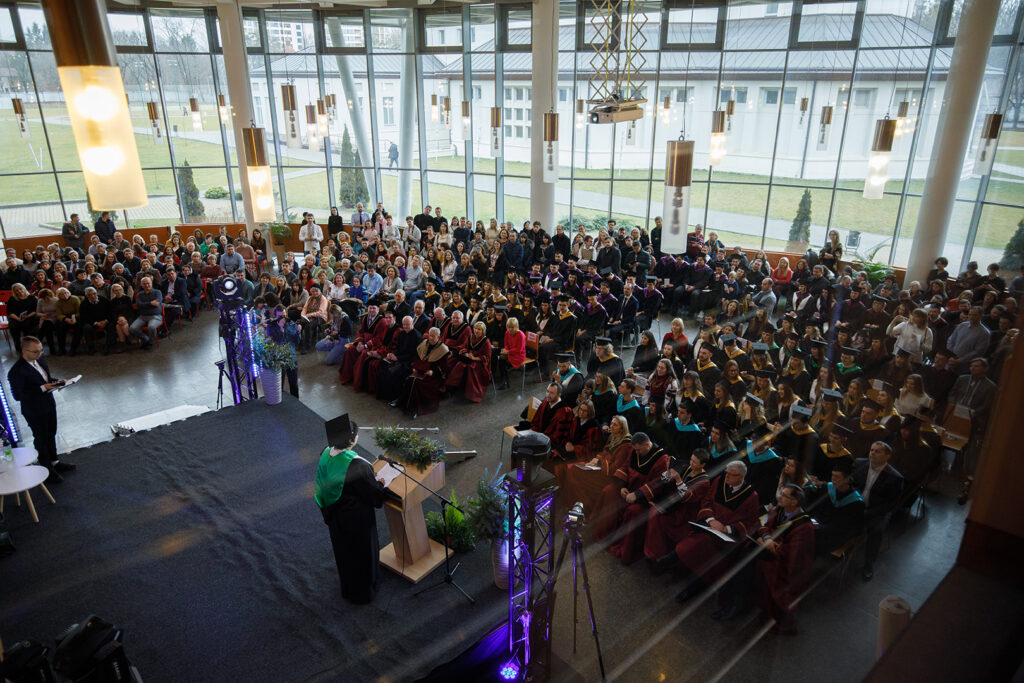 According to the graduate, UCU is based on the values ​​of trust, openness and subsidiarity, which is what Natalia Datchenko defines as a major contribution to her professional position: “The conditions in which we studied made me personally feel deeply grateful and respectful of the people who created this university, who made it modern and welcoming, without special government support and budgetary funds. I have something to compare, so I can bravely call UCU a Ukrainian miracle.” 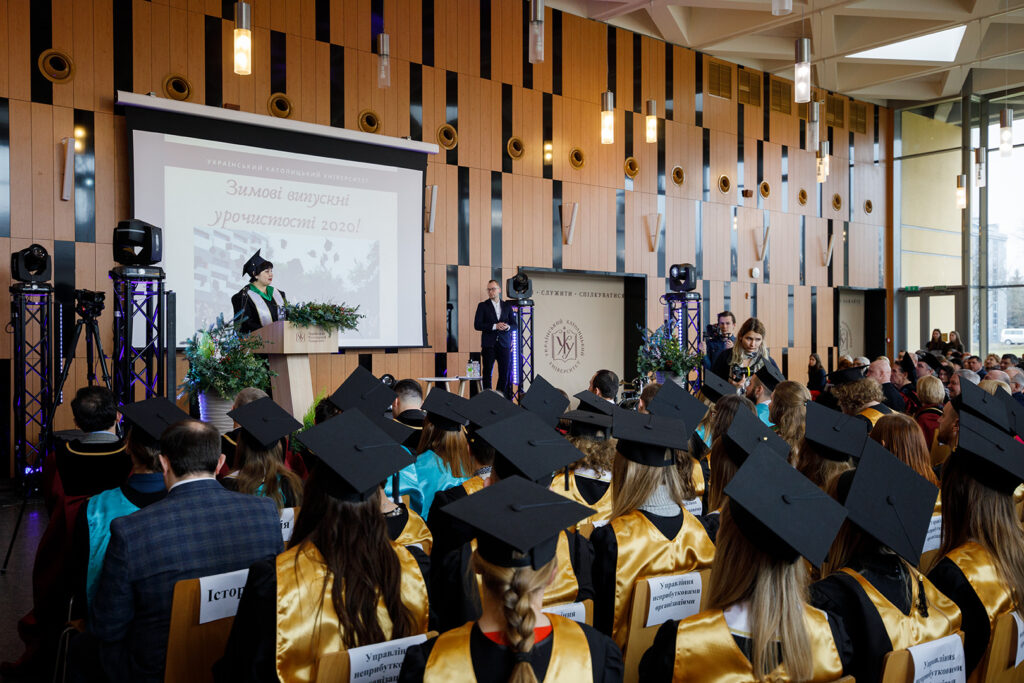 “I was fortunate to get a job at the United Nations. I always dreamed of this,” said the graduate.” It was at the UN that I felt the true meaning of social work as a mission. Working there, I became completely financially independent and professionally fulfilled. I was mistaken in my assumptions about the inferiority of social work, and this understanding had to mature,” admitted the graduate. 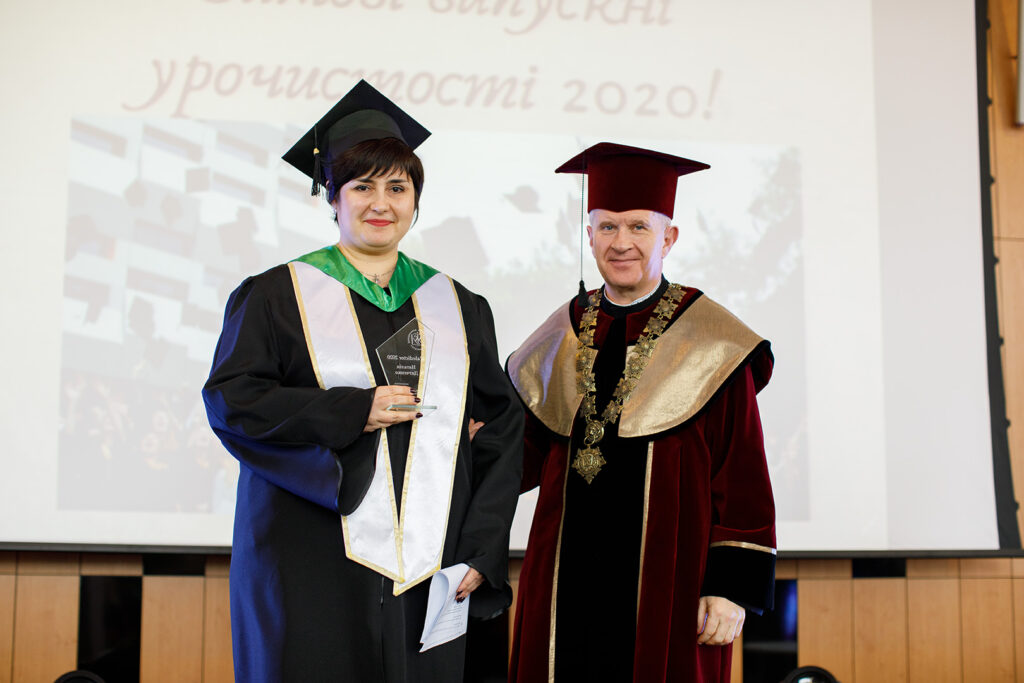 And one of the soft skills that UCU forms in college students is the ability to dream and consistently work on their goals.

Daria Reznyk, a graduate of the Master’s Program in History and Archeology, said that she entered UCU for a master’s degree, because she was sure that she would be able to come closer to her dream here. And she was not mistaken. “My dream is to become a prominent scholar,” she said, “and my first encounter with UCU was during a scholarly conference.” 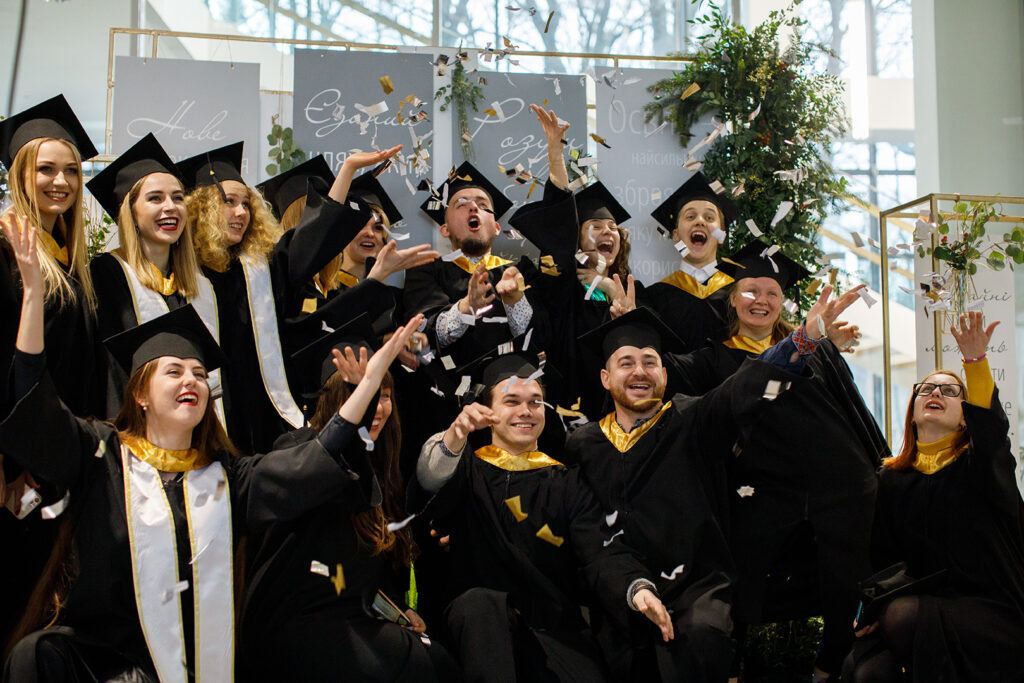 “At the time, I was studying in my third-year as an undergraduate at another university, and, having seen a huge library and met with prominent professors whose work I had already studied, I realized that I wanted to study here. Over the course of a year and a half, I have participated in several conferences, participated in a scholarly internship, and was able to change priorities and broaden my scholarly interests.” 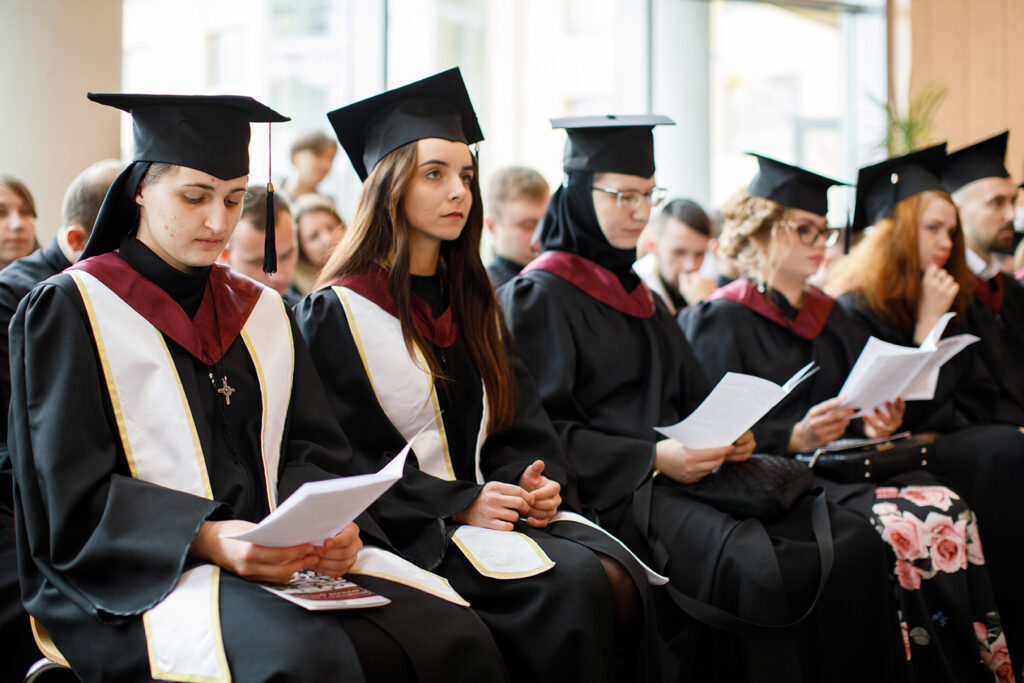 Andriy Kurochkin has just completed his Master’s Degree in Data Science. He said training was not easy, so he is proud he was able to complete it successfully. Andriy talks about his dreams. In particular, he wants to devote time to studying sociology with the use of big data: “This industry is narrow, but it has great potential, which is why I would like to do it. I also have a dream to teach, to share the experience that I have already accumulated, because I worked before and during my studies,” the graduate added. 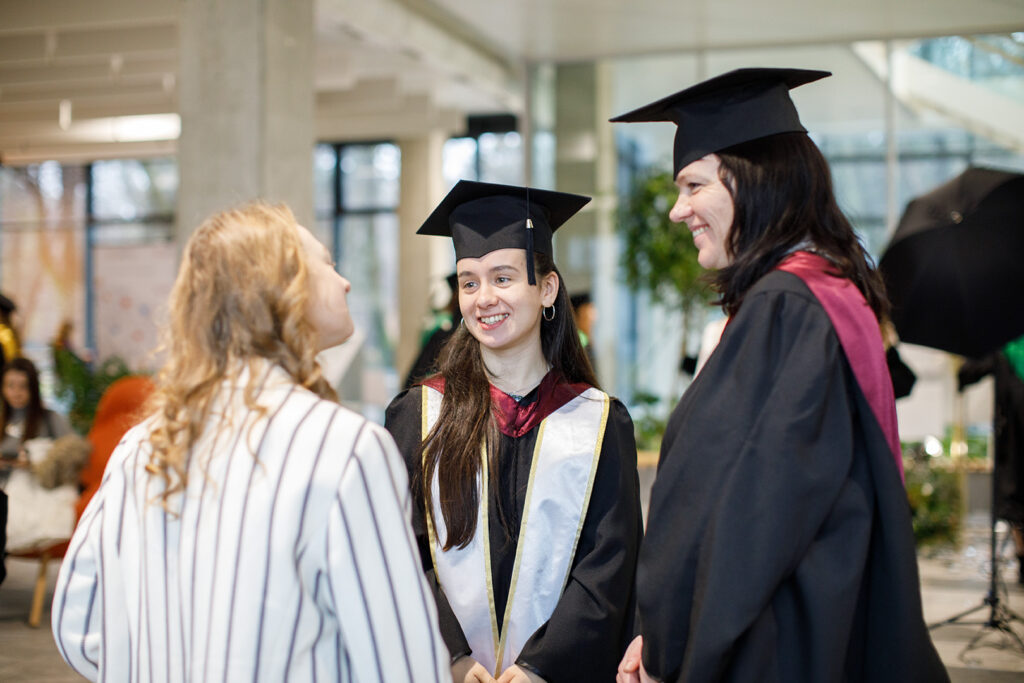 “In addition to my internships and major projects, I also worked at UCU during my studies – and I consider myself a success with the projects that I can do and can do much better now – thanks to the education I received. I also found friends and confidence here – both as a person and as a professional.” So a graduate of the Master’s Program in Nonprofit Organizations Management and the head of projects and programs of the UCU Recruitment Division, Ostap Machinski, shared the major achievements of his studies at UCU. 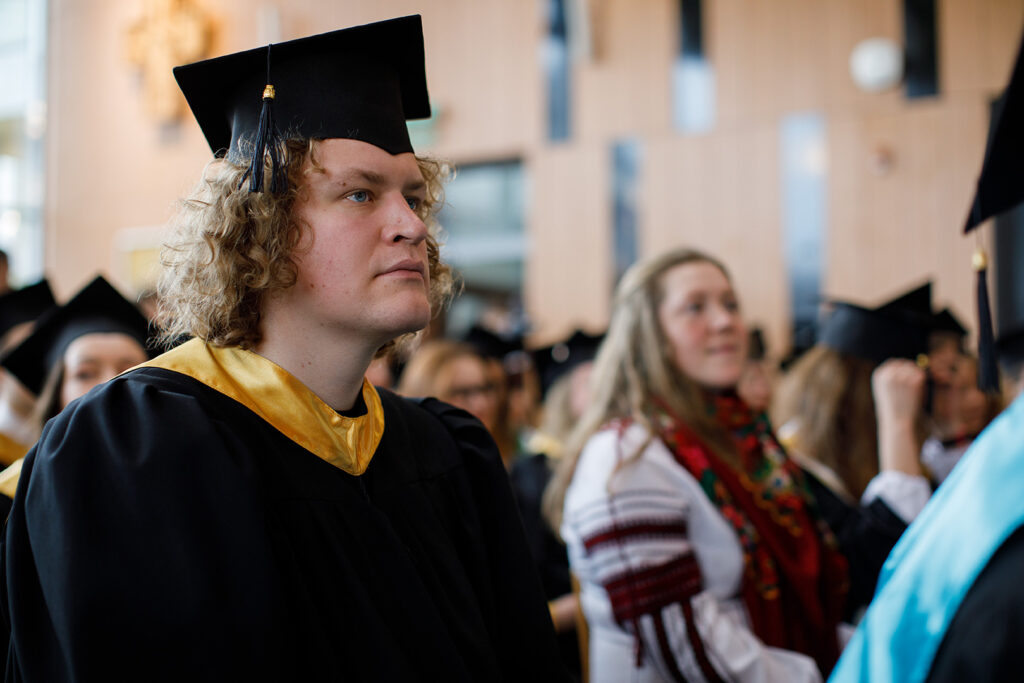 Speech on behalf of the Alumni Association 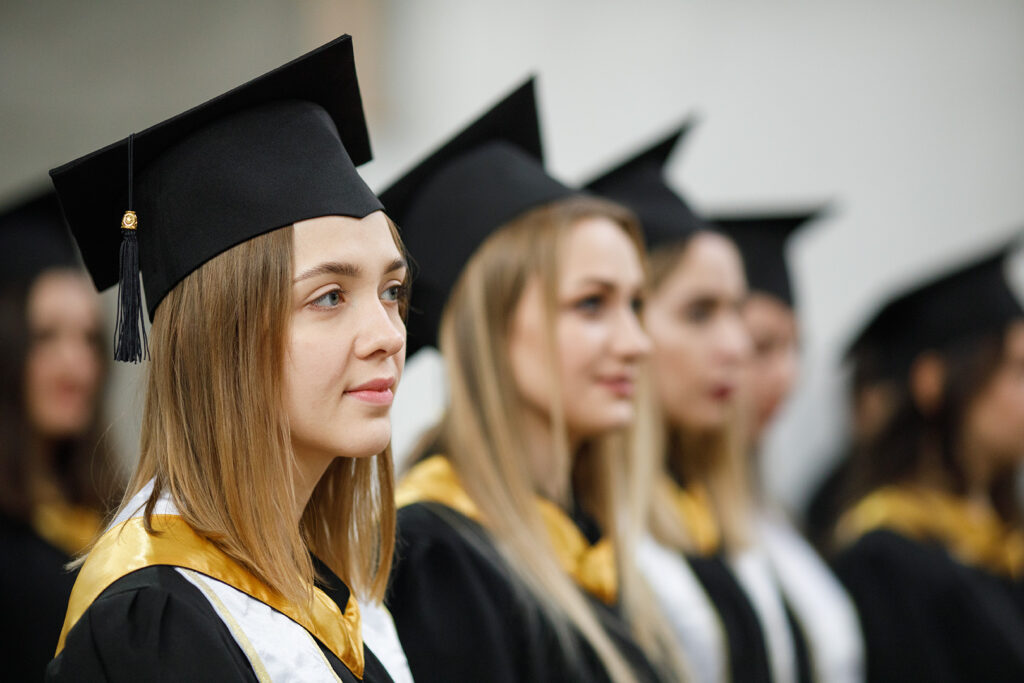 “And finally, they both have some kind of inner magic: no matter where you come from, whether you work, teach or study, whether you are a metropolitan or just a friend of ours, everyone here is united by the community. It is a great privilege that will always help you, if necessary, but it is also a responsibility: Will UCU become a community for a few years or a family for all your life?” Roman Nazarenko summed up. 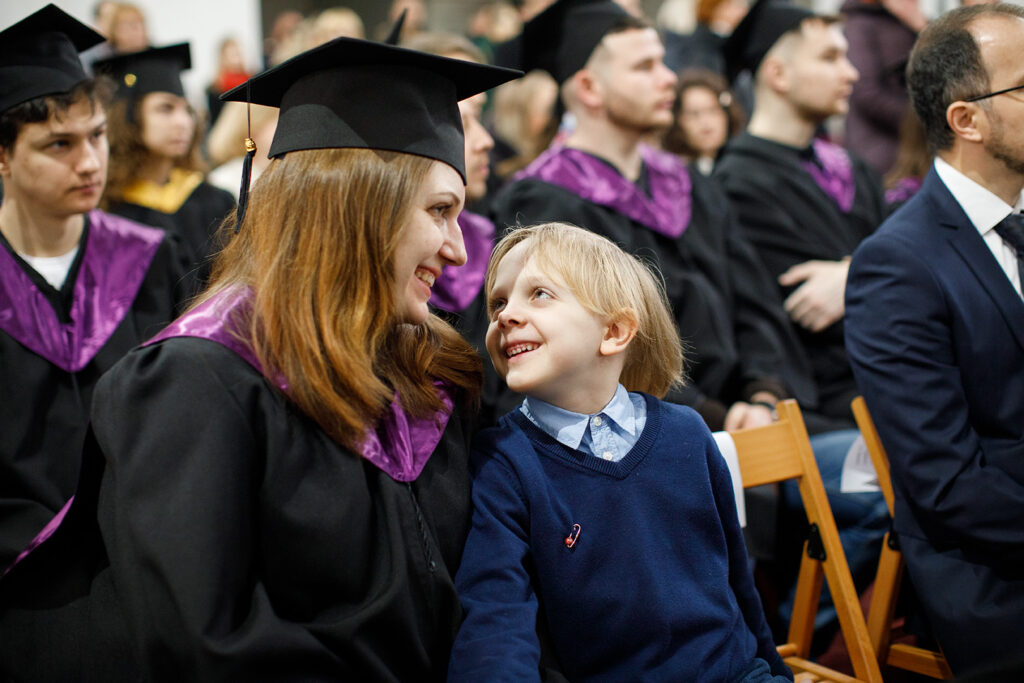 After the blessing of Father Rector, prayer, and the traditional group photo, the graduates, parents, and teachers by faculty had refreshments.