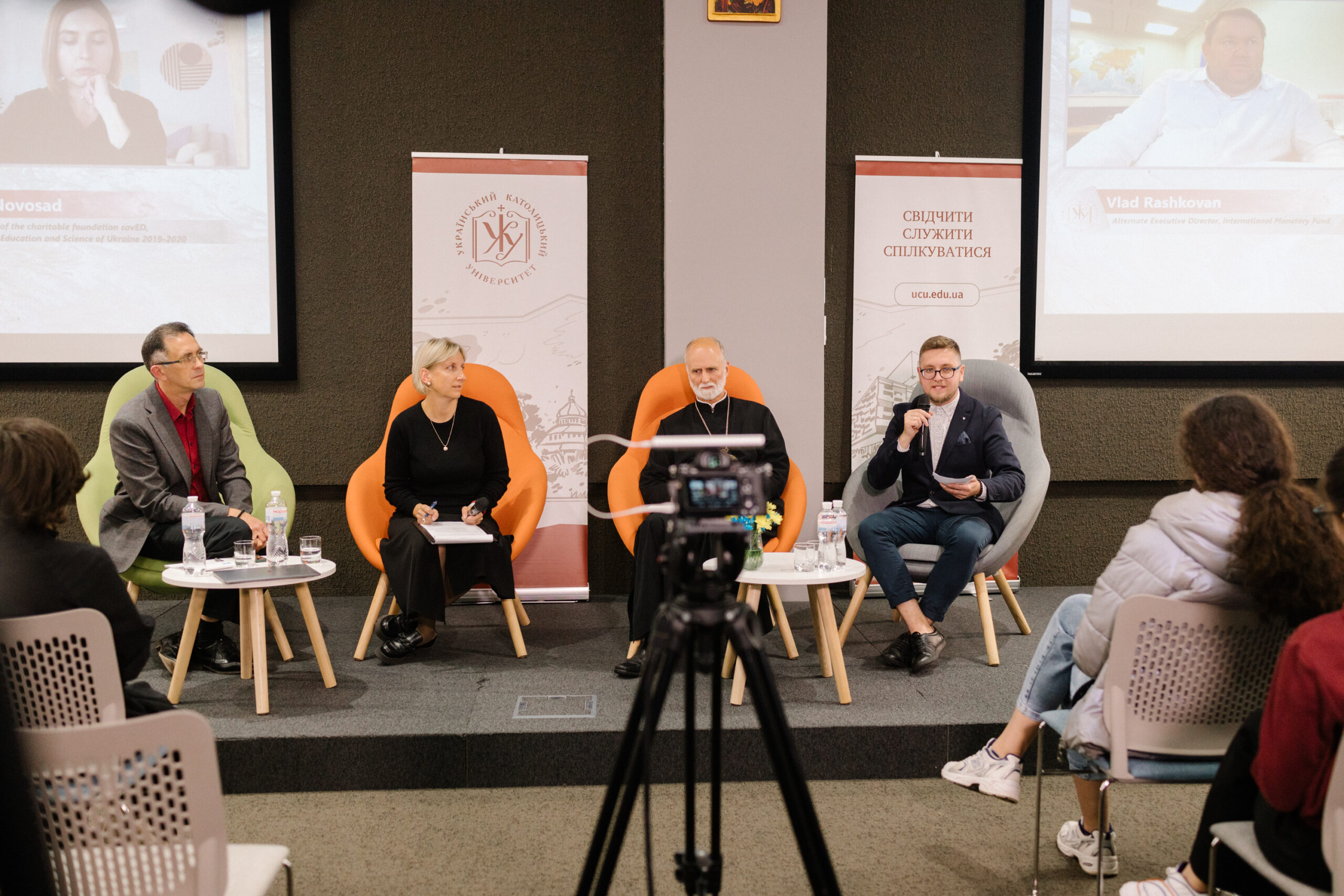 The recovery and post-war transformation of Ukraine will be a complex and lasting process. The power of international solidarity we experienced during the war should empower us in establishing a sustainable model for Ukraine’s development for the years to come. It requires commitments, partnerships and efforts from many local, national, and global players now. What is the role of human capital in the recovery? Can Ukraine become a global platform for innovations in establishing itself as a country with a vibrant social, economical, cultural, and political life? The panelists discussed these complex issues during  UCU Days.

Watch the recording of the discussion on the UСU YouTube channel 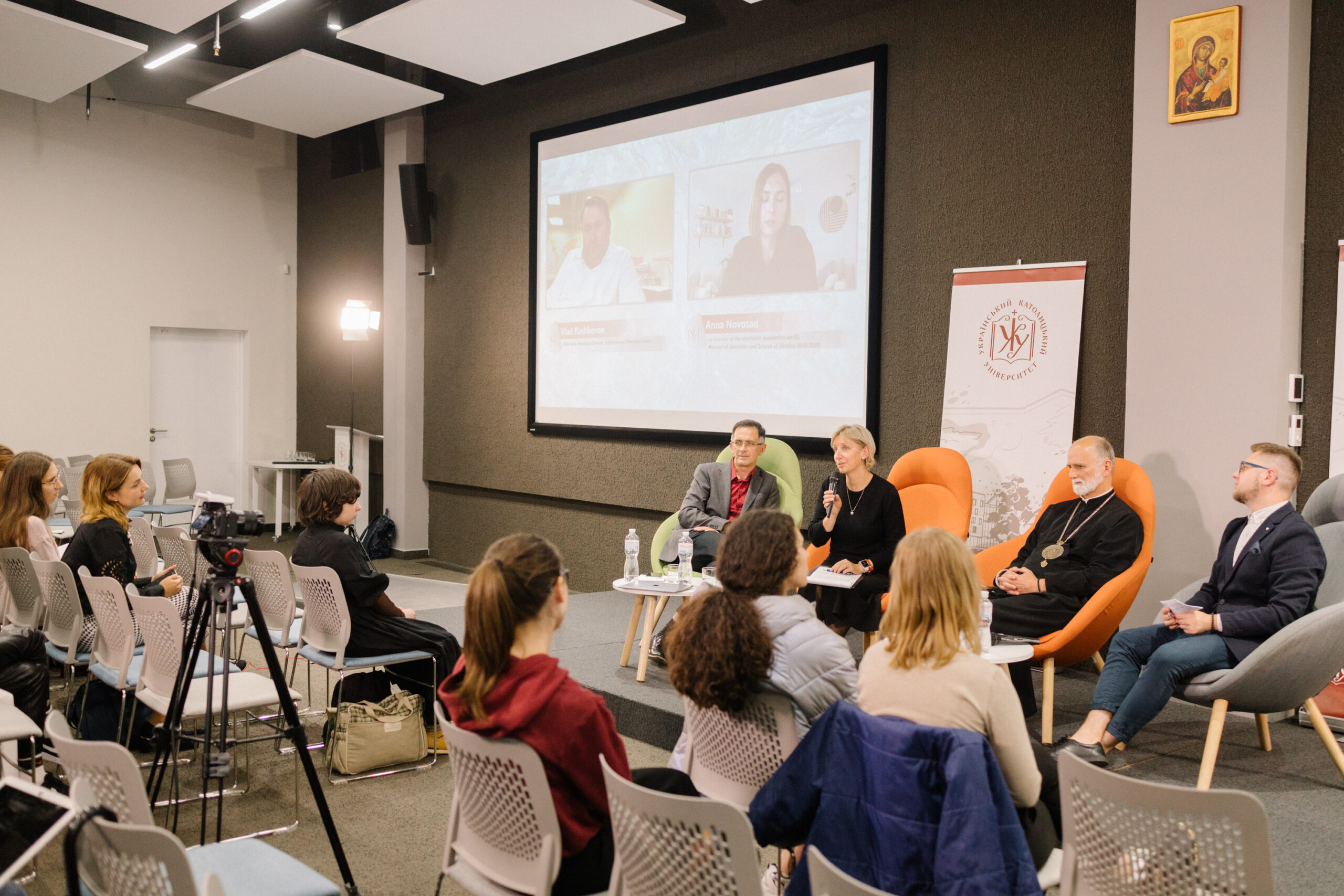 What and how should we build? – Dmytro Sherengovsky, UCU Vice-Rector for Academic Affairs and Internationalization, sees a great perspective for the Ukrainian recovery in social solidarity, the design, and the implementation of new solutions that imply conceptual, process, product, or organizational change. Referring to the OECD, Dmytro states that “To tap the potential of social innovation, an enabling policy framework is needed to support public, non-profit and private actors to co-construct and implement socially innovative solutions and thereby contribute to address socio-economic issues, build stronger territorial resilience and better respond to future shocks.” Looking back to the previous 6 months of our war experience, he also highlighted at least three ideas that were already tested and seem to be efficient: bottom-up approach, networking, and putting resources where they are needed.

Anna Novosad: “It’s not only war against Ukrainians. It’s a very bloody war against our schools, kindergartens, and universities. Russians do it based on very ideological reasons. We see it on occupied territories, where they burn Ukrainian books. They put down the portraits of our heroes, poets and then put up a portrait of Lenin. I think the international community failed completely in researching how Russia has been ideolaging and weaponsing  education for decades, teaching their kids how to hate Ukrainians and other nations that are inside Russia. Education played a huge role in the cause of this war, because it got so ideologies in russia itself.

We have a huge number of schools that are destroyed: 2477 education institutions have suffered bombing and shelling, and 286 of them have been destroyed completely. We have a huge number of children that are abroad right now. Around 600,000  children stayed abroad for their studies. This probably that number we might never see again. A lot of Ukrainian women and families are not going back to Ukraine, first, because of security reasons, and secondly, whether there is a school, whether there is access to education? If there is a school, people are returning more eagerly. So for us, for Ukraine, education is a huge tool to get our people back.”

Vlad Rashkovan, the Alternate Executive Director of the International Monetary Fund: “First, we need to get grants, loans and later investments. Because without the private capital, it will be very difficult for Ukraine to reconstruct. Another principle is to build back better. We have a unique chance to get rid of the soviet legacy in our architecture, infrastructure, and urban  planning. And we must not miss this chance. The war is a very resourceful enterprise. We need humanitarian, military, logistical, sanction, and financial resources for surviving in the short term and in long term for reconstruction. We some kind encoring of our dreams, which mean accessing in European Union.”

Vlad also split the financial recovery process into four major steps. As a first priority, Ukraine needs finances to cover people’s immediate needs. Without surviving, the country will not be recovered. The second priority for Ukraine now is to get ready for the winter energy supply. The next priorities – money for recovery and reconstruction – will be financial support for the business sector and rebuilding the damaged cities. “It is not the war for the territory, it is the war of senses. And that is why Ukraine should be supported now.”

During the discussion, the role of human capital in recovery was also recalled. Volodymyr Turchynovskyy, Dean of the UCU Faculty of Social Sciences, said: “Human capital isn’t just an abstract concept, there are real people behind that. And it is important to understand our context just to see the dynamics might be received with that. A few things are really important to mention here. One thing is that Ukraine is a battlefield. And with all implications which are connected to this battlefield, I think Ukraine is a solidarity hub. And Ukraine plays a leadership role in establishing this kind of solidarity connection. It is also critically important to understand this war as a kind of existential war. The war between good and evil. And Ukraine is recovering those very important moral concepts and ideas. Our country is paying a high price for this”.

Also, Volodymyr Turchynovskyy derived a formula for the country to retrieve: “We should be working, increasing, building not to lose our resilience. Therefore, the recovery formula should be “resilience” plus “innovations.”