The University of Notre Dame (USA) held an international seminar from 10 to 15 October on promoting global education and the common good. Representatives from Ukrainian Catholic University took part in the meeting.

UCU was represented at the international seminar by: Liubomyr Tarnovskyi, Vice-Rector for Administration and Finance; Halyna Zherebetska, deputy director of Development department; Marta Tychenko, head of UCU Student Career Office; Anna-Yustyna Turchynovska, head of the UCU Admissions Office; and Nadiia Nakonechna, Head of the Educational Policies Department. Responsible for the organization of the seminar and the visit of the delegation was Notre Dame’s Vice President & Associate Provost for Internationalization, Michael Pippenger

Since Russia’s full-scale invasion of Ukraine on 24 February, The University of Notre Dame in many ways has demonstrated its solidarity with Ukraine and significantly expanded its support and cooperation with Ukrainian Catholic University.

During the visit, colleagues from Notre Dame, striving to support the institutional partnership between the University of Notre Dame and Ukrainian Catholic University, met with the delegates. The UCU representatives presented their work during the war, shared their experiences, and took part in meetings and discussions important for the university’s further development. Colleagues from Notre Dame talked about the development of the main areas of the university’s activity: attracting applicants, educating students, activities outside the classroom, chaplaincy, cooperation with graduates, fundraising campaigns, the university’s strategy, the development of entrepreneurship among students, etc. 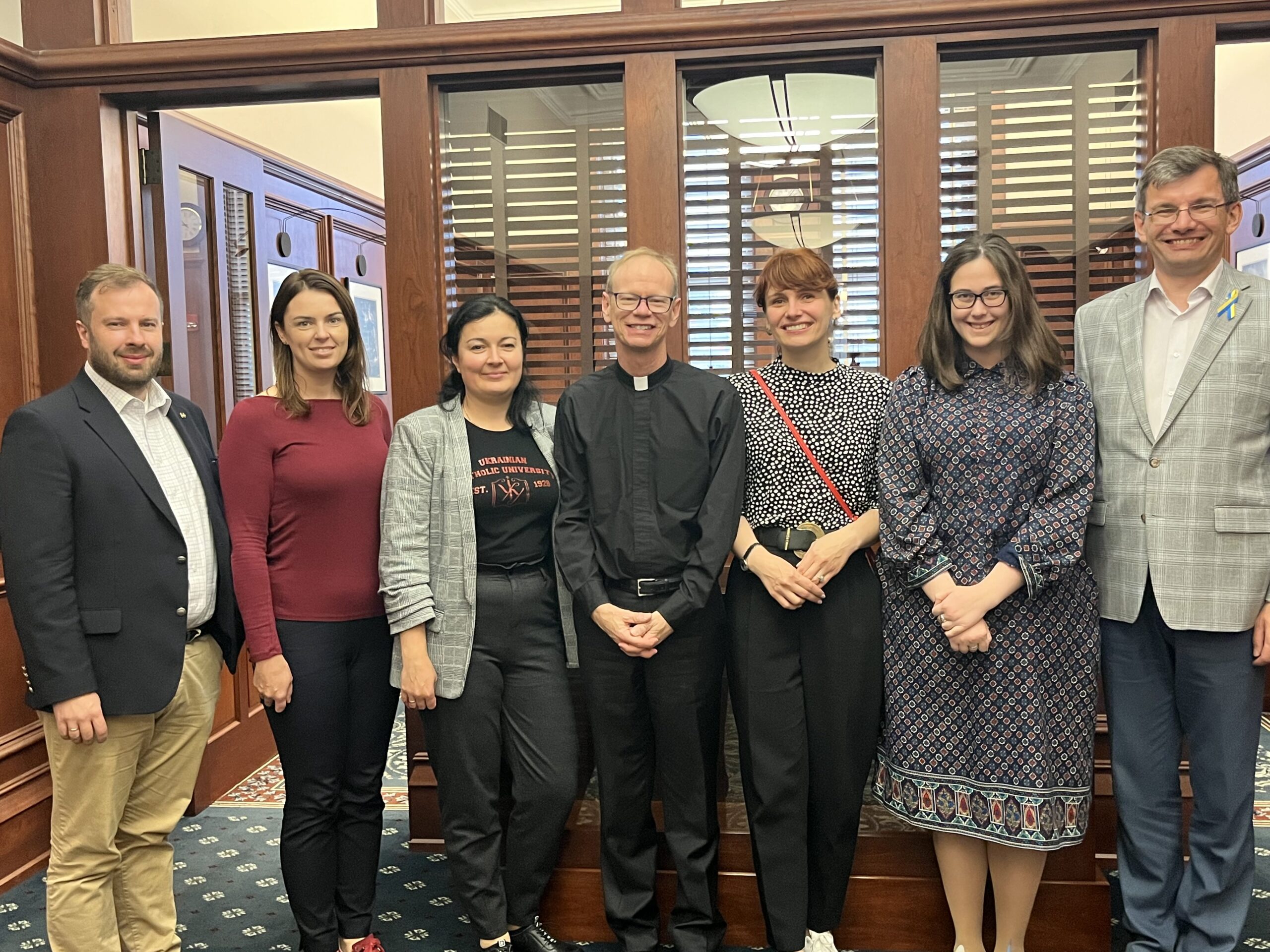 To acquaint the Ukrainian delegation with the University of Notre Dame, a tour of the campus was provided. It consists of 183 buildings on an area of 1 021 933 square meters in South Bend, Indiana, USA, and has a history of some 180 years. 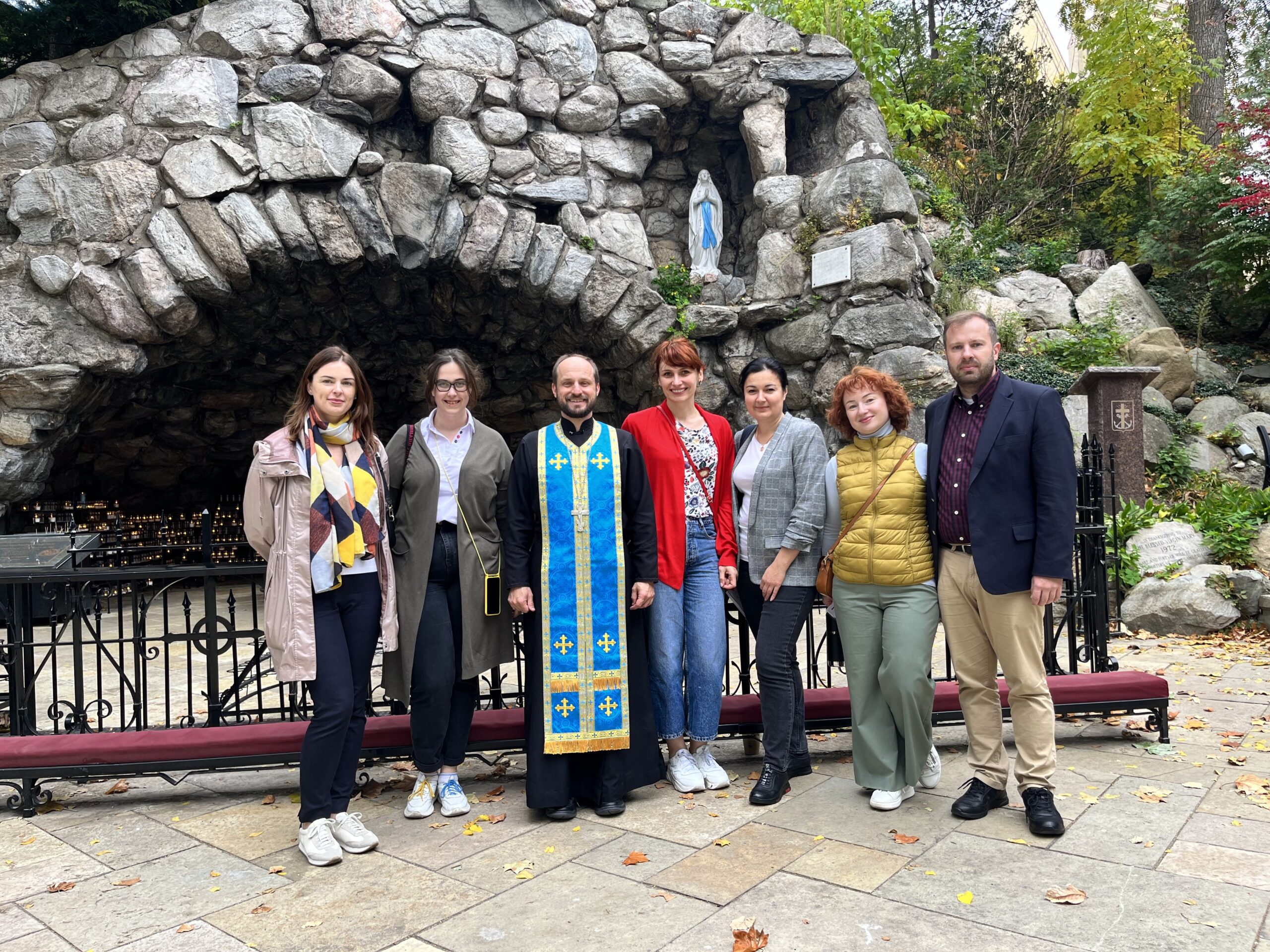 Liubomyr Tarnovskyi, Vice-Rector for Administration and Finance of Ukrainian Catholic University, said that, during its time at the University of Notre Dame, the UCU team received much inspiration, impressions, and new ideas for the university’s development:

“Above all are the impressions from people: professors, staff, students, and people we accidentally encountered on campus. Everyone we talked to spoke with enthusiasm about Ukrainians and expressed their support. Some people said that every evening their family prayed for Ukraine. One worker from the maintenance department, hearing me speak Ukrainian, thought I was speaking Polish. I responded that it was Ukrainian. He then said that his wife was from Poland and had collected and sent a number of boxes of humanitarian aid to Ukraine.”

In the words of the UCU vice-rector, Notre Dame’s university campus inspires with its beauty and size. They easily walked 15 000 steps in a day, for the campus covers a territory of over 500 hectares. The architecture creates an atmosphere of discovering something new. 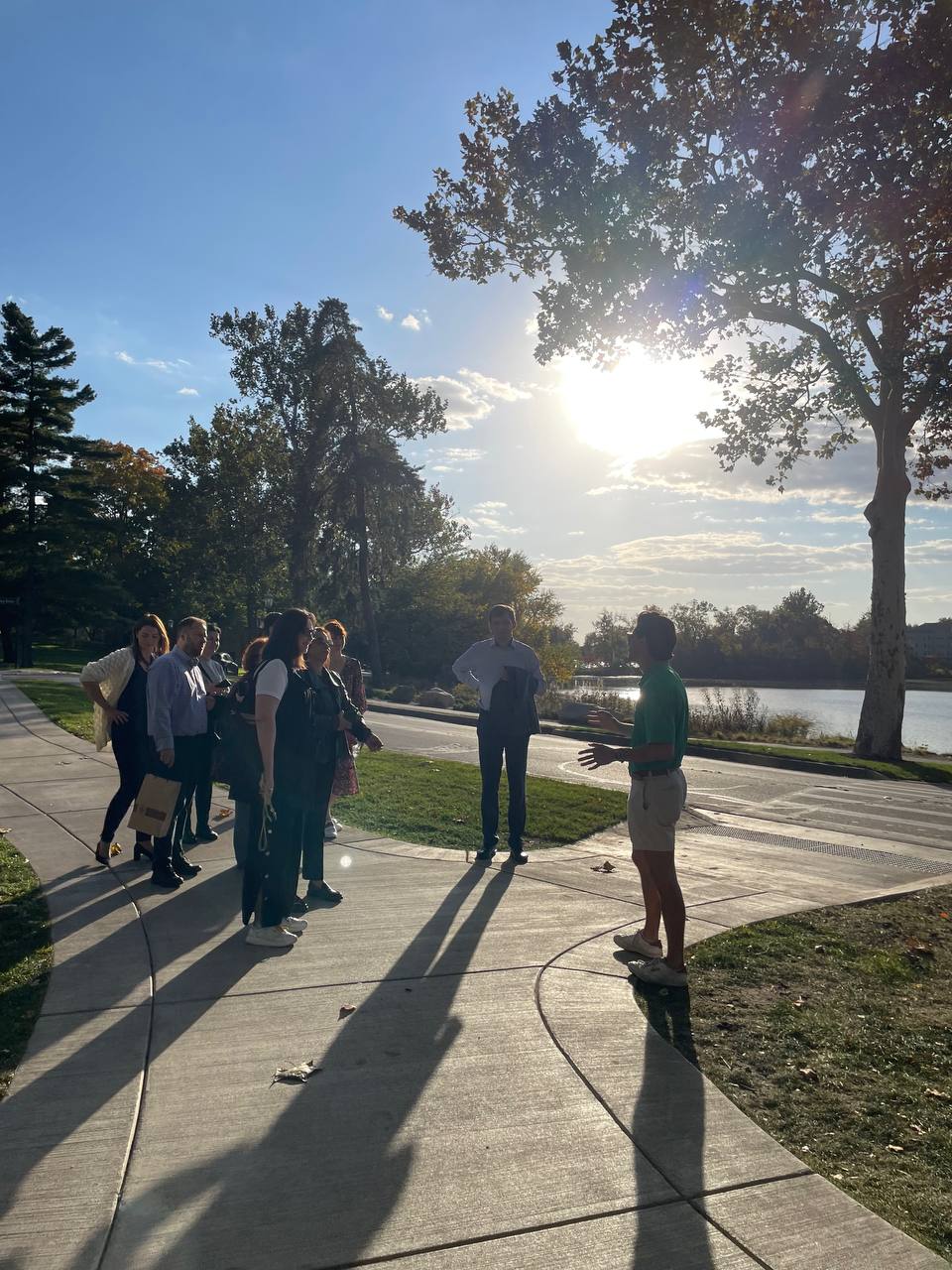 “All the staff are very professional, but we also felt a sincere desire on their part to become friends. Contact was not formal and dry but showed a readiness to communicate. We returned home with many notes and materials about how various departments of the University of Notre Dame operate. We have various ideas to improve our processes and introduce new ones. Much work is ahead. I want to thank Michael Pippenger, Catherine Wilson, Jonathan Noble, and Suzanne Wilson for the warm reception and for organizing our visit! I hope that a delegation from Notre Dame will soon be able to travel to Lviv, to UCU,” added Liubomyr Tarnovskyi.

The representatives of the University of Notre Dame demonstrated how they are helping Ukrainians in today’s challenges and expressed their readiness to support and be in solidarity with UCU at the level of the university and of separate divisions. The five-day program was very busy. During the visit, there were 24 meetings for the delegation and individual discussion in various areas. The delegates participated in discussions on UCU’s further development on the basis of the experience of the University of Notre Dame.

“This week at Notre Dame was very active, busy, full of new meetings, acquaintanceships, experiences, and impressions. Each meeting was also full of words of support for Ukraine and Ukrainians, which particularly impressed us. Our visit was not only six days spent at the University of Notre Dame. This was the start of greater cooperation between our universities and colleagues with whom we had the opportunity to meet and interact. It was also about new conclusions, ideas, and plans which we have already began to implement at Ukrainian Catholic University.” So Anna-Yustyna Turchynovska, head of the UCU Admissions Office, shared her impressions. 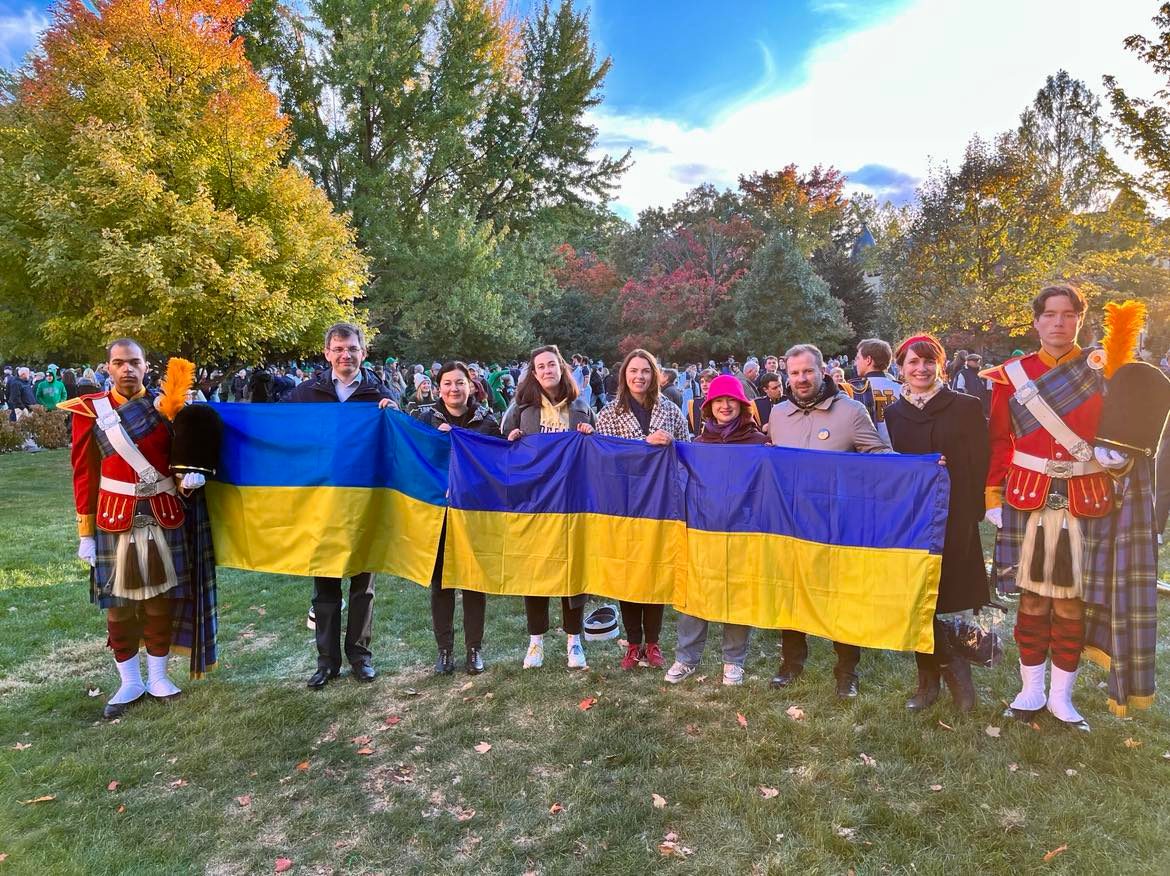 Halyna Zherebetska talked about exchanging experiences of cooperation with benefactors and graduates: “Michelle Joyce, Jay McAllister, Dolly Duffy – these are three department heads who made an exceptional impression on me by their openness and readiness to cooperate. Michelle Joyce and Jay McAllister showed their expertise and grandiose experience in working with benefactors of the University of Notre Dame. This was exceptionally valuable, and I am sure that their experience will be of use in UCU’s coming development plans. In addition, I met with Dolly Duffy, who is acting director of the Notre Dame Alumni Association. In conversation, Dolly shared approaches to forming and engaging a community of graduates of an educational institution with a more than 180-year history so that they participate in the life of the university after their graduation. And I must admit that graduates actively support their connection with the university decades after finishing studies. It’s worthwhile for us to introduce these approaches at UCU,” shared the assistant head of the UCU Development Department.

A highlight of the visit was inviting the delegation to the football game of the season, between Notre Dame and Stanford, which was viewed by some 100 thousand fans.

“One of the biggest impressions I had was from the football game. This was not simply a sporting event, but a spectacular show for 80 000 viewers, which, in particular, the student orchestra, The Band of the Fighting Irish, created,” said Liubomyr Tarnovskyi. 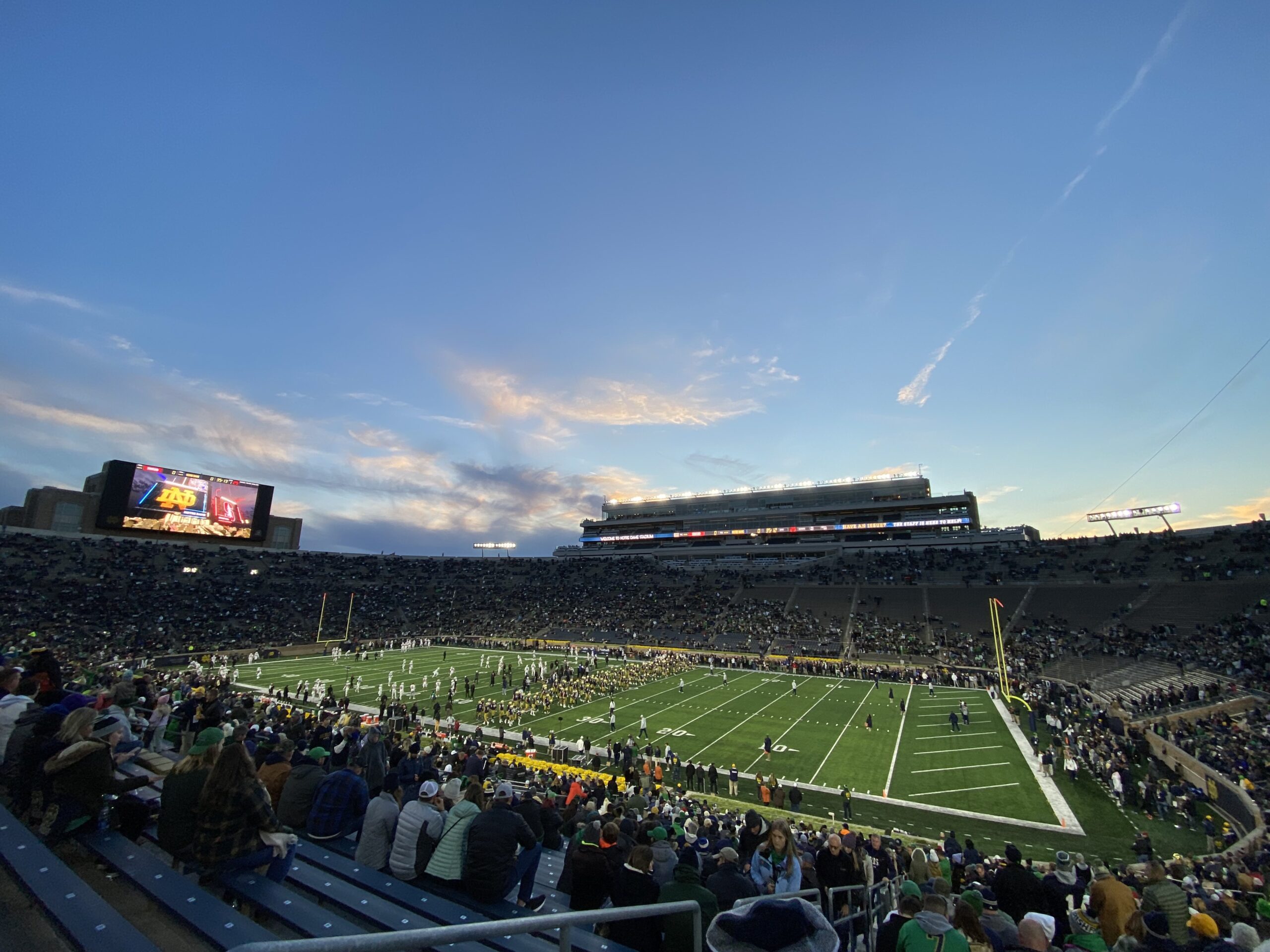