At the invitation of the Kyiv Security Forum, prominent American historian Timothy Snyder named ten reasons why Ukraine’s victory in the war against Russia is important to humanity. Here is his speech.

I’m Timothy Snyder, I’m historian and I’ve been asked to speak to you about the significance of a Ukrainian victory.

We’re all thinking about victory or at least the end of the war as we get into May. What I’m about to speak to you about is the significance of this war and how this war might end or how this war must end. 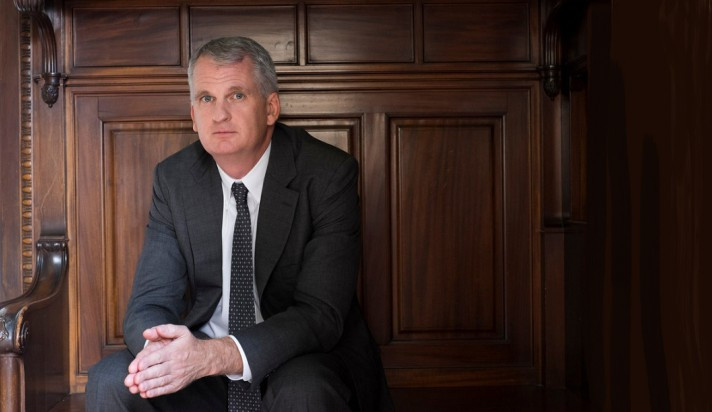 The first perhaps the most fundamental is that Ukraine’s victory, I believe, is the only way to achieve peace. Presumably all same people would like for this war to come to an end. I believe that a victory by Ukraine is the only way by which this war can come to an end. A Russian victory will lead to further Russian aggression. A Ukrainian capitulation will lead to the continuation of policies of atrocity on Ukrainian soil. The one way I believe that this war could actually end is with a Ukrainian victory, that is with sufficient Ukrainian success on the field of battle that Russia believes that is in its interest to negotiate.

Secondly, I believe the Ukrainian victory is important for the security of the region. The only way that Ukrainian population could be protected is by way of Ukrainian victory. But I believe it is also very significant for the populations of the Baltic countries, of Poland, of Romania, of Moldova that Russian aggression against the neighboring country not succeed.

The fourth reason, extremely important I believe, has to do with the defense of a democracy. One reason this war is being fought is that Ukraine is a democracy. Ukraine has that kind of unpredictable political system which throws up unpredictable combinations, unpredictable leaders. It’s that unpredictability, it’s that inability to know what’s going to come next that I think is so intolerable for Mr. Putin and for this kind of Russian regime. So one reason why it’s important for Ukraine to win this war is for a democracy to protect itself.

But I believe, and this is my next point number five, that this is important for democracies as such. Were Russia to win this war that would be tremendous victory for all forces that oppose democracy, for all people who are planning to use violence of one kind or another to overthrow democracies. If Ukraine wins that is a victory for those who believe in law, who wish to hold elections, who wish to hold their leaders accountable, and especially for those who are willing to take risks for all those important things.

Relatedly, and this is reason number six, that a victory by Ukraine is also a victory by a state which is traditionally been seen as peripheral, which is traditionally been seen as colonial against a power which was like to see itself as central and as imperial. Imperial wars as we know, especially from the nineteenth and twentieth century, belong to a certain phase of political development. Imperial wars will continue so long as imperial powers believe that they can win them. Every European power and plenty of other powers reach a point where they realize that they will be exhausted by imperial war and that is, frankly, a very good thing, a good thing for everyone concerned. So because this is an imperial war, a war which Russian leadership claims that there’s no Ukrainian people, there’s no Ukrainian state, a victory by Ukraine is important to defend the basic principle that nations are equal and states deserve respect. Another words, victory by Ukraine is one more push towards a post-imperial world.

I think it’s very important, as this war is being fought, to consider it, assuming the people are doing it, in the light of a World war II. But in particular to consider it as an opportunity to preserve certain virtues which many of us believe were reinforced by that war or should have been reinforced by that war. Toleration for difference, for example. The importance of the rule of law and pluralism, for example. The importance of cooperation among democracies, for example. Number eight. I believe that Ukrainian victory is also very important for the future of Russia. Now to be very clear, I don’t expect Ukrainians to be thinking about this factor, but for the rest of us who are concerned about the security of Europe and security of the world it’s very important what kind of Russia we’ll be living alongside in decades to come. For Russia to become let’s call it a normal country where Russian interests are observed by Russian leaders, it’s very important that Russia loses this war. It’s very important that Russians cease to pursue a foreign policy which is about gathering land on a basis of entirely untenable myths. I believe it’s very important for Russia, for Russians and for future Russian governments to be in a position to think instead about the future of Russia and about the reality of Russian interests.  And I think a defeat on a battlefield here, although I wish there weren’t a battlefield and I wish there weren’t a war, I believe that defeat on the battlefield here will be a step forward towards that kind of Russia. Russia where Russians are able to think about a future away from imperialism. Russia where the past perhaps weighs a bit less heavily as myths on the decisions of the President. And Russia where interests can be considered and the future can be considered.

Number nine. Ukraine must win this war because Ukraine, as everyone knows, is a major source of food for the rest of the world. In the history of twentieth century Ukraine has been an object of colonization from all sides, because of its fertile soil. In a present war we observe as Russia illegally expropriates Ukrainian agricultural products and we watch as Russia illegally blockades the rest of the world from Ukrainian agricultural exports. Should this war continue it in this way, people in Africa, in the Middle East and elsewhere are going to be threatened with anticipated and then real food shortages. Which will have the consequence not only, I believe, in hunger and death, but also of political instability along the way. Ukrainian victory and reopening of world trade will prevent all of that.

Tenth finally, last but not least, and in some ways summing up all of these other points. Ukrainian victory is necessary to help point not just Ukrainians but all the rest of us towards the future. In a way the problem of Russian propaganda is a problem that we all share perhaps in less sharp form. Russian propaganda is all about the past, it’s all about the how things are predetermined, it’s all about seeking some kind of moment at some point in history where we were right and everyone else was wrong. But that is not what we need. We, everyone needs a future. We need a politics of the future; we need an event that can break us out of our rut and which will point us towards a future. I believe it’s very important that Europeans and others help to offer Ukrainians a future after this war in the form of membership in the European Union, and in the form of generous aid which allows Ukrainians to rebuild.

But I think the process goes two ways. I think if we are open-minded and generous about the way we look at Ukraine, about how we look at this war, we can see that Ukrainians are also offering a future to us.

I think this time should be used to think about the future. Not just a future in which Ukraine joins other democracies in different forms of cooperation, but also a future in a broader sense where a Ukrainian victory demonstrates that individual action matters, that people can take responsibility, that the range of possibility is broader than we think, that there are things that can happen in the future that perhaps are better than we think.

Ukraine or Ukrainian victory also point us in that direction.

Thank you very much for your attention.