The newly-opened center is called to find solutions to global problems of values. Specially for the opening, the UCU Kyiv Center held a forum, UCU global, with a series of annual discussions about challenges of the future. 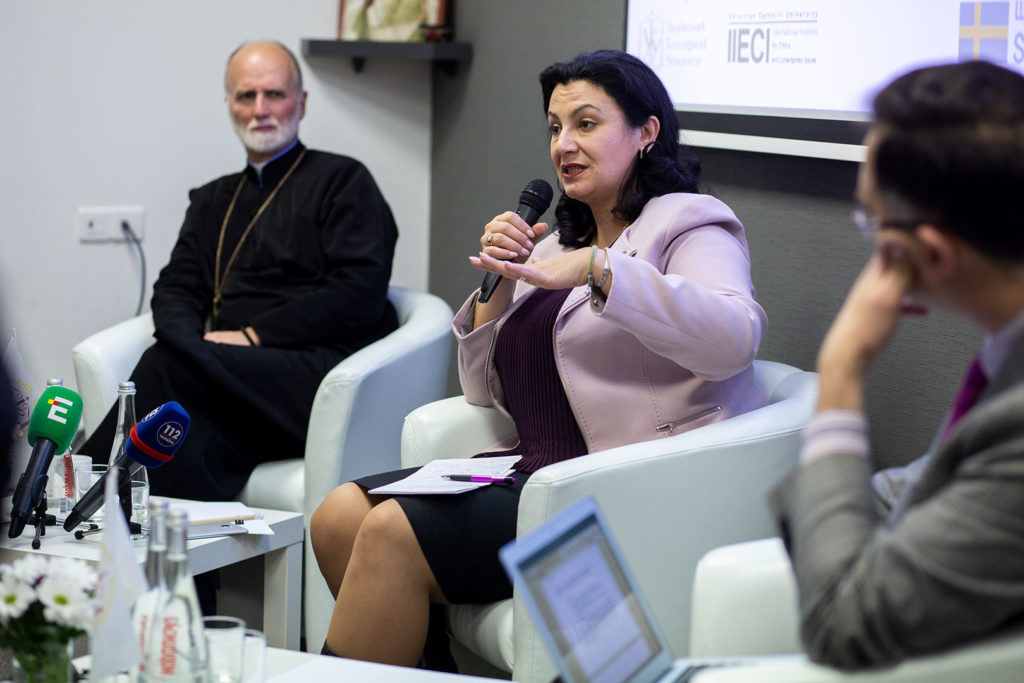 “Since the time of its founding, the Ukrainian Catholic University has grown by three, and for two years has had representation in Kyiv. We created the Analytic Center to pass on the values on which the university is based and which now lie at the basis of any decisions of UCU in public policy. Its activities are dedicated to researching current global questions,” explained Oksana Kulakovska, director of the UCU Kyiv Center. 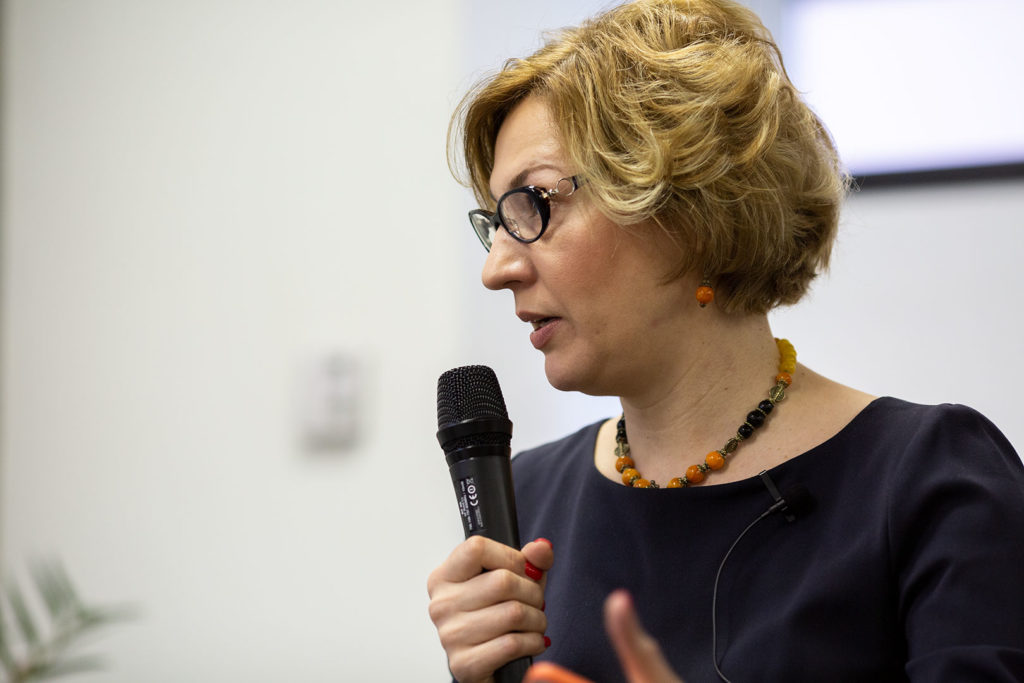 Present at the opening and participating in the discussions were: Ivanna Klympush-Tsintsadze, Ukrainian Vice-Prime Minister for European and Euro-Atlantic Integration; UCU President and Bishop Borys Gudziak of the UGCC Paris Eparchy of St. Volodymyr the Great; and Andy Hunder, President of the American Chamber of Commerce in Ukraine. We offer you some particularly interesting thoughts from the discussions.

On integrating Ukrainian society and business and government institutions

“2019 brings new challenges for Ukraine. Presidential and parliamentary elections will happen, where populist forces which propose easy solutions to complex situations enjoy the greatest popularity among the population. In order to oppose the populists, it’s necessary to create active institutions which would be able to form long-term development strategies. Ukrainians are historically, civilizationally, and culturally Europeans, but they also need to become Europeans institutionally.

“Today is difficult not only for Ukraine but for Europe, also. In the West they are striving to respond to new threats with old methods. If the USSR previously strove to show that, de jure, it functioned within legal boundaries, today’s Russian Federation fully disdains even legal principles. Ukraine has experience in the conflict against modern Russian aggression, which it would like to share with Europe, but, precisely because of outdated Ukrainian institutions, Europe is not ready to receive our experience.” 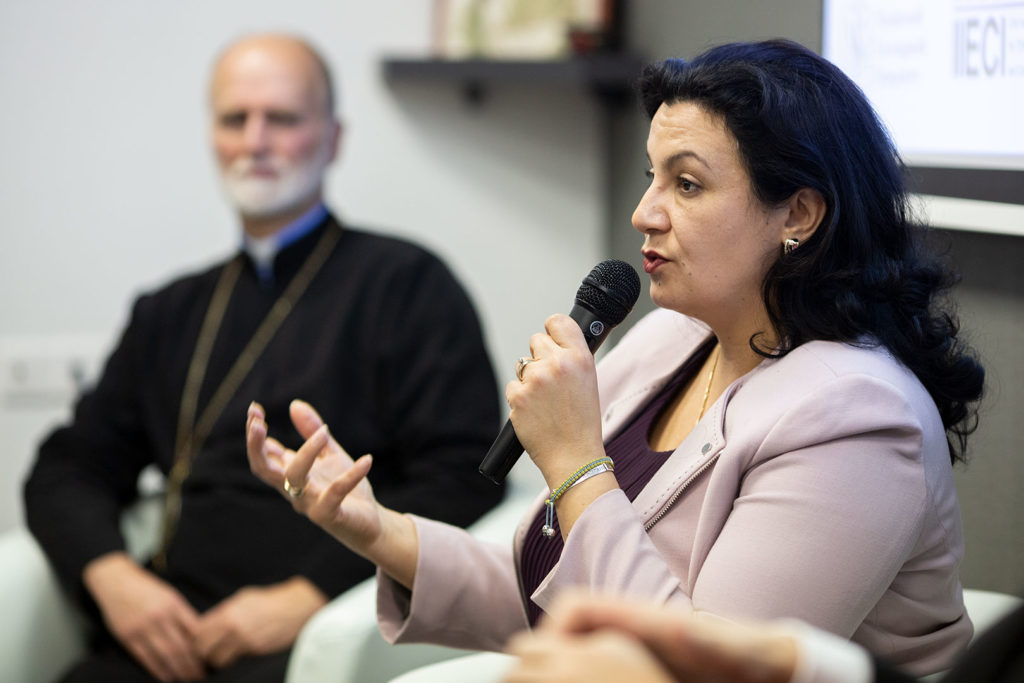 On legislation against corruption

Andy Hunder, President of the American Chamber of Commerce in Ukraine:

“3-D printers, autonomous automobiles, and artificial intelligence have led to the fourth industrial revolution. So it is exceptionally important that the technological mentality not influence the acceptance of ethical decisions. The greatest ethical challenges are anti-corruption legislation. Developed countries keep track of these so scrupulously that, currently, American companies which operate abroad are, nevertheless, governed by US anti-corruption laws.

“In Ukraine, the most fruitful dialogue is currently between business and the government. 74% of companies in Ukraine expect economic growth. It is important, however, that they play by the rules. It is necessary not simply to make illegal enrichment impossible, but to make it impossible to use ‘dirty money,’ also.” 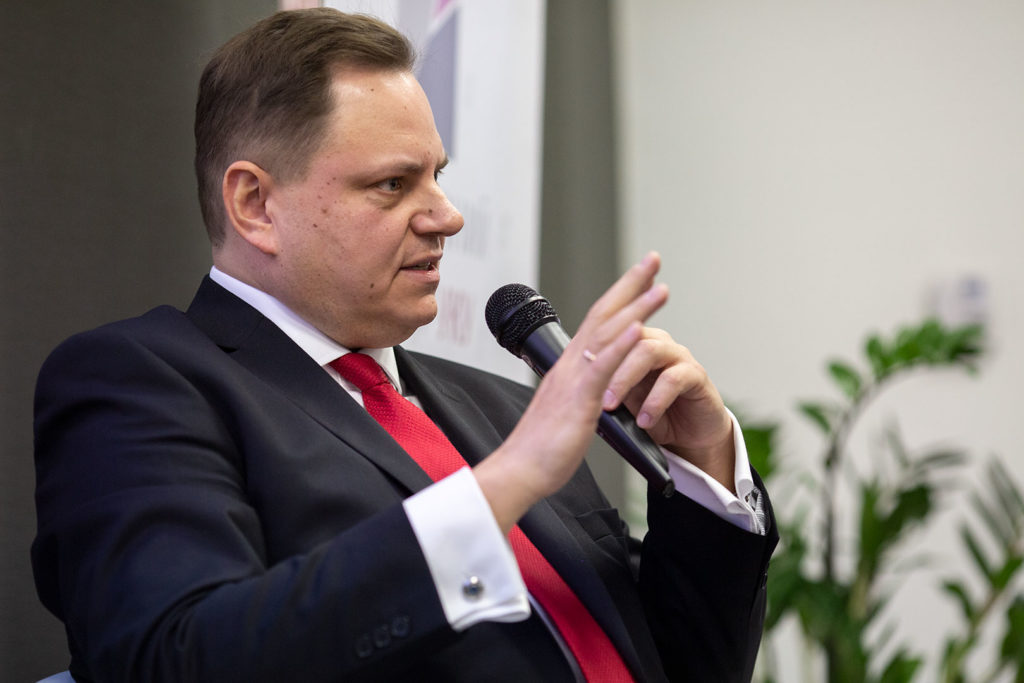 On European civilization and hope

“To think that it was better in the past is a great danger, as it is to compare the most tragic with the best pages of history. In order to see into the future, it is necessary to master courage and bravery, but to do this, it’s necessary to have a solid foundation. All European civilization is built on hope. This allowed citizens and architects to start building cathedrals and know that they themselves would not see the completion. It is hope which allows the building of long-term perspectives. Fear, on the other hand, is a bad adviser, because it paralyzes.

“On the Maidan, people came to know their own dignity and understood that they were there not because of political, legal, or social convictions. It is that dignity that is part of the core of human existence. It is impossible to describe this, like love, a child’s tears, and knowing how to remember and to forgive. Dignity, however, crystallizes hope and builds up prospects of eternity.” 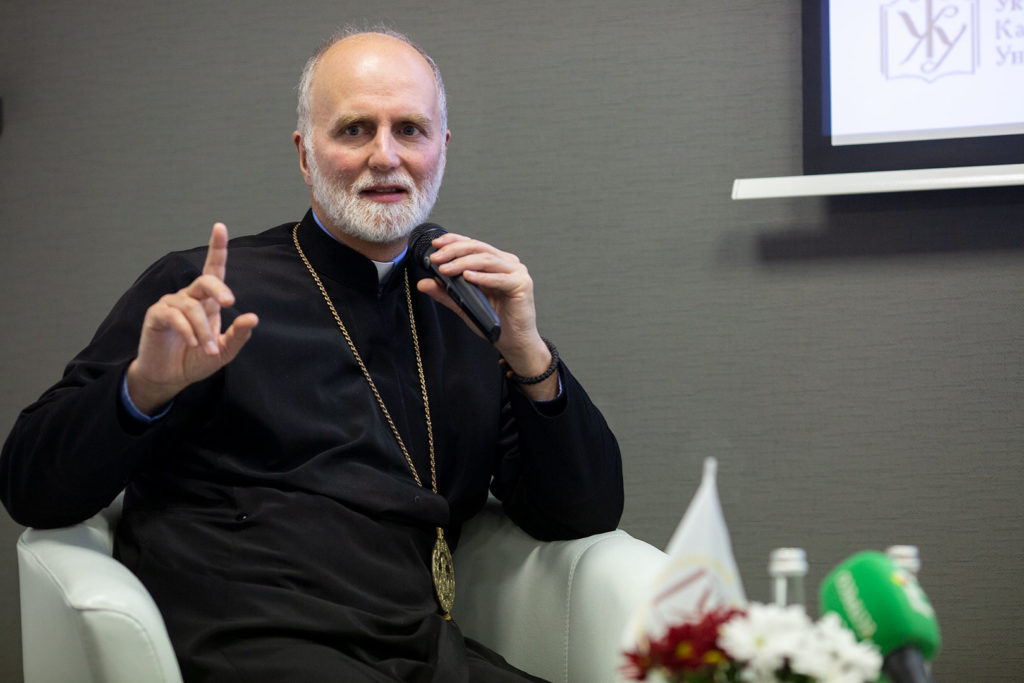 On forming free people in a free society

“The struggle for human awareness comes with the help of experiences. Culture, instead, holds the place of their integration. So we give much attention to formational programs where culture is fostered and communication established – this allows the creation of leaders.

“The human being has the strength to solve any social problems. However, for this it is necessary to think in categories of public culture. The market sorely needs this, as it feels the lack of a value matrix in its functioning. It is universities that are the places of social innovations which help master technologies and not be mastered by technologies.” 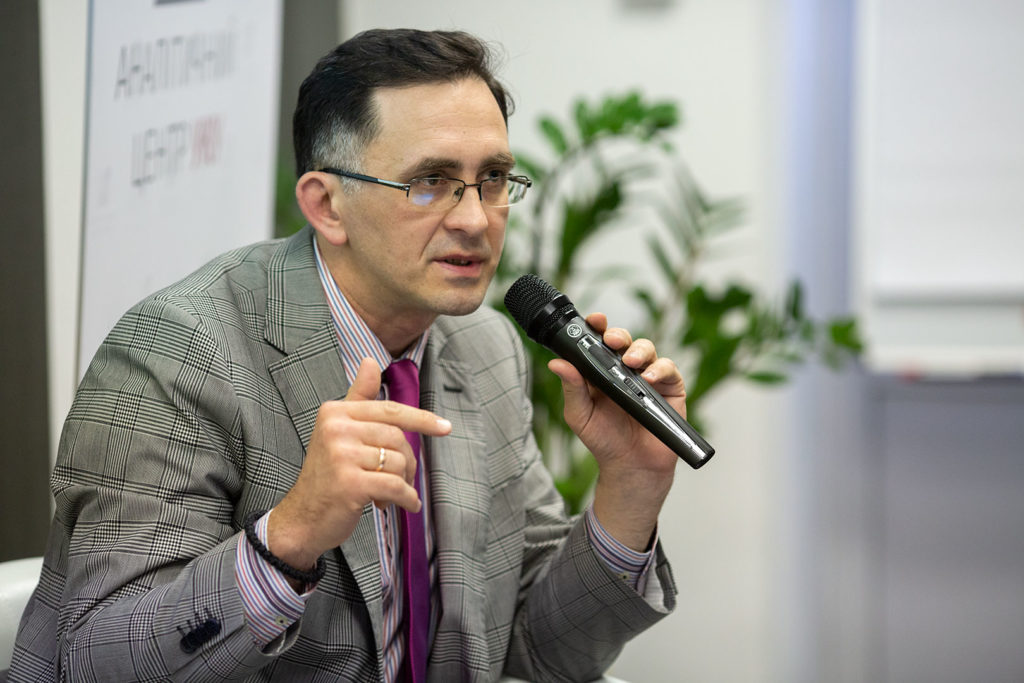 On the Church’s functions

“At UCU, much is said about values, which can sound abstract to those on the side. However, values can be explained by entirely concrete examples. Until 1928, Halychyna had not one ecclesiastical scholarly institution. Metropolitan Andrey Sheptytsky created the Lviv Theological Academy, inasmuch as the government could not take upon itself this function.

“When Patriarch Josyf Slipyj returned from the Soviet camps, he immediately created two UCU institutions in Rome. It was necessary to feel that responsibility which guided these historical figures and to realize that the Ukrainian Catholic University, from its establishment, is called to give the state new meanings.”

The UCU Kyiv Center has existed for two years. During its existence, 100 meetings, conferences, and seminars have been conducted at which the most relevant social problems have been discussed. 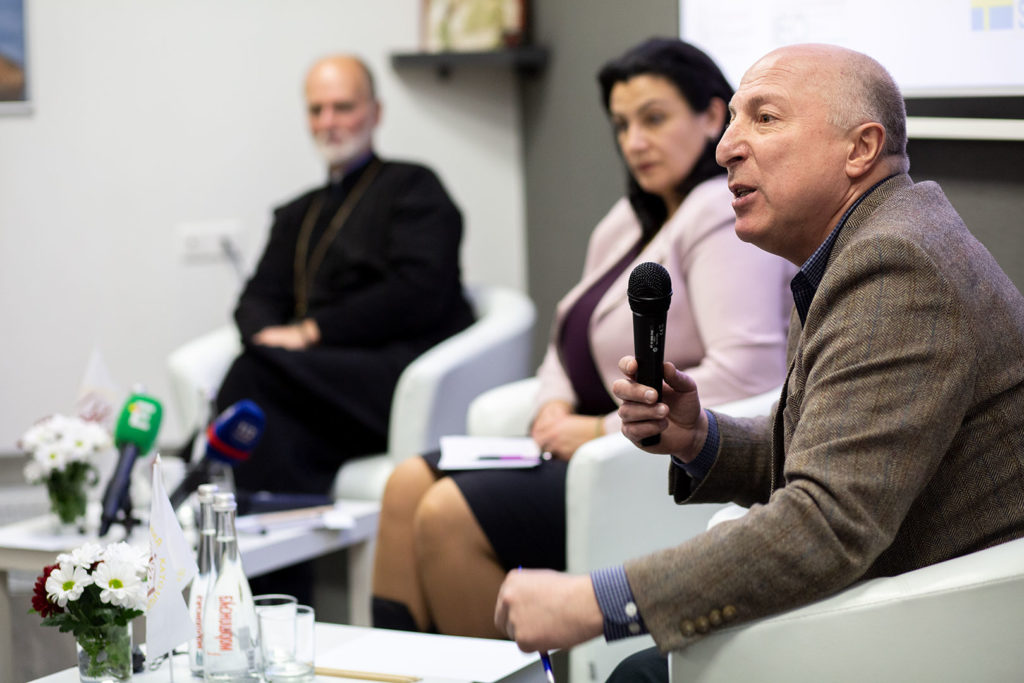