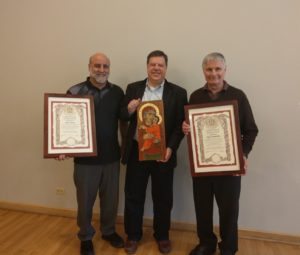 On February 17 th, the Board and staff of the Ukrainian Catholic Education Foundation (UCEF) bid an emotional farewell to the Foundation’s long-time Chairman of the Board Guy Camarata and
its former President John Kurey, while welcoming its new Board Chairman, Taras Szmagala, Jr.

Mr. Szmagala is a prominent attorney in the Cleveland area. He serves as Senior Vice President of Public &amp; Community Affairs and Corporate Communications at Eaton Corporation. Szmagala succeeds Guy Camarata, a former Executive Vice-President of Caltex, who served UCEF for 13 years, including 10 years as Chairman of the Board. During his tenure, Camarata was deeply involved in the development of an effective strategic planning process that enabled UCEF to launch a Comprehensive Campaign in the United States and Canada to help build a new campus
for the Ukrainian Catholic University (UCU) in Lviv, Ukraine.

A resident of Dallas, Texas, Mr. Camarata also served as a consultant to the Ukrainian Catholic Synod of Bishops, the Eparchy of Chicago, and many Catholic charities. Inspired by the vision of
Bishop Borys Gudziak (then Fr. Gudziak) and his closest advisers, John Kurey and Prof. Jeffrey Wills, Mr. Camarata decided to apply his experience in the corporate sector to help UCEF become a strong and sustainable charitable institution that could apply industry best practices and good governance while pursuing its mission to educate ethical and visionary leaders for the Church and for society at large.

“I was convinced by the Ukrainian story.” That’s how Camarata, who himself is of Italian and Lithuanian descent, spoke of the start of his involvement with UCEF and UCU, which included
numerous trips to Ukraine and countless hours spent on board matters.

Prior to his retirement from Caltex, Mr. Camarata spent many years as a top oil executive overseeing many of the company’s operations along the Pacific Rim, including Japan, Korea and the Philippines. It was there that he met his long-time colleague Charles Neubecker who introduced him to UCU and encouraged him to visit Ukraine and to see for himself the miraculous revival of the Ukrainian Catholic Church since it emerged from the Soviet Underground in 1990.

“UCU is a change agent, a chance to make the Ukraine you want,” Camarata told the assembled directors and UCEF staff. “Education, the right kind of ethics: these are key elements to change.”

Looking back on his many years with UCU and UCEF, Mr. Camarata said he felt blessed by his experience: “I’ve met so many fantastic people… I feel pleased to be a part of it. I feel pleased with the things that we did… [And] the fact that John and I are leaving right now says that we have confidence in the new chairman, the directors, the management,” Camarata emphasized.

February 17 th also marked the last board meeting for John Kurey, who has been involved with UCEF since 1996. Kurey originally helped establish UCEF as a charitable institution and then
served in many positions, including Executive Director and President. “This foundation and UCU have exceeded all hopes,” said Kurey.

Prior to his work for UCEF, Kurey worked for a major lawfirm in Chicago. Currently he works for both of the Maronite bishops in the United States, for Bishop Bohdan Danylo at the Ukrainian
Catholic Eparchy of Parma, for the Basilian Sisters in Philadelphia, and for the Armenian Catholic bishop.

Mr. Kurey spoke with deep satisfaction and pride with his work for the Foundation. Mr. Kurey helped to develop UCEF’s first major fundraising events in New York City, Philadelphia, Chicago
and Detroit. He also helped to recruit many members of the Foundation’s staff and he helped train the University’s development staff to launch its own fundraising campaign to help revive a culture of philanthropy within Ukraine. Through various fundraising galas and community outreach efforts, UCU’s Development Office has now developed a network of Ukrainian business leaders and philanthropists that last December raised over $400,000 dollars (US) at UCU’s annual gala in Kyiv.

Bishop Borys Gudziak, president of UCU, also bid farewell to the outgoing directors. “What you have done,” the Bishop said, “has changed the lives of thousands of people. You’ve set new standards.” UCU’s Vice-Rector for Development and Communications, Natalia Klymovska, who also serves on the UCEF Board, presented both Directors with honorary plaques signed by the
University’s Chancellor – His Beatitude Patriarch Sviatoslav (Shevchuk) and UCU’s Rector, Fr. Bohdan Prach.

“It’s hard for me to imagine UCEF or UCU without you,” said Ms. Klymovska, her voice tightening with emotion. “Guy and John, we have all learned so much from you.” Vice-Rector Klymovska also presented each Director with an icon of the Blessed Mother created by students at UCU’s School of Iconography.

Guy Camarata assured the Foundation’s staff and its new Chairman, Taras Szmagala that this was a very good time to retire, as the Foundation had just enjoyed its best year of fundraising on record, and the staff under the leadership of COO Joseph Solimini and the Development team led by Alexander Kuzma had developed a sound strategic plan going forward.

Looking forward to his new challenge, Szmagala said: “The generosity of our community is truly amazing. Ukrainian-Americans understand the special role that the Ukrainian Catholic University has fulfilled in Ukraine, and our community has helped make that happen. We all should be proud of that”.

With strong encouragement from Mr. Camarata and Mr. Kurey, UCEF has also succeeded in securing major private donations from outside the Ukrainian-American community, especially from several Roman Catholic donors that have now been inspired to donate over $8 million dollars for UCU’s construction and for pioneering programs serving orphans and families at risk.

Addenda: Taras Szmagala, Jr. is senior vice president, Public and Community Affairs and Corporate Communications, for Eaton Corporation. Taras is responsible for representing Eaton with governments at the federal, state and local level, as well as overseeing the company’s corporate communications, marketing, community involvement and corporate contributions programs. Prior to that role, Taras served in roles of increasing responsibility within Eaton’s law department, including vice president and deputy general counsel, as well as chief counsel, Industrial Sector, where he was responsible for coordinating the legal support of Eaton’s aerospace, hydraulics and vehicle businesses. Before joining Eaton in 2007, he served for nine years as group counsel with Avery Dennison Corporation. He started his career with the law firm of Squire Patton Boggs in 1991, where he was resident in the firm’s Washington, D.C., Kyiv, Ukraine and Cleveland offices. Taras holds a B.A. in economics, and a J.D., both from the University of Virginia.