Ukrainian Prime Minister Volodymyr Groysman visited the Ukrainian Catholic University. The Prime Minister looked over the Sheptytsky Center, spoke with our students, and said that he would like his secretariat to study government administration at the UCU Management School. 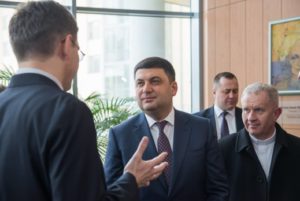 The visit began at the university’s Academic Building and the Sheptytsky Center, where the Prime Minister received a library card and met the rector and vice-rectors. Plans for cooperation were discussed at the meeting. UCU presented a proposal regarding the allocation of the so-called “budget designation” for the preparation of specialists at universities, regardless of the form of ownership. In other words, changes to the budget code provide all universities with the possibility foreseen in the law “On Higher Education” to compete for budgetary orders according to the scheme “the money goes with the student” on the basis of a broad competition. According to the results of rating universities on the basis of the scores of independent external testing (IET) of incoming students of 2017, UCU is the university where the smartest students in Ukraine have been admitted (https://www.radiosvoboda.org/a/vnz-rate/29012005.html). Incoming students’ median IET score is 182.5/200. 41.6% of incoming students (135 persons) come from the top 5% of high school graduates on the basis of the IET score in the “professional” subject. (They all could have studied according to the state system but chose a contractual form of study at UCU.) 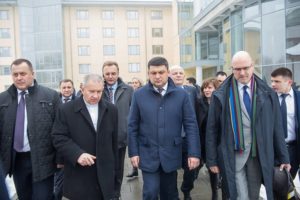 Other important questions discussed were: the approach to professional master’s programs; more priority for the experience of teachers/practitioners rather than scholarly titles; the possibility for foreigners to teach and for universities to make corresponding agreements for such teaching; and a modular form of instruction, which is extremely necessary for all working people who are not ready to study full-time, because the format of distance learning is considered insufficient. We expect that these and other propositions will be considered and taken into account.

Then the main part of the visit happened, a meeting with students. During the meeting, they discussed geopolitics, security and defense, and politics… “The students clearly understand their role in forming a strong country. And I was very pleased with a frank discussion with them,” asserted Volodymyr Groysman.

The question was asked: “Would it be realistic in Ukraine to launch a transparent government platform for grants or credit at low interest rates for small businesses or social projects?” The Prime Minister responded that: “Such programs are already starting to operate, both through international partners and through involvement of the local infrastructure. For example, the state Oshchadbank [savings bank] together with municipalities has launched a global system of support for small and medium businesses. We also support small and medium businesspeople. We’re creating a system to support young scholars…” 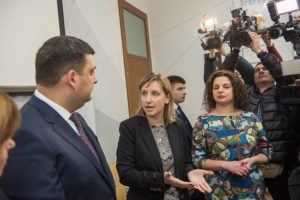 The students were interested in practical steps to combat corruption. Here Volodymyr Groysman responded that concrete areas of work have already been developed: all registers of property are open, and requirements for officials regarding the registration of property and a reformed system of public purchasing have been increased.

“This is my first time at your incredible university. I am impressed at what I’ve seen: the organization, the atmosphere, and, without a doubt, UCU’s students. I see here Ukraine’s future and want to wish the university continued success, for the level of education and the environment in which you work, that’s what the new Ukraine should look like.” Volodymyr Groysman summed up. He expressed the idea that his secretariat should study government administration at the UCU Management School and then he made a request to develop an educational program for staff of the Secretariat of the Cabinet of Ministers of Ukraine.