The International Association for the Humanities in partnership with the UCU Analytical Center in Kyiv assembled Ukrainian and foreign specialists in the humanities to determine what Ukraine needs to build social trust. The two-day academic and practical seminar began with a noted expert on the theme and friend of UCU, Francis Fukuyama. The discussion continued in a circle of noted Ukrainian scholars and researchers: Valeria Korablyova, Oleksandr Paskharev, Olena Stiazhkina, and others. 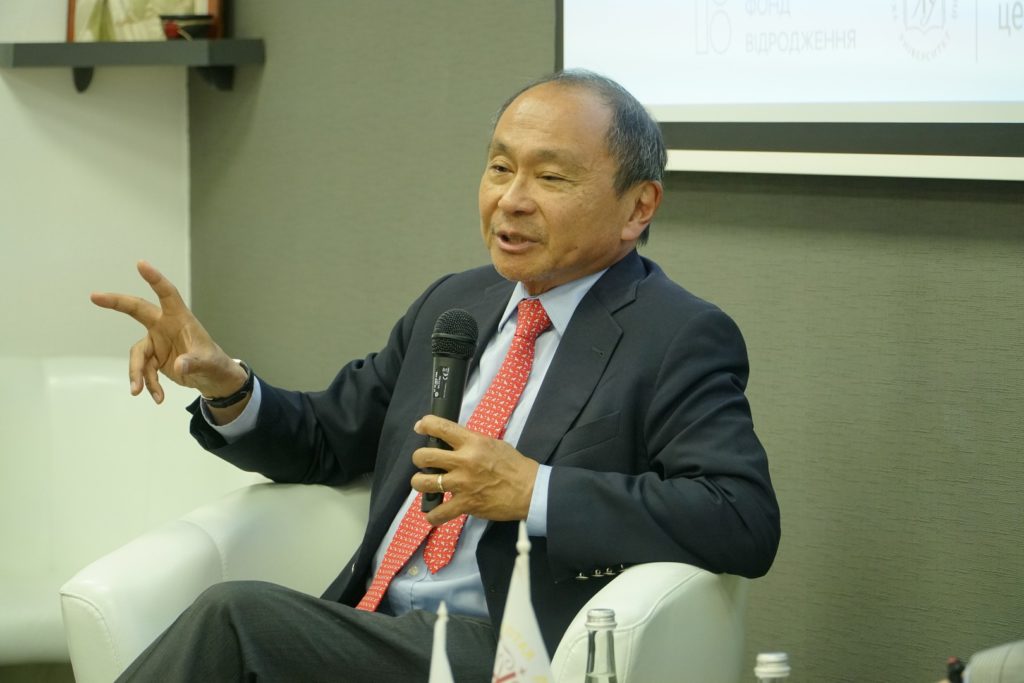 During the seminar the organizers tried to reflect on crises of vertical and horizontal trust, to determine how the impulse of trust that arose on Independence Square dissipated, and to consider prospects for rebuilding trust in institutions and fellow citizens.

The discussion started with the lecture of American political scientist, philosopher, and publicist Francis Fukuyama. He admitted right from the start that trust cannot be a first-level object of analysis, for it is a phenomenon derived from a country’s general social capital. But Fukuyama emphasized that the feeling of trust is, at the same time, a result of common values and desires, and a guarantee of the community’s effective activity, religious center, and government. Moving to the theme of vertical trust, that is, trust in the government, the American professor gave examples from the history of Italy, France, and the Soviet Union, concluding that the level of general trust in society, and faith in the government in particular, depends on the positioning of government authorities. Fukuyama also shared his impressions of modern Ukrainian history: “Actually, I am impressed with Ukraine. I am sincerely surprised that there is civil society here. In the 1990s, I predicted that significantly more time would be needed for this. When the Orange Revolution happened, I said: ‘Hmm, this is interesting, very interesting.’ I really did not expect that people would appear in Ukraine who would go out and protest a corrupt president. When the Orange Revolution did not lead to positive movements, I thought: ‘This is bad: it was a great chance for Ukraine.’ But in 2013-2014 it happened again. It is difficult to explain this, considering that the Soviet Union was once here.” 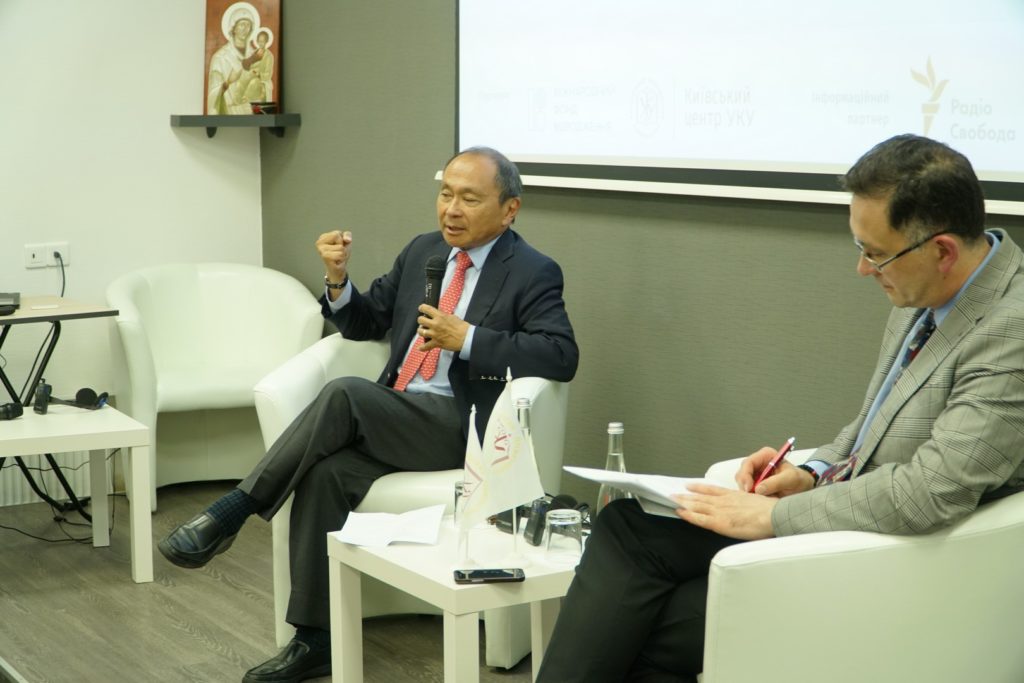 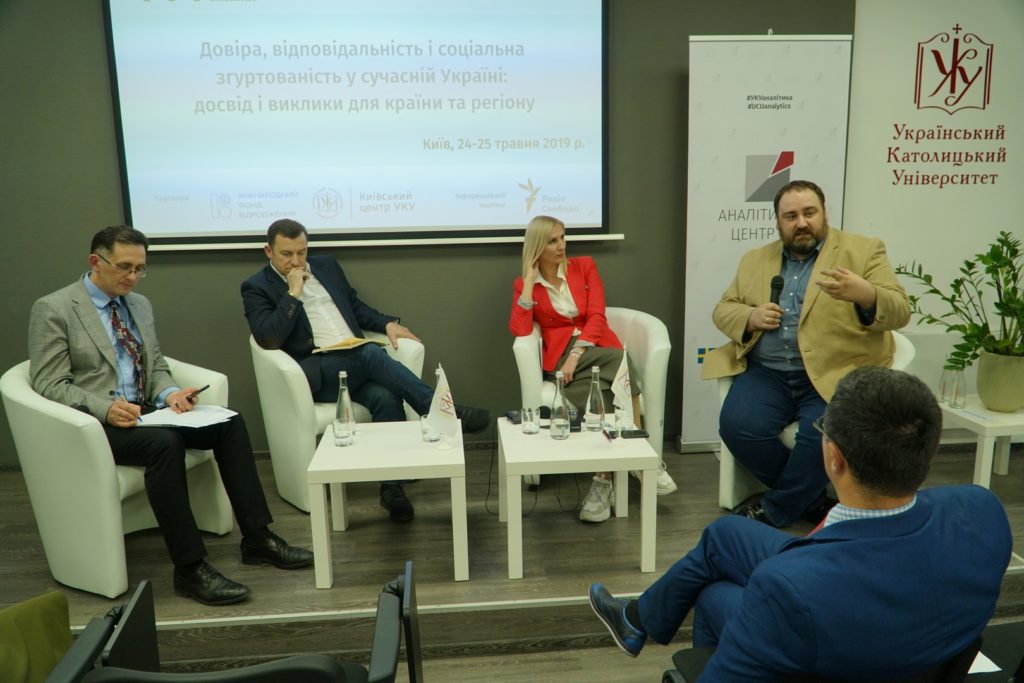 Participating in the next panel discussion were Ukrainian experts Valeria Korablyova, Yevhen Hlibovytskyi, and Yaroslav Rushchyshyn. Speaking about research on the level of social trust in Ukraine, Doctor of Philosophy Valeria Korablyova considers the cause of critically-low indicators to be historical events which step by step have atomized Ukrainian society and support hostility towards others. In contrast with these historical traumas, the expert stated, the Maidan was able to become and became that moment that made trust in a stranger possible. At the same time, Korablyova emphasized that 10% of citizens took part in the Revolution of Dignity and another half supported the Maidan: “However, the other half of the country was opposed. It turns out that it was a passionate minority and that the majority is constantly in doubt. Against the background of infantilism and the absence of an awareness of its own political needs, this majority is becoming an empty marker, an audience which will think as any populist wants it to.” 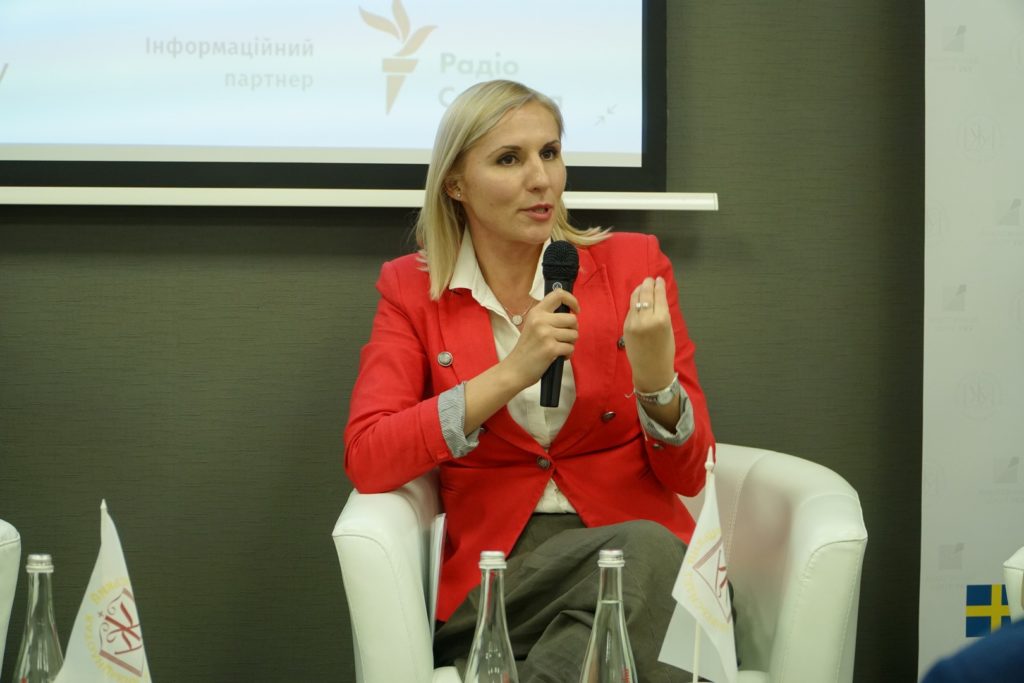 Noting that cultural patterns change with much more difficulty and more slowly than ideas, though the superficial acceptance of Euro-integration, democratization, and the rule of law as strategic guideposts did not guarantee automatic changes in behavior practices and patterns of thinking, Korablyova emphasizes changes in guidelines: “We should have developed guidelines for cooperation on behalf of the social good. And not only with those similar but even in conditions of ‘otherness.’ I am talking about the kind of trust in which, on behalf of the general welfare, we are open to others and will together build the future. But this openness to the other is one of the key problems on a Ukrainian and world scale.” 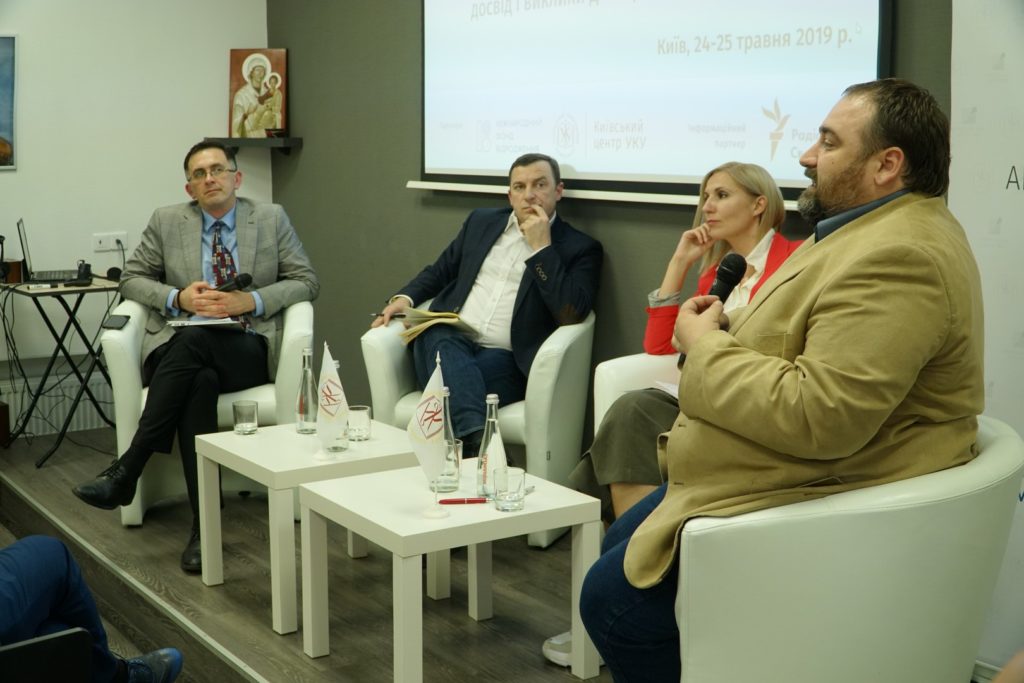 The expert also considers that society must be aware of its own responsibility for what happens in the country: “Fukuyama correctly noted that functioning institutions lead to trust, but society must make an investment in this trust so that institutions work properly.”

Journalist and political scientist Yevhen Hlibovytskyi also explains Ukrainian society’s crisis of trust by historical traumas: totalitarian and colonial. According to the expert, the intertwining of these two traumas causes not simply a feeling of defeat but also an inability to see a possible solution. He noted that no historical trauma should be treated as something from the past. Instead, it is worth looking at it as a process today: “When we look at what is happening in Donetsk and Crimea or the presidential election, we notice an attempt to ‘hack’ the political system. We notice that trauma is not a residual phenomenon that is dissipating. It continues in a process of constant development.” In particular, totalitarian trauma, according to Hlibovytskyi, leads to an inability to trust the government. Then one of the consequences is the so-called “poisoning” of civil society: “Civil society starts to take on the majority of the government’s functions, and loses its vision of prospects, and the country is in a state of permanent revolution.” 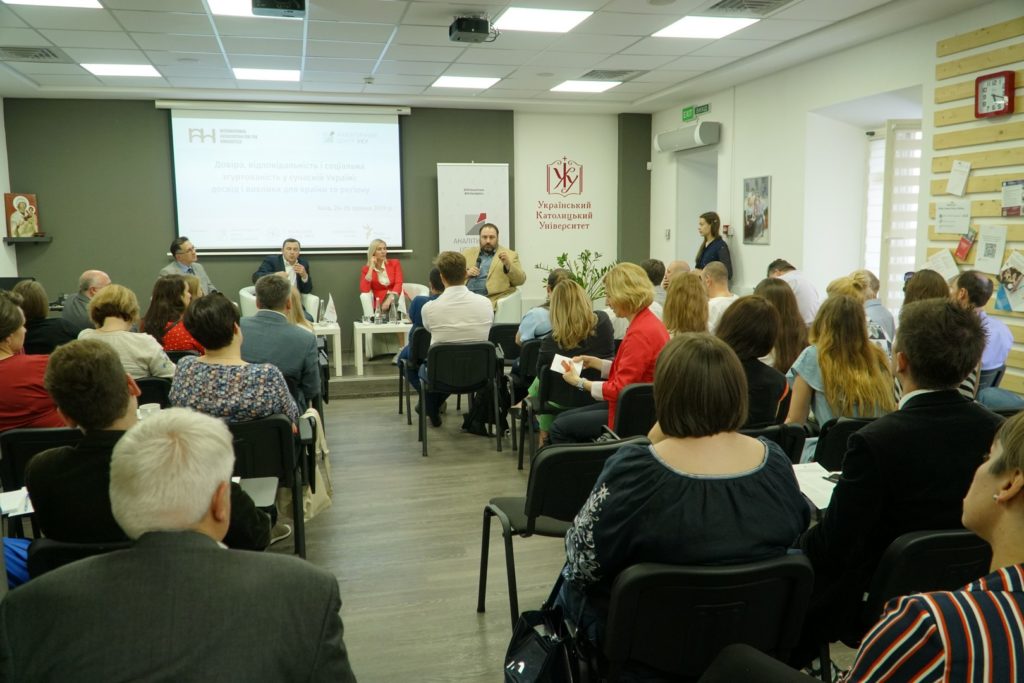 Historian and writer Olena Stiazhkina spoke during the second panel discussion together with economist Oleksandr Paskharev and political scientist Oleksiy Polehkyi. In her speech, Olena Stiazhkina shared her personal experience and with it tried to explain her understanding of historical traumas. In particular, one of today’s triggers of historical traumas is still the ubiquitous presence of Soviet language. Referring to a concept of Ludwig Wittgenstein, the historian focused on Soviet language as a frame in which Ukraine’s society and politicum for now lives and operates. Giving examples from modern uses of language, Stiazhkina emphasized one of the characteristic features of Soviet language which Nikolai Vakhtin has noted: “In Soviet language, it is not important whether a truth or a lie was said. Instead, much more important is time, when this was said, whether these words were correctly used in this place. The field of Soviet language today remains for us a minefield of delayed action. And it slowly explodes, if not because of our efforts then because of our blindness,” the scholar observes. 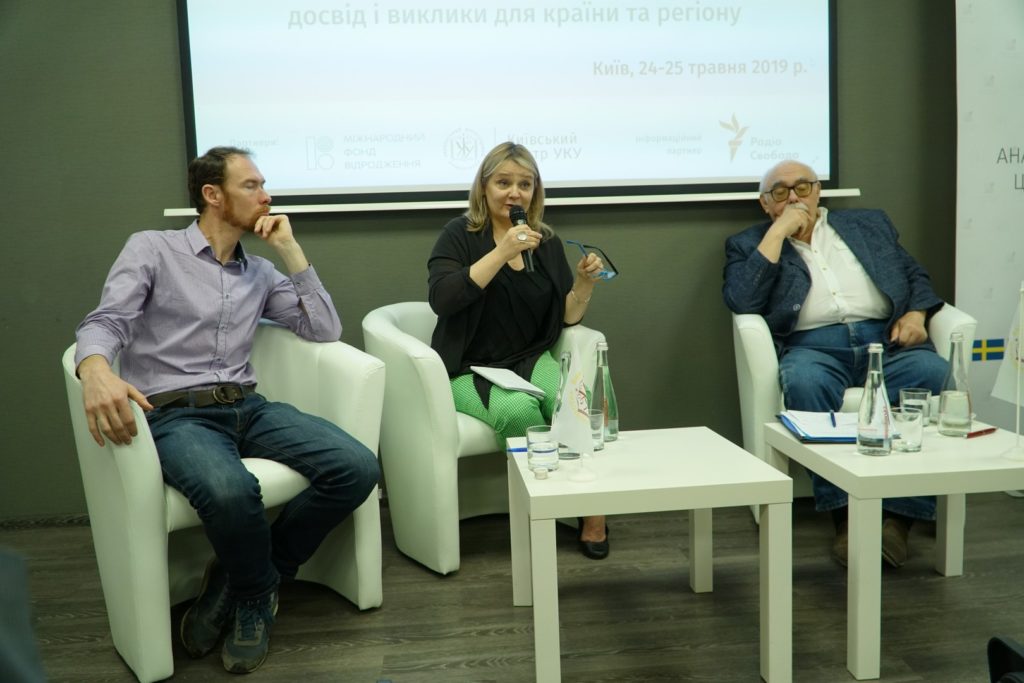 In one of her examples, Stiazhkina also proposes viewing Soviet trauma as a situation of the unexpressed, unreflecting personal “me” of each person. Recounting the process of researching Soviet food, she notes that, to the question of what food you can call your favorite, her friends have no response. “It’s as if the non-traumatic, refined theme of the Soviet kitchen to me expressed yet one more trauma of late-Soviet times, which lies in the non-existence, absence, lack of expression, and lack of awareness of one’s self, and not only by the government but by you yourself. I don’t know who I am. An ‘I’ who can make a choice, a preference, express an opinion does not exist. Here food reflects this trauma at a basic level, where I should feel in an existential way. And, including regarding food, my trust in the world is built on this. If I don’t know about myself, what I like, then I accept the external world as obviously hostile to me,” concludes Olena Stiazhkina. “And, as it turns out, this trauma of non-existence has not been overcome today. And we don’t even see it as a problem, because we are imitating toxic parenthood. We bring children to schools which have not stopped being a gulag, and to universities where it is necessary to address teachers with patronymics and the formal ‘you.’ Through all this we continue to argue against the value of the individual person,” she adds. 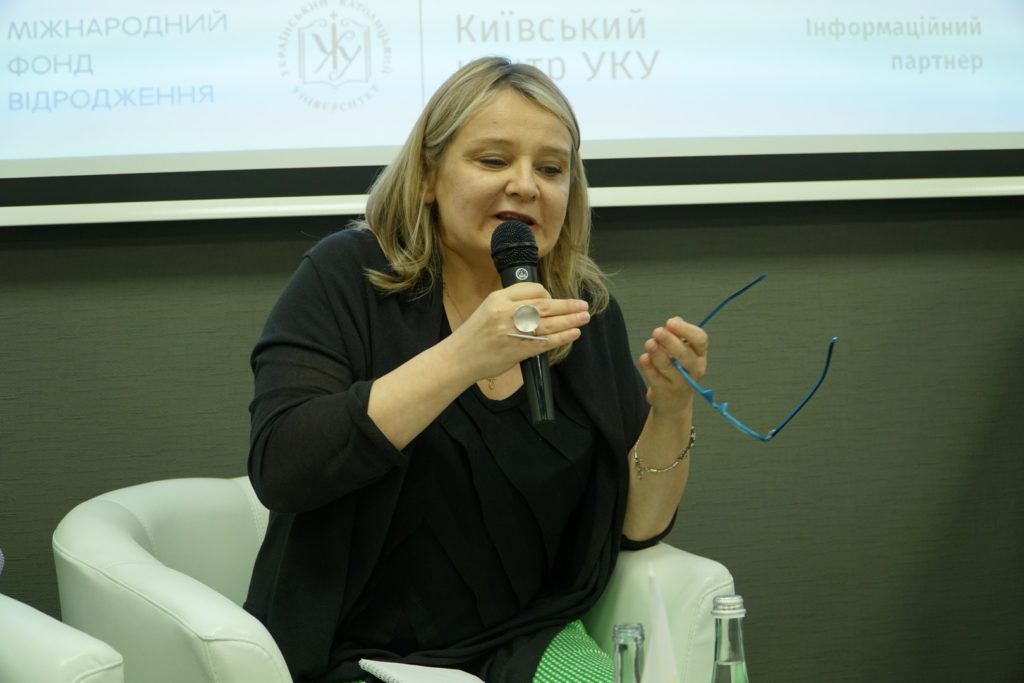 Oleksandr Paskharev, who spoke after Olena Stiazhkina, noted that, when speaking of a crisis of trust, it is worthwhile always to understand that consequences can be confused with causes. And so, he admitted, for him personally the Revolution of Dignity became a decisive moment in Ukraine’s historical development. In his opinion, the crisis of trust which we observe today witnesses not so much to the failure of the Revolution as to the seriousness of the problem, which it is impossible to overcome immediately: “Why didn’t the Maidan, which expressed the idea of the future of the most active part of the population, end in the creation of influential structures? I think this was a manifestation of our fundamental failing. When we don’t trust, we defend ourselves. But we continue on in defense. We don’t trust more than we need to. The process of lack of trust is very persistent.” Among positive aspects, Paskharev noted the essential weakening of Russia, thanks to which Ukraine was able to enter a new stage of historical development. Expressing hope that Russia’s weakening will continue, Paskharev expressed an optimistic view of Ukraine’s future: “I think that processes like these are not short and this gives Ukraine a chance to become a truly independent country.”

Philosopher and translator Oleksiy Panych, who played the role of “devil’s advocate” in the panel discussion, admitted that the absence of horizontal trust among Ukrainians is also historically conditioned. With the example of two models of behavior, lawful and unlawful, he explained that the inability of citizens of Ukraine to trust is caused by the fact that they cannot immediately admit whom they are dealing with, for neither the geographic origin nor the language of their interlocutor can reliably demonstrate the values which he professes. And so, not having the ability to trust on what grounds their interaction is based, and also not knowing what to expect, Ukrainians prefer lack of trust and tactical defense. 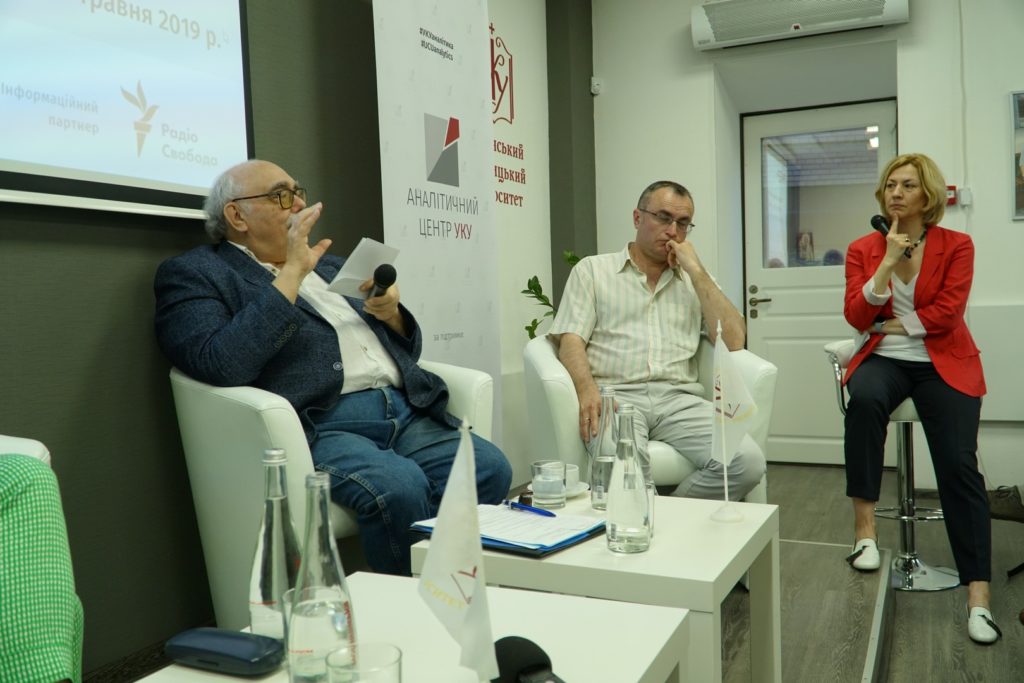