The discussion “(Sustaining) Life after Victory: Security dimensions of the life of Ukrainian society” was held in Lviv on 10 September as part of UCU Days. The meeting was the fourth in a series of conferences for analytical communities which plan to: discuss the lessons of today’s war; emphasize prospects for changes in society, politics, economics, and culture; and determine the values underlying the country’s future renewal. The realization of the initiative happened as part of a joint project of Ukrainian Catholic University and National University Kyiv-Mohyla Academy. 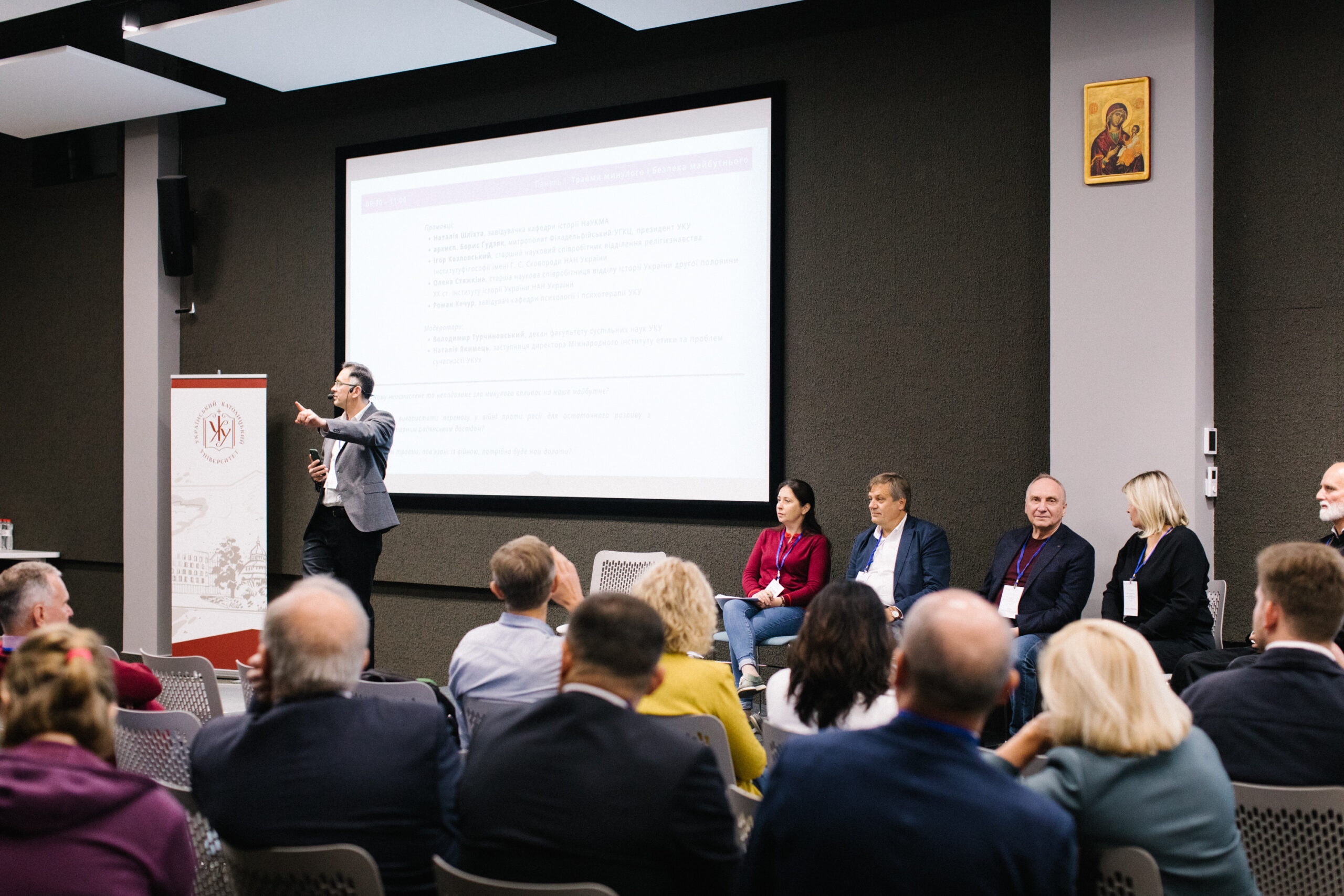 At the center of attention of the fourth conference were, above all, questions of internal problems and tension in Ukraine, the response to which will be crucial for providing its community with peaceful coexistence and relations with neighbors

In thematic panels, the participants discussed the traumas of the past, the safety of the future, Ukrainian identity, the religious dimension, the frontier, and good-neighborliness. We note separate themes from speakers:

Archbishop Borys Gudziak, Metropolitan of the Philadelphia Archeparchy (USA), UCU President: “What is needed to leave the traumas of the past? They need to be named. This has already happened with Nazism. Both the West and the Communist world acknowledged Nazism. It is now one of the biggest taboos in a global context. Putin in Russia uses the trauma of Nazism to assert racism, because it is a common denominator. The whole world agrees that Nazism is bad. This didn’t happen with Communism. Throughout the world a professor can be a communist, no taboo, no shame. So that we know how to deal with traumas, the ones which exist and which are deepening, the process of condemnation should be intellectual, social, and legal in a national and international context, also regarding communism and now regarding racism. It must be named, analyzed, and condemned. It needs to become taboo. Great work stands before us intellectuals: to recreate this spontaneous worldwide, widely spread but clearly not all-encompassing solidarity in a precise understanding of what happened, what is happening, why this can’t be allowed, and what its consequences are. And then we will be able effectively to do what’s needed to heal these wounds.”

Ihor Kozlovskyi, senior researcher of the Department of Religious Studies of the H. A. Skovoroda Institute of Religious Studies of NAS Ukraine: “We live in a unique time. First of all, finally we have a government and instruments of government which can help us work through traumas. There is a civil society which asks questions of the government. And there is a scholarly community which asks questions oriented to the future. Observing people who have passed through trials, I formed a vision of a strategy for transforming trauma into experience. We should, on an individual level and the level of community, acquire skills. The first level is intellectual abilities: when we are aware that there is trauma, we have to verbalize it, reflect, fill it with questions to move further. The second level is existential intelligence. We should see and draw out certain meanings, to find an answer not only to the question “Why is this happening to us?” but “For what purpose?” And here the churches, as part of civil society, will play a tremendous role. The next step is emotional intelligence. We need trust, empathy, and an understanding of how society is traumatized. Next is social intelligence; during captivity, I regularly reminded everyone that it is possible to survive only when you help others. And, finally, creative intelligence.”

Olena Styazhkina, senior researcher of the Department of the History of Ukraine of the Second Half of the Twentieth Century of the Institute of Ukrainian History of NAS Ukraine: “One of a human being’s tasks is to know how to recognize evil and oppose it. If one speaks about the Soviet past, it seems to us that we were unable to recognize evil, because no institutions in authority confirmed that it was evil. Also, our struggle with the Soviets and colonizers was at an amateur level. This means that it needs a daily reflection on what is happening.”

Myroslav Marynovych, UCU Vice-Rector for University Mission: “The sacrifice of today which Ukraine is paying, fighting for its independence, has already changed much in the world of diplomacy. It is enough to recall that the formula ‘nothing about Ukraine without Ukraine’ is today considered generally recognized. However, in order to develop it to a certain extent, the Ukrainian churches should work well on understanding and expressing their subjectivity. For Ukraine will never sing in a monotonous unison: for us, church ‘polyphony’ is natural and organic. However, it is important to work for it to become single-minded, in one harmonious tonality.”

Iryna Ivanchuk, founder of the Believe in Yourself fund: “We see that boundaries between various groups are being erased; they are starting to unite and crystallize like Ukrainian society is; for example, when a teacher on the frontlines conducts an online lecture for his students and his comrades also listen to the lecture. And they see in general what this work looks like. This shows the erasing of boundaries and borders which existed before the war. One single community is forming, which operates on Ukrainian processes. What is happening during the war is a laboratory for us: How can we retain this new experience, this new model of cooperation and not lose it after victory, so that the borders which institutions earlier built around themselves remain open? We must make the ideology of approaching a great goal in small steps the basis of our lives. We need to learn not simply to run a marathon but to live in a new context.” 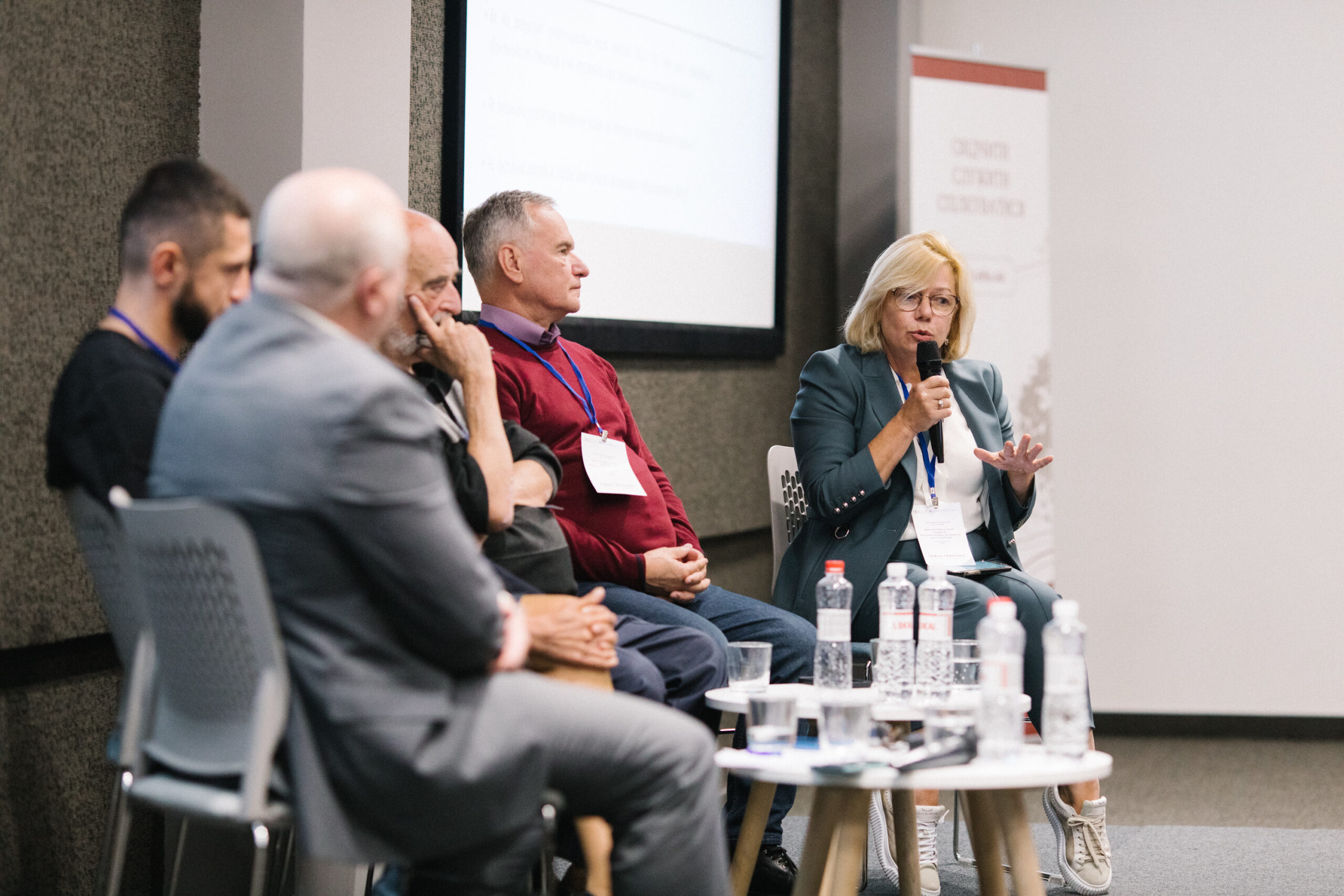 Alim Aliyev, assistant to the general director of the Ukrainian Institute: “In recent months, we have felt the Ukrainian political nation on various levels. For example, I am a Crimean Tatar, a Muslim, with other circles of identity. But, first of all I am a citizen of Ukraine. And today very many people with varied previous experience are fighting for their country. Many challenges and much work stands before us. This includes Ukrainian/Crimean Tatar dialogue, about who the Crimean Tatars are in Ukraine. For the Crimean Tatar people, the answer is clear, both for those who remain in Crimea and for those who were forced to flee. But is this clear for Ukrainian society? This is a question about the Crimea Tatar people as subjects, not simply as a people with roots but as a people who have become one of the main sources of ‘Ukrainian-ness’ in Crimea.”

Iryna Starovoyt, assistant professor at the UCU Department of Culture Studies: “A struggle with an empire is also a competition to root out colonial thinking. Decolonization is a process which does not have a universal formula. But there is at least one motto which should illuminate these processes of decolonization. What is important is what we do with our privileges, whether we always had them or if they’re newly acquired. Do we use them to achieve more justice and solidarity, or to acquire more privileges? The important thing that has happened in Ukraine over the last 10+ years is the post-Soviet transformation to a cruelty-free society. On various levels we have tried to make a more human-centered system, to avoid excessive cruelty. We are now in a situation where the frontier has become the frontline. At this moment, the marginal has become central. For many years, Ukrainian citizens considered themselves at the periphery of the world, and only in recent months are we learning to see ourselves as those who have a decisive word. A colossal transformation in happening, a change of the frontiers themselves, referential links of our knowledge about the world and ourselves.” 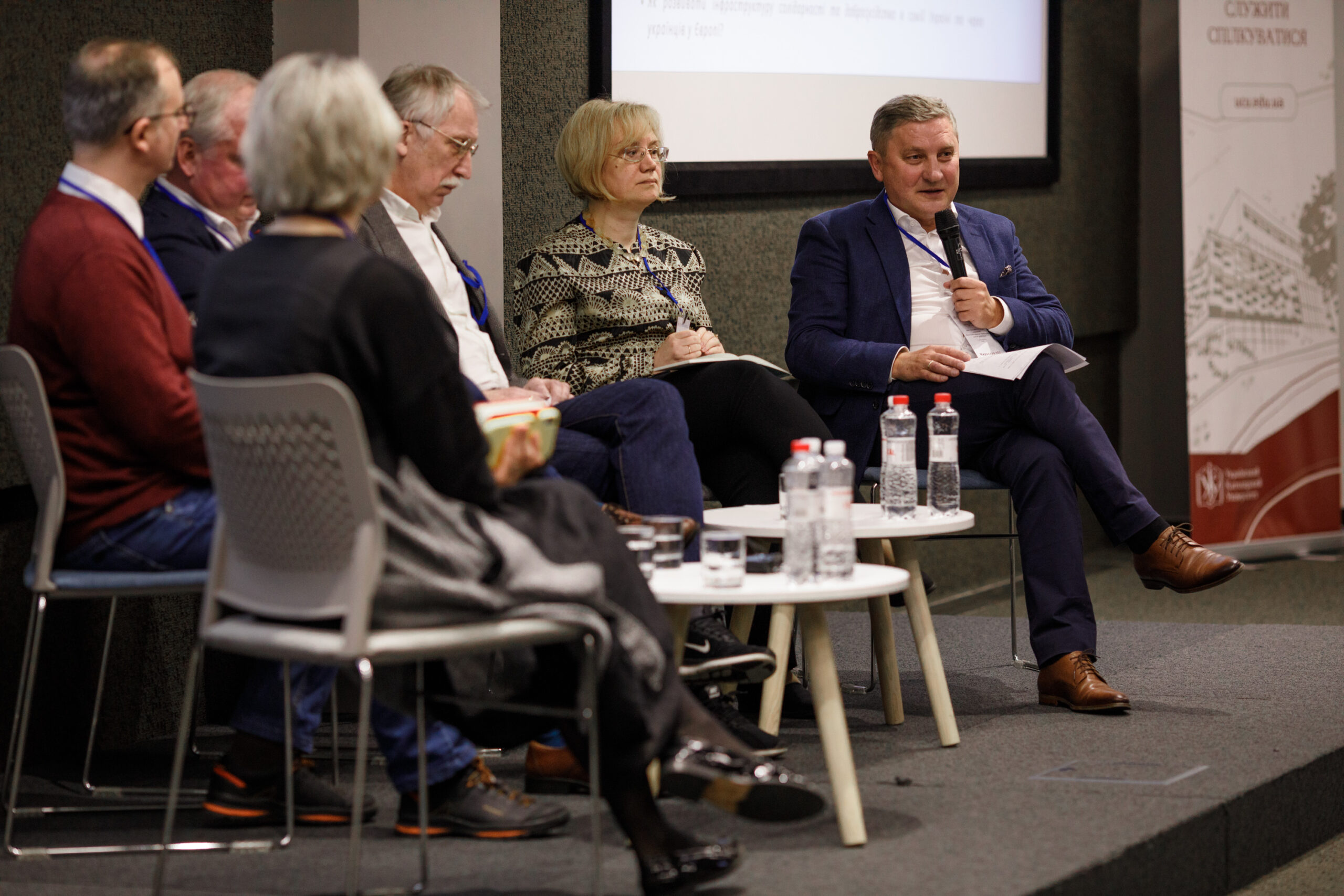 The next conference in the series of visionary meetings is planned to be held in Kyiv.

You can view a full recording of the panel discussions HERE: