Початок: 16:40. Місце проведення: ауд. 424 (вул. Козельницька 2а).
In the 19th century, the Greek Catholic Church sat at the edge of two empires and along a confessional fault line, putting the church at the heart of key developments in European power politics. It was a source of anxiety for conservative leaders in St. Petersburg, Vienna, and Rome, who worried that its confessional and political ambiguity undermined the pursuit of their domestic and diplomatic aims. But at the same time, there was a recognition that the church could, if steered in the proper direction, serve as an asset. The Greek Catholic hierarchy and clergy, in turn, sought to navigate this complex tangle of contradictory priorities. This seminar will discuss the Greek Catholic Church’s role on the European stage in the mid-19th century and its implications for our understanding of the relationship between confessional allegiance, imperial governance, and international politics. 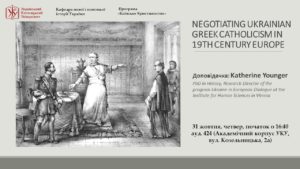