“Mostly in speeches they tell you how to achieve success: Plan, work, don’t be passive, and you will have a successful career. I agree with all this, except the last point. A successful career does not mean a successful life. A career is an instrument to finance your life. You are not identified by your profession: doctor, teacher, lawyer. You are not simply reduced to your profession. What you are is much more than what you are involved in.” So stated Professor Victor Rud, Chairman of the Committee on International Affairs and Foreign Policy of the Ukrainian American Bar Association, during the commencement ceremonies held on 9 February at the Ukrainian Catholic University. 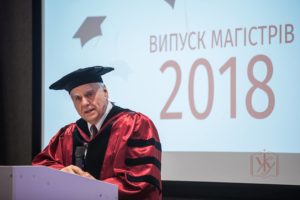 On that day graduates of 7 masters’ programs received diplomas, in social pedagogy, history, theology, graduates of Holy Spirit Seminary, the program in human rights, the data science program, and the non-profit management program. The last three had their first graduating students.

“Most important is what I acquired while studying at the program: the ability to think analytically and strategically.” So social pedagogy graduate Tetyana Mikula shared her impressions. She had earned a bachelor’s degree and now a master’s in social pedagogy. She is successfully developing an educational project for children, UCUkids, on the basis of UCU’s Social Pedagogy Department. “If among your dreams, the one in first place is to change the world for the better, you will learn here how to do this professionally,” admitted Mikula.

Kira Menaker, a graduate of the Non-Profit Management Program, dreams of opening a hospice in Odesa for older people. Even before entering UCU, for a year and a half she worked at the charitable organization Caritas Odesa UGCC. She coordinated projects and also directly initiated charitable activities. She says that the greatest thing gained during her time at UCU is the people with whom she was fortunate enough to study: “I am still boundlessly proud of getting acquainted with each of them. And the program also expands the limits of your possibilities.” 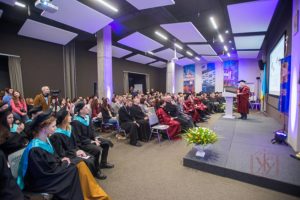 Ivan Yavnych, a graduate of the Master’s Program in Human Rights, was inspired by the atmosphere that reigns at UCU. “Here I learned to think, as they say, outside the box, and concisely to express my thoughts,” stated the young man.

“It’s possible to look for favorable conditions for a long time. But the time comes when it’s necessary to take root.”

To grow, to flourish, and to bear fruit. Those are the wishes to which Oleksii Molchanovskyi, director of the Data Science Program, addressed the graduates. His metaphor of a university is fairly simple and understandable: a garden in which teachers are the gardeners and students the trees that bear fruits.

“The university is not only walls but a community which forms us. Here we meet critics and mentors. This is a place where many worlds meet: academic and scholarly, entrepreneurial and business, and also the spiritual world. The university is an environment of possibilities and growth. It’s a garden open to various influences, various phenomena, where grow many trees which bear fruits. Here teachers like gardeners take care so that all the trees bear fruit. As fruit should grow from an apple seed, so our goal, our calling should grow from each of us. To grow means to be yourself, to take root in the ground where you are standing. It’s possible to look for favorable conditions for a long time. But the time comes when it’s necessary to take root and grow in a certain area. Be open to others’ thoughts and share your ideas with others. The best way to test an idea is to share it with the world. A valuable idea will only gain strength from this. We want to know you by the fruits of your professional and civic activities,” said Oleksii Molchanovskyi. 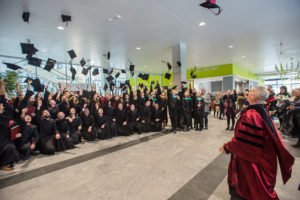 “Don’t reproach people who criticize you, but be grateful for the advice.”

“Value life as a sacrament and never tire of getting to know the world.” That was the challenge of Father Rector Ihor Boyko of Holy Spirit Seminary for the graduates. “Don’t think only about yourselves but dedicate your time to others. For at the end of life we all will stand before the question of what we did for the community in which we lived. So ask yourselves: What am I doing with the time given me? Do I think only about career, money, or do I think how I can make society better? When we give life to others, then it gains meaning. Life is a great treasure which cannot be wasted. Value what you have learned and spread hope where you are. Don’t be demanding. Be grateful. Don’t regret that you still don’t have enough money, but be thankful for what you have. Don’t reproach people who criticize you, but be grateful for the advice. Don’t complain about your work but be thankful that you can use the time of your expectations in the best way.”

“Before you is the difficult path of a new choice.” So Father Rector Bohdan Prach noted in his words of greeting. “You have completed the time of your ripening and now will bear fruits. I believe that you will do this well. We congratulate you and pray for you. We together will create one great UCU family.”