This year the student team of the UCU Master’s in Law in Human Rights Program debuted at the 23 rd Ukrainian National Round of the Philip C. Jessup International Moot Court Competition, held in Kyiv on 9-11 February 2018. Based on the results of this round, the UCU team will be able to continue the competition in Washington. 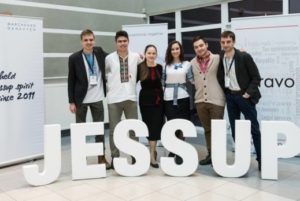 Eleven teams took part in the competition, and the UCU Master’s in Human Rights Program team is going to the semifinals. In addition, UCU student Natalia Subbotina won in the category “best speaker.”

The organizers of the competition announced that the team can take part in the international competition to be held in Washington from 1 to 7 April 2018 as an exhibition team, that is, the team that demonstrated the best results among the university teams that first took part in the Jessup competition.

The UCU Law School is starting a fundraising campaign to support the UCU team’s participation in the competition in April in Washington. If you or your company would like to contribute, please write us at [email protected]